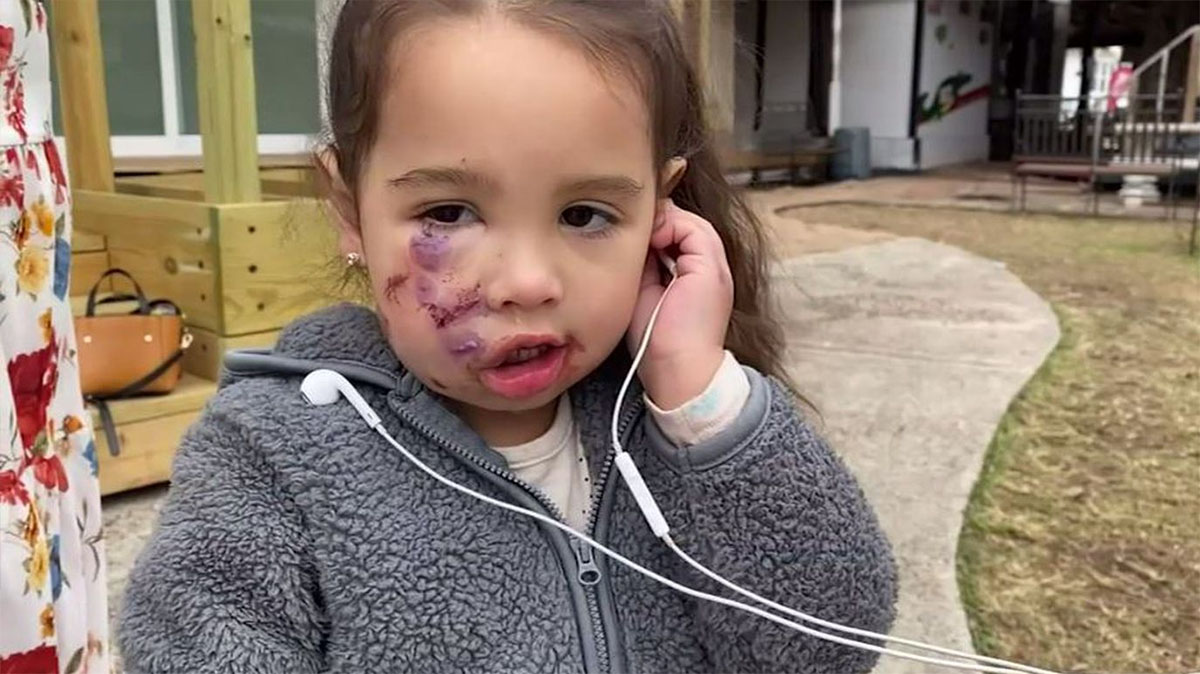 The family of a 3-year-old is facing the prospect their child could be scarred for life after she was attacked by a pit bull dog wearing a service vest in a restaurant.

Dad James Waldroup said he had to chase the woman and the dog after she ran off following the horrific incident in a restaurant in Old Town Spring, Texas.

Family friend Kimberly Parker had gone into the restaurant with the 3-year-old girl Ronin while the parents stayed at the door to fold the stroller, ABC News reports.

As Kimberly followed the toddler to the line in the restaurant she said the little girl came face to face with the dog.

“It had a hold of her face and shook her,” she said. “The lady pulled on the leash, the dog released her and she just dropped like a rag doll.”

Ronin’s mom Cleveratta Gordon-Waldroup took her to the bathroom to assess her injuries while dad James chased after the woman who had run out of the restaurant with the dog.

After catching up with the woman, James told her she needed to stay because of what had happened.

“She yells at me, ‘It’s your daughter’s fault,'” the father said, as per ABC News.

People all around were recording their interaction. The dog owner can be seen being driven away by a man. Waldroup was able to get a photo of the woman and her license plate.

Ronin was taken to the hospital, where she received 15 stitches in her face, according to a GoFundMe page set up to help the family. Doctors have told her parents she’s not likely to have bad scarring but did suggest they speak to a plastic surgeon.

“It’s enough that she’s going to have the mental trauma,” her mother said. “I don’t want her to look in the mirror and have that be a constant reminder of what happened.”

‘It goes beyond words’

The Harris County Sheriff’s Office said they do know who owns the dog and have a meeting scheduled with her.

The family says they want the owner of the dog to be held accountable.

“For them to not show any compassion or any remorse to even stop and ask if my baby was OK, it goes beyond words,” mom Cleveratta said.

All dog owners should be held accountable for their dog’s actions. This dog should not be in an enclosed public space if there is any chance it could hurt someone.

I hope justice is served and little Ronin recovers from her horrific ordeal. Please share.