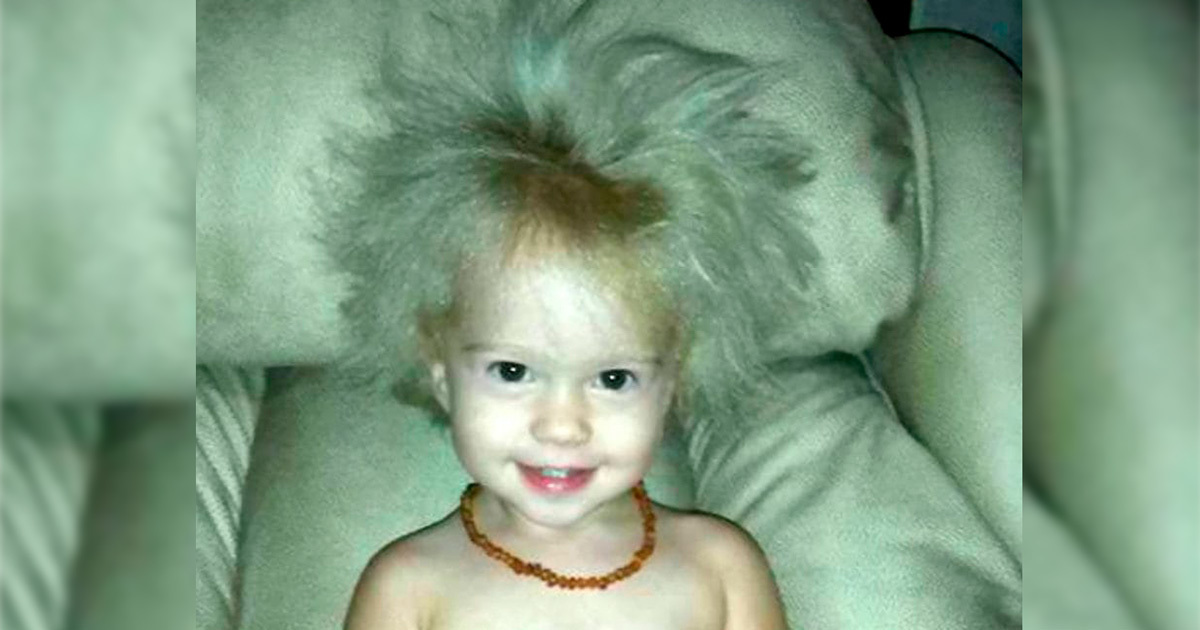 When 29-year-old Sara Lamb from Arkansas gave birth to her daughter Jaili, she had no idea that there was anything different about her. The birth went well and her baby girl was healthy.

Jaili had wispy blond hair, like any other newborn does. Nothing strange about that…

But when Jaili got a little bigger and her hair grew out, Sara realized that something was… well, up. Her daughter’s hair was frizzy and stood on end. Sara tested different kinds of shampoo on her daughter and combed her hair every morning — but nothing helped.

In the end, Sara went to a doctor to ask what was wrong with Jaili. But the doctor’s answer wasn’t what Sara was expecting…

Jaili was two years old when her mom took her to the doctor. Her hair stood up on end and went in all directions. And it also reminded people of the scientist Albert Einstein’s famous hairdo.

The doctors who examined Jaili suspected that she had a rare genetic disease. And after taking a DNA sample, they were able to diagnose the disorder, writes the Daily Mail.

It turns out that Jaili has Uncombable Hair Syndrome, a rare genetic disorder that changes the structure of hair — usually blond — and makes it stand straight up.

Other than this, the disorder has has no negative effects on a person’s health.

You can’t get Uncombable Hair Syndrome unless your parents carry a gene that causes it. And Jaili’s DNA sample revealed that her mom, Sara, carries one of the three genes that causes the syndrome.

But even if a person’s mother carries the gene, it’s still uncommon to have Uncombable Hair Syndrome. Jaili’s sister, for example, has straight dark hair.

Jaili will have her wild hair for the rest of her life, but it doesn’t bother her at all. In fact, she almost always gets compliments when she’s out in public.

“We can’t go anywhere without at least three or four people stopping us to say something. It’s usually, ‘Oh my God, her hair is so cute. She is adorable!'” Jaili’s mother, Sara, tells the Daily Mail.

But Sara also gets angry comments, too. Some strangers think her daughter’s hair looks the way it does because she treats or colors it.

We think Jaili’s hair makes her look cute and gives her a beautiful look all her own! We had no idea that there’s actually something called Uncombable Hair Syndrome, but you learn something every day!

What do you think of Jaili’s fashionable hairstyle? Share this article with your friends and tell us what you think!