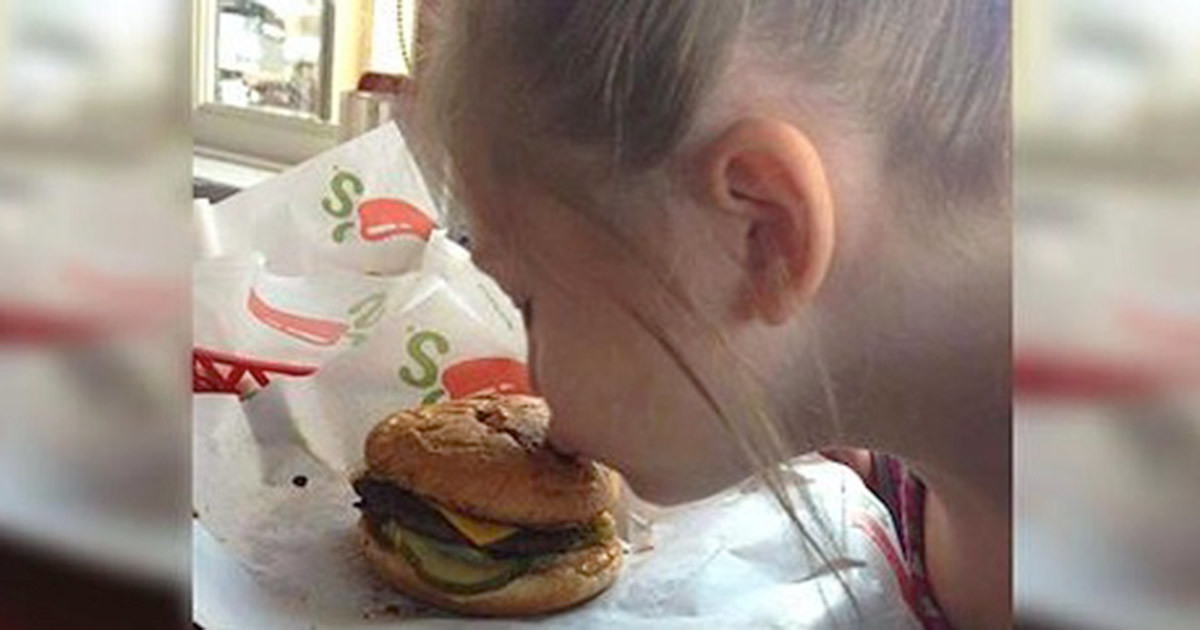 Sometimes small gestures matter the most. That’s something Anna Kaye MacLean was reminded of after a heartwarming incident she had with her 7-year-old autistic sister, Adrianna. She took her to have lunch at a Chili’s restaurant in Utah, USA. Due to her autism, Arianna needs things in a certain order which can often cause problems for them when they are out in public, especially at restaurants. Anna thought this day could be the same – but what happened instead would be an unforgettable experience which she later shared on her Facebook page. You can read the wonderful story and her thoughtful words below.

“I want to share the experience that my husband, 7 year old autistic sister and I had today at the Chili’s location in Midvale, UT. Arianna, my little sister, didn’t waste any time when our waitress, Lauren, greeted us at our table.

Arianna promptly ordered her cheeseburger with pickles, french fries, and chocolate milk before Lauren could even take our drink order. Lauren smiled and told Arianna, “Okay! I’ll be right back with your chocolate milk!”.

When we got our food I was wondering why Arianna wouldn’t touch her cheeseburger, but was going to town on her french fries. I asked her, “Arianna are you going to eat your cheeseburger?” She calmly said, “No, I don’t want it.” Cheeseburgers, or ‘Krabby Patties’ as we sometimes call them, are her FAVORITE! So this behavior was VERY strange. So I asked her, “Why don’t you want it?”. She replied, “It’s broken. I need another one thats fixed.” Then it dawned on me why she wasn’t eating it. It’s because it was cut in half. Being a child with autism, she has to have certain things in a particular order at all times. One slight change in her routine can change the course of the day instantly.

When Lauren came back to check on us, I asked if we could order another cheeseburger and just add it to our check. She had a concerned look on her face so I explained that Arianna has autism, and that in her mind, because the cheeseburger was cut in half, she thinks its broken and can’t eat it. I told Lauren I knew it sounded silly, but if we could just order an additional one we will gladly pay for it because there was nothing wrong with the one that was originally brought out.

Lauren was so sweet and just smiled and went along with Arianna, telling her “I brought you a broken cheeseburger?! You know what, I’ll have them cook you a new one!”

I loved this because rather than just taking it from the table, she actually TOLD Arianna what she was doing. While this seems insignificant, by her telling Arianna what she was doing, we avoided a melt down. The manager, Bradley Cottermole, then came to our table, kneeled down, and said to Arianna, “I heard we gave you a broken cheeseburger! I am so sorry about that! We are making you a brand new one that isn’t broken, with pickles! I’ll bring you some french fries to munch on while you’re waiting, ok?”

A couple of minutes later, Lauren arrived back at our table with cheeseburger #2. Arianna said, “OH FANK YOU! You fixded my cheeseburger!”

When Lauren walked away, Arianna just sat there for a second and looked at her new burger. She looked like so deep in thought….just staring at it….then she let out a big ”OH I missed you!!” and started kissing the burger over and over again. I showed Lauren this picture and said, “I think we glorified the cheeseburger too much!” She busted up laughing, and asked if she could go show her manager. She came back a minute later and said she showed everyone in the back kitchen area too, and that it made them all laugh and smile.

I was so touched by this experience. Especially since I know people who have been asked to leave restaurants when their child with autism is being disruptive. I expected a few different things with this scenario based on past experiences, but I did NOT expect such kind and compassionate mannerisms from Lauren and Bradley.

Everyone, from the hostess to the chef, played a role in what most people would think isn’t a big deal. But this entirely shaped how the rest of our day would go. I know…a cheeseburger cut in half literally could make or break our day. In this case thanks to the professionalism of the crew in Midvale, it made our day. And I’m sure Arianna brightened up at least one of the employees days with her silly little personality. Thank you.”

Please share this wonderful story and Anna’s words on. We can all make a huge difference in someone’s life through small, simple gestures. We should remind each other of that every day.