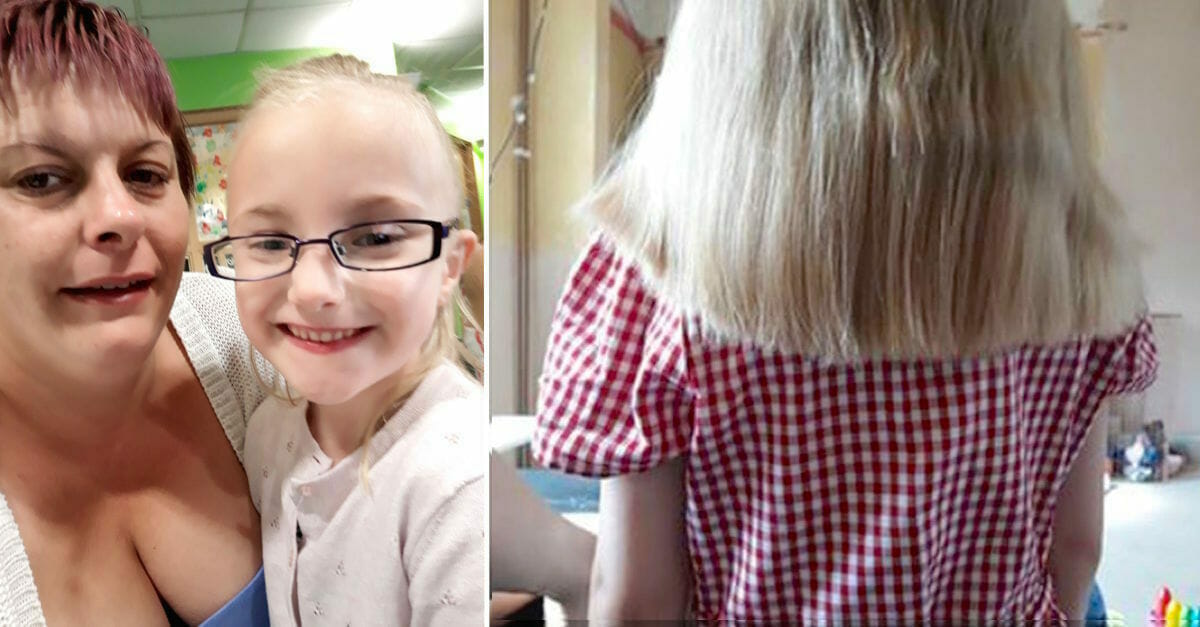 To have children is to know what real worry is; just sending them off to school every day can be a worry for the encounters they may have to face.

I can’t imagine the heartache and worry for those parents who send their children to school every day knowing they are being bullied.

This is often true for middle school where children can go from sweet and cute to cruel and mean in a short space of time.

When it was time for Melissa to start school, Samantha was understandably worried but never expected the events that have occurred in her young child’s life and for the school’s response.

Melissa started first grade at a primary school in Derbyshire, England and seemed to get on well, until her mom started noticing her hair was getting shorter.

Her mom Samantha said since Melissa started school every few months she would come home with her hair cut.

“She has come home with her hair cut six times so far,” Samantha told the Metro newspaper.

“The first time it happened, the school spoke to the children about how dangerous scissors are.”

Samantha said when it happened again, she spoke to the principal but didn’t get the response she expected.

Finds it difficult to grow her hair

“In September her hair was halfway down her back. No matter how many times it has happened, nothing serious has been done about it.”

The thought that the other kids were bullying her daughter by cutting her hair was devastating for worried mom Samantha.

“Every time it has been cut, I have to cut off another one to two inches to get it straight again, but it takes a while to grow back.”

Gets in with the wrong crowd

Samantha told British newspaper the Metro that her condition affects processing in her brain, has made it difficult to form complete sentences and hearing issues which affect her behavior.

“I think because of her condition she gets in with the wrong crowd as she doesn’t understand the difference between what is naughty and what is good.”

Samantha now wants the school to stop the kids using scissors but was told by staff that the pupils need them for their education.

“This is an ongoing problem, the bullies used school scissors to cut Melissa’s hair,” she said.

A school spokesperson told the Metro: “Bullying can have a devastating effect on children and families, and at Cherry Tree Hill Primary School, we take any report of alleged bullying extremely seriously, and will always investigate.”

Now mom-of-three Samantha wants to spread this story to encourage more people to take a stand against bullying and force more schools to take effective action.