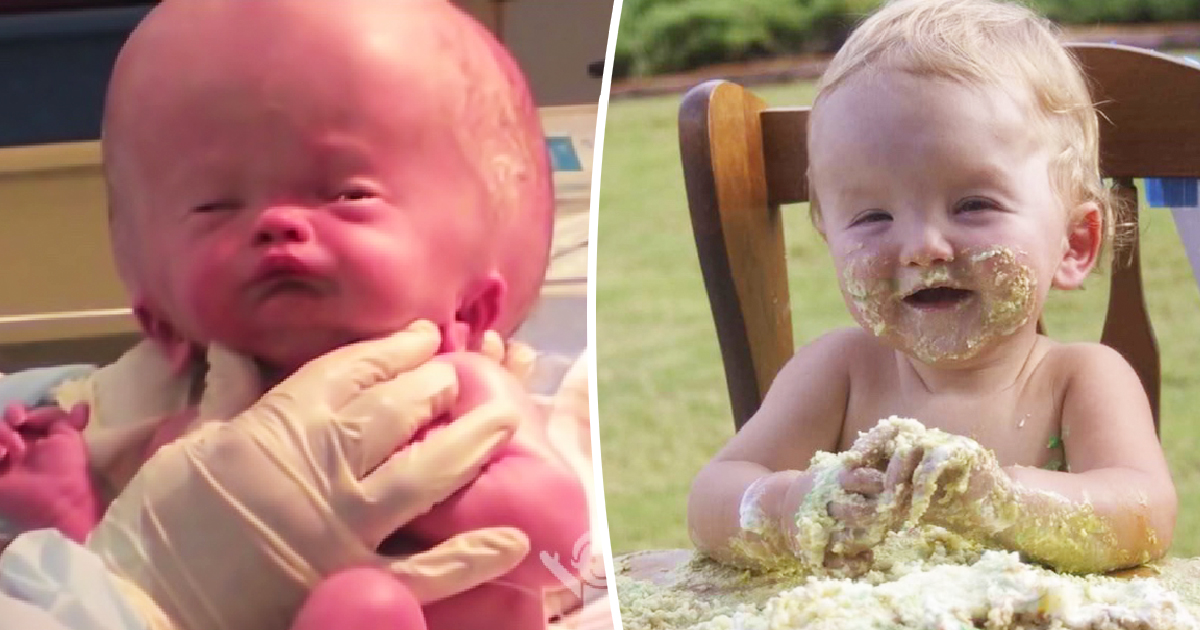 Whether you believe in miracles or not, the story of Parker Grelecki from Georgia is certainly a beautiful example of one that may really be true. Little Parker’s journey is, just as his dad describes it, a journey of unconditional love.

Parker was born in 2008 with hydrocephalus, a condition in which leads to an abnormal accumulation of fluid in the brain.

For Parker, that meant that his brain made up only five percent of his skull – as compared to the 90 to 95 percent found in normal babies.

Hospital staff warned his parents to prepare for the worst, but it soon became clear that their little boy was not about to give up…

Most parents use the old saying “We don’t care if it’s a boy or girl, all we want is for the baby to be healthy.”

Sadly, not all parents have the luxury of raising a healthy child – just ask Crysie and Ryan Grelecki, from Marietta, Georgia.

In 2008, they were over the moon when they found out Crysie was pregnant. But 20 weeks into the pregnancy, the parents received devastating news during one of the first ultrasounds.

The nurse noticed how their then-unborn son, Parker, had a larger-than-normal head. She immediately understood that something was wrong so and called for assistance. Parker’s situation was both serious and startling, all the doctors who examined his scans agreed.

It turned out there was a blockage between the third and fourth ventricles of Parker’s brain, one preventing the spinal fluid from draining. As a result, fluid was building up and squeezing Parker’s brain matter against his skull. The condition apparently occurs in two of every 1,000 births in the U.S.

When Crysie and Ryan Grelecki received the news about their baby’s abnormality, they were shocked and concerned. But they did what all parents should do: they stood by their unborn child – unconditionally.

“Throughout my pregnancy when I would let my thoughts spiral downward with thoughts of “what if” and just plan fear, God would remind me of a song. The lyrics that would play over and over in my head and fill me with His peace went like this – “God will make a way, when there seems to be no way, He works in ways we cannot see He will make a way for me … He will be my guide, hold me closely by His side, with love and strength for each new day God will make a way,” Crysie shared on her Facebook.

Usually, a newborn baby has 90-95% brain matter and 5-10% fluid within the cranial cavity. When Parker was born in September 2008, he had over 98% fluid and just 8 millimeters of brain matter.

He was delivered via C-section at 39 weeks.

Of course, Parker coming into the world was quite the chaotic event. His future looked uncertain, and everyone was unsure if he would even survive, let alone what kind of life he would have ahead of him.

Thankfully, he had fantastic support from his parents – who loved their precious baby boy more than anything.

“I was by his side the whole time—talking to him, praying over him, holding his hand, rubbing his head. That unconditional love just rushes over you, and here is this helpless baby that’s been entrusted to me and I can’t do anything for him,” Ryan told.

At just two days old, medical experts at Children’s Healthcare of Atlanta started to drain the excess liquid from his skull and relieve the pressure. That in turn allowed Parker’s brain to grow and develop naturally.

After that, he began to undergo operations. Doctors performed craniofacial surgeries to correct his skull malformation, but they knew they were facing a huge challenge.

“Our goal was to go in and re-expand the skull, open the skull up and separate those bones that had grown together. And, that was basically what we did— getting the space for his brain to grow and grow normally,” recalls Joseph Williams, M.D., Chief of Plastic and Craniofacial Surgery at the hospital.

By the time Parker celebrated 20 months of life, he had undergone seven successful surgeries, and his recovery amazed everyone. According to mother Crysie, it took Parker some time to sit and keep his head up, but ultimately he prevailed.

Parker also skipped the common crawling stage and began to walk right away instead. Parker’s parents say they owe a lot to the Children’s Hospital in Atlanta and its staff, who eventually felt like an “extension” of their own family. The staff at Children’s Healthcare of Atlanta really took Parker to their hearts.

Parker’s recovery is just one of many of the hospital’s remarkable success stories, which is world-famous for its rehabilitation program.

Besides being part of the official therapy, Parker attended many activities to help with his muscle development. For example, he played tennis and took swimming lessons along with his siblings.

Now, Parker, with glasses and a head full of golden hair, is almost unrecognizable from the day he was born. Looking at this wonderful boy today, he’s far exceeded the expectations of virtually all medical experts. According to UGA Miracle, Parker excels at school.

“He should also have trouble interacting with others and after meeting him for two minutes it is apparent God has given him a very engaging personality,” UGA writes.

Despite being born with less than 2% brain matter, Parker Grelecki is a living miracle.

“As parents, we are beyond thankful to be Parker’s parents and continue to watch him progress and live out the Lord’s plans for him,” Ryan and Crysie Grelecki says.

His proud mother describes him as a “chatterbox” and a “loving child”, and it’s clear that he feels all the love around him – not only from his biological family but also from his family at the hospital.

Parker’s brother and sister, Chase and Emily, have also been great support. Growing up with a brother with special needs has made Chase and Emily advocate for those who may not get the respect they deserve.

“As parents, Crysie and I have come to recognize that having two children born without complications is in fact a true miracle. Parker’s story has created a family full of miracles,” Ryan and Crysie Grelecki said.

In September 2022, Parker will celebrate his 14th birthday. Even though he’s been through many things that most people won’t have to deal with in a lifetime, he has a lot of great years ahead of him. For a long time, Parker has dreamed of working as a sports commentator.

That brain with three pounds of fluid and less than 2% brain matter is the same brain that today is so intelligent and can remember endless amounts of sports knowledge. Parker has also tried his dream job several times – and he’s a natural talent.

Sometimes, he also helps out as an announcer for his local high school football team. According to witness reports, he’s amazing at what he does and Parker’s excitement during the games is contagious.

Of course, Parker has his struggles directly linked to the brain damage – but given what he has become, we think he’s a true hero and a very inspiring person as well. I would be proud if I had only half of his gregarious and charismatic personality. He seems to be such a sweet boy!

Isn’t the strength that dwells in us humans just amazing? Thanks to all hospital staff to help children to get life back!

What a precious little man. God bless Parker and his family.