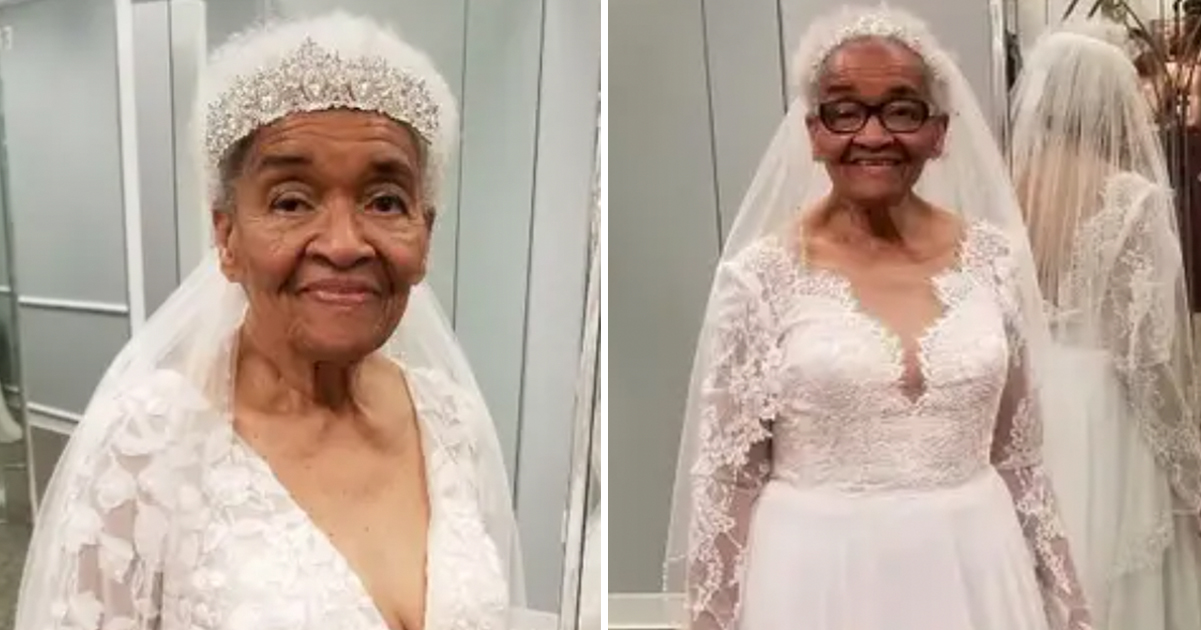 Times and customs are ever changing, and for the most part that can only be a good thing as we press on towards a more enlightened future.

One individual who can most certainly attest to the benefits of societal evolution is Martha Mae Ophelia Moon Tucker, a 94-year-old woman who was able to fulfill a lifelong dream of wearing a traditional wedding dress … almost 70 years after she was refused the right to wear one back in 1952.

As per reports, Tucker was one of many victims of racial segregation laws in the 1950s. She lived in Alabama, where at the time Black people were not allowed to enter bridal boutiques.

I think I can speak for all of us when I thank God for the many changes we’ve seen over the past half century or so.

It was Tucker’s granddaughter, Angela Strozier, who treated her grandmother to a surprise wedding-dress fitting on July 3 of this year (2021).

Angela shared their emotional story on her Facebook page the day after – unsurprisingly there was a lot of people who found a bittersweet joy in reading it.

Angela told Insider that she and her grandmother had been watching the flick “Coming to America” when the latter leaned over and whispered something in her ear.

Tucker said to her granddaughter: “I’ve always wanted to try on a wedding dress. I didn’t have one when I married.”

Angela continued: “During that time, Jim Crow law was live and in color and, unfortunately, segregation was the way of life. So with her being a Black American, she was not allowed inside of white establishments.”

Instead of a traditional wedding dress, Tucker married her late husband Lehman Tucker Sr. while wearing a navy-blue dress that would later come to be known as a “Carmen Jones” dress.

What’s more, Tucker was forced to rely on the white woman whose house she worked at in 1952 to buy said dress for her.

Having heard her grandmother’s tragic story, Angela decided to act. Mere days after the revelation, Angela arranged a surprise wedding-dress fitting at David’s Bridal boutique in Hoover Alabama, including a makeover from a make-up artist!

”I looked in the mirror at myself wanting to know who that is,” Tucker told ABC. “Yeah, I was very excited! I felt great! I told ya, it felt just like I was getting married!”

Angela said her grandmother was “overwhelmed with happiness” at getting to try on the dress (she was reportedly drawn to a low V-neck and embellished waistline, the dress she’s wearing in the image above).

“She’s always made sacrifices to give from her heart,” Angela said. “So to return a gift from my heart to her was priceless.”

Tucker, mother to 4, grandmother to 11, and great-grandmother to 18, was an active voice in the infamous fight for civil rights. Her efforts spanned an incredible 11 political administrations, beginning when President Lyndon B. Johnson was in office.

After the outpouring of positive attention regarding her grandmother’s dress-fitting, Angela joked: “Now she’s saying, ‘Do you think Oprah may call me?’ I said, ‘I don’t think so Grandma.'”

Wow! My heart is warmed beyond belief by such touching stories! I don’t know about you, but I think we could all do with a little more news like this in our lives to counteract the evil that seems to be rampant in the world.