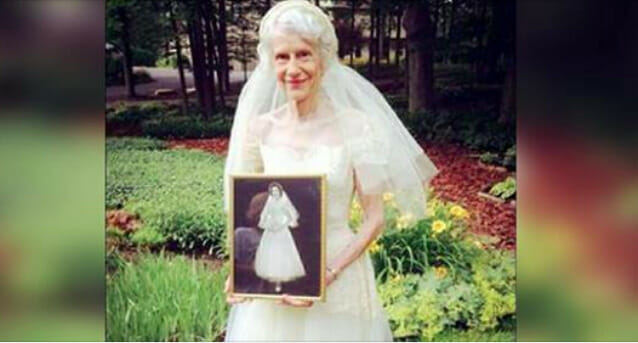 The bond between mother and daughter is one of the strongest out there. But we sometimes underestimate just how much love also exists between grandparents and their grandchildren.

I recently came across a wonderful story that depicts such a bond — and felt I just had to share it.

Amy Buchan Kavelaras one day went by her grandmother Ruth’s house to help her move. As they packed and moved carton after carton, they suddenly found a box containing something very special.

After some persuasion, Amy managed to convince Ruth to try that ‘special something’ on.

It was her wedding dress, which she had not worn in 63 years.

Then, as Ruth stood wearing the dress and holding up one of her old wedding photos, Amy’s mom who was also present, snapped a picture.

And what an amazing picture it would be.

What could be better than an epic family selfie? Missing a few of us but at least Grammy made the pic!???

She attached the following note to the photo:

“While packing up my grammy’s house to move her into an assisted living facility next month, we found her wedding dress in her attic! 63 years later she tried it on and it still fits!

This is a picture of her holding her original wedding photo from 1953. My mom (their daughter) is taking this picture and you can see her face reflecting off the glass.

My grandma Ruth stayed married to my grandpa Jack his entire life until he died in 2000. She misses him every day. They had a love that spanned the ages.”

Happy 90th birthday to my beautiful "Princess Grammy"!!! We threw a surprise birthday party at her retirement home today…

Jack’s death was the hardest thing Ruth has ever had to experience, and wearing the wedding dress was a very emotional moment for her.

It required a lot of courage to dare wear the dress along with all the memories it carried.

But I’m so glad that Ruth did. She looks simply amazing — both on her wedding photo and on the new picture, 63 years later.

"While packing up my grammy's house to move her into an assisted living facility next month, we found her wedding dress…

What a beautiful picture and moving story!

Share this article with your friends on Facebook so that more people get to see the wonderful photo!