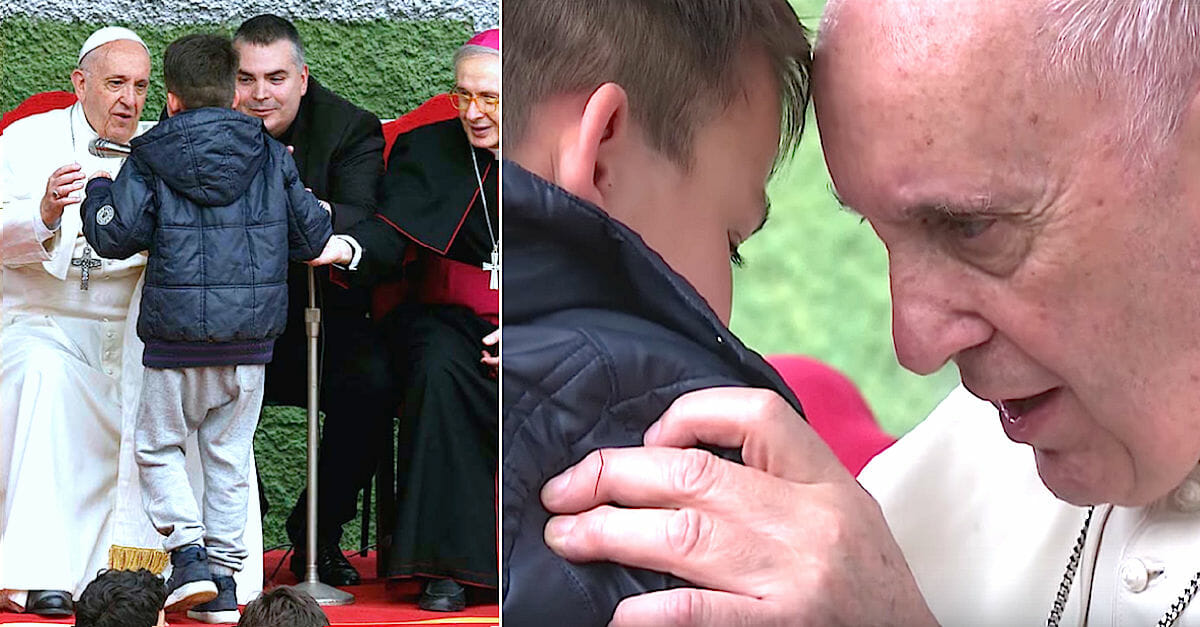 Sometimes opening up on the loss of a loved one can be a difficult process. This is made all the more pertinent when you’re a child who might not fully understand what’s going on.

I can remember vividly the first family member I lost at a young age. I remember the confusion first and foremost; the wondering what death truly meant. It was my grandpa that had died, and at that point it was virtually beyond my comprehension. I can only imagine the effect losing a parent must have.

Unfortunately, Emanuele has suffered through the loss of his father. So, when Pope Francis paid a visit to the St. Paul of the Cross Parish in Rome earlier this month, Emanuele had a question for him. After mustering the courage, he whispered it in the Pope’s ear. His Holiness’ response left chills rippling through the parish …

When Pope Francis paid a visit to the St. Paul of the Cross Parish in Rome, Emanuele was given the chance to ask him a question. Since Emanuele’s father had passed away the year before, he had a burning doubt in his mind.

Just as the boy was about to ask his question, however, he froze up in front of the gathered audience, crying “I can’t do it.”

The Pope responded with kindness, beckoning Emanuele to his side. “Come to me, Emanuele. Come and whisper it in my ear.”

With some encouragement from the papal aide, Emanuele went to Pope Francis’ side and broke down in tears. The two hugged and shared a moment as they whispered to one another.

When Emanuele returned to his seat, the Pope again addressed the parish. He said he’d asked the boy if he could share his question with others, and the boy had consented. “If only we could all cry like Emanuele when we have an ache in our hearts like he has,” His Holiness said.

The pope then revealed what Emanuele had asked, along with his response. When he did so, chills swept through the crowd. You can see all of it in the video below:

What an inspiring video. Believer or not, you have to commend the way Pope Francis handled the situation, and perhaps find comfort in the words he shared.

Share this touching video to show everyone that it’s OK to talk openly about grief and loss.