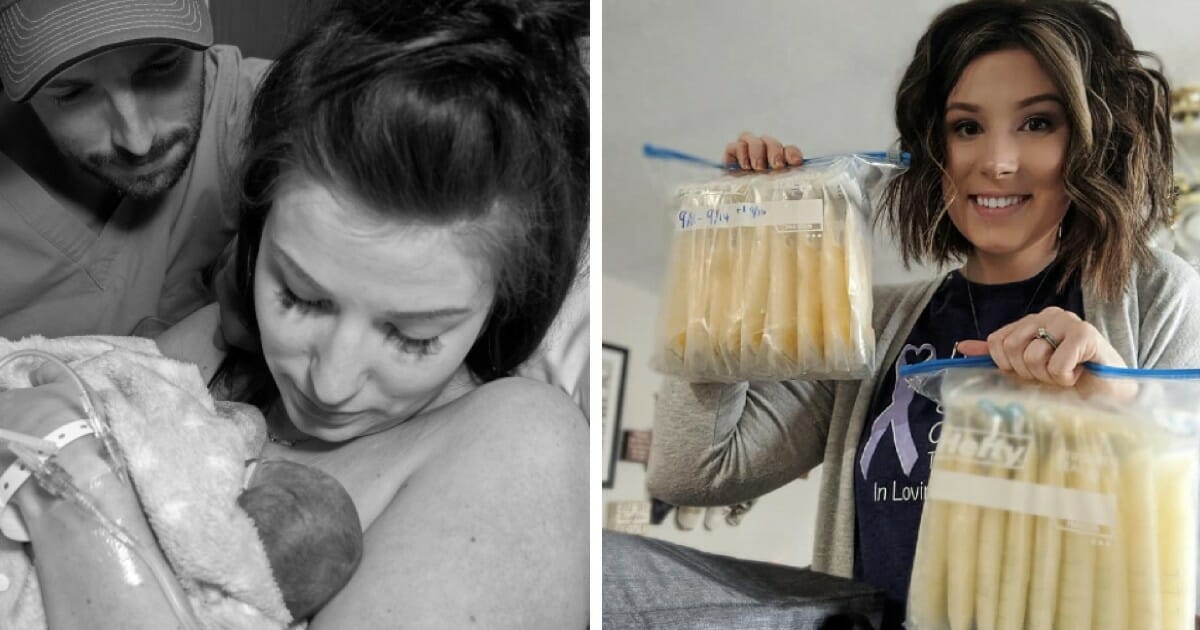 After Sierra Strangfeld learned she was pregnant with her second child she was excited at the thought of giving breastfeeding another try. She tried with her daughter, but wasn’t as successful as she would have liked.

“So I was like I’m better now, I went through it once, I know what I’m doing now,” she told WEAU.

But several months into her pregnancy she learned her child had trisomy 18, a rare chromosomal abnormality. Doctors informed her and her husband, Lee, it was unlikely their unborn child would survive.

Sierra never had the opportunity to breastfeed her son, Samuel, but for 63 days after his birth she continued pumping breast milk and on what would have been his due date, she donated 500 ounces of milk.

Five months after Sierra learned she was expecting a son, the couple discovered their unborn child had trisomy 18. It was an “earth shattering” moment.

On September 5, after months of genetic testing, questions, and lots of prayers, Sierra had a full day of appointments. At her ultrasound, Sierra’s doctor said Samuel would likely die before birth.

The doctor advised against a C-section, but Sierra wanted to meet her baby boy.

“If a C-section meant a better chance of meeting him alive, that is what I want,” she recalled saying.

Within hours, Samuel was born via C-section.

“They placed our Sweet Samuel next to my head,” Sierra wrote on her blog. “The happiest and scariest moments of my life.He was here. But he was struggling.”

We had three amazing hours (that felt like minutes) with our sweet boy.

But before Samuel died, Sierra made a promise. She would pump her breast milk and donate it in honor of her son.

“I couldn’t save Samuel’s life, but maybe I could save another baby’s life,” she wrote on Facebook.

“There were times I was angry because why did my milk have to come in when I had no baby to feed?,” she wrote. “Why was I waking up in the middle of the night for this? The other part of me felt it was the only thing connecting me to Samuel here on Earthside. I sure hope he’s proud of me!”

On November 13, Samuel’s due date she donated her breast milk to a local NICU in Wisconsin.

She described the moment she donated all of the milk as a “sense of healing.”

“I kind of felt like it was the end of our journey so to say. Not that I’m moving on but now it’s time to move forward,” she told WEAU.

“We promised him we would tell his story, but we never expected it to go nationwide like it has,” she told PEOPLE. “This is his story to tell, and he is certainly telling it though every Facebook like and share, and through every news article. Our goal is to have a non-profit organization is Samuel’s name called Smiling for Samuel — we have big hopes and dreams to carry on his legacy.”

Sierra, you are a hero. I can’t imagine the pain you must have suffered the past few months and then to donate the breast milk that should have been for your baby boy. Thank you for your generosity.

Share this to thank Sierra and show your support.