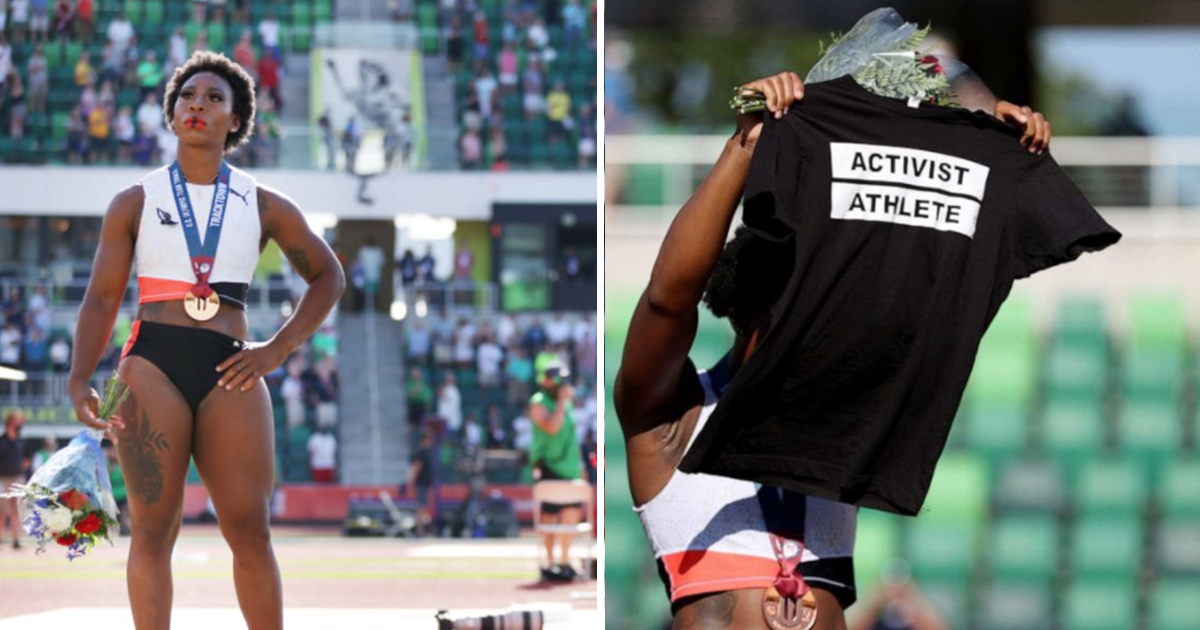 Gwen Berry, the athlete who caused controversy when she turned away from the US flag during trials for the upcoming Olympic Games in Tokyo, Japan, has defended her actions.

Elaborating on her stance, which saw her turn away from the flag after securing her place in the US team for the forthcoming games, Berry said the US National Anthem “disrespects” Black Americans.

The 32-year-old had also covered her face with a t-shirt that read “activist athlete”, evoking the ire of conservatives all over the country.

In response to Berry’s protest, the White House appeared to back her up rater than criticize her, with press secretary Jen Psaki addressing the situation on Monday.

When asked if President Joe Biden thinks Berry’s actions were “appropriate… for someone who hopes to represent Team USA,” Psaki said that she hadn’t discussed the matter specifically with the president, but said Biden is “incredibly proud to be an American and has great respect for the anthem and all that it represents, especially for our men and women serving in uniform all around the world.”

Psaki went on to say that “part of that pride in our country means recognising there are moments where we are — as a country, haven’t lived up to our highest ideals, and it means respecting the right of people, granted to them in the Constitution, to peacefully protest.”

In the wake of the critcism, Berry appeared in an interview with BNC News on Tuesday, July 29, and clarified that she believes the US National Anthem, The Star Spangled Banner, “disrespects” Black Americans.

She said: “If you know your history, you know the full song of the national anthem, the third paragraph speaks to slaves in America, our blood being slain… all over the floor.”

The athlete added: “It’s disrespectful and it does not speak for Black Americans. It’s obvious. There’s no question.

“I never said that I hated the country – never said that. All I said was that I respect my people enough to not stand or acknowledge something that disrespects them. I love my people, point blank, period.”

Amongst Berry’s fiercest critics is Texas Congressman Dan Crenshaw, who went as far as to say she should be removed from the US team for the upcoming Olympic Games.

“We don’t need any more activist athletes… she should be removed from the team,” Crenshaw told Fox and Friends earlier this week.

I don’t know how you feel about the situation regarding Berry, but I think everyone has a right to air their opinions and make their voice heard.

Do you support Berry? Did she go too far? Let us know your thoughts in the comments box.