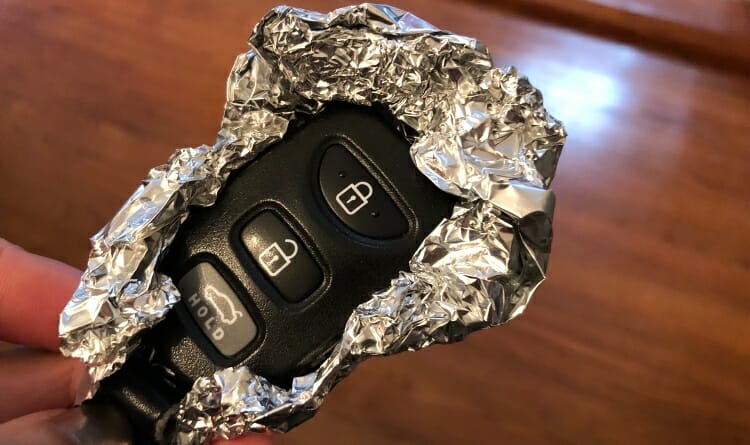 If you have a relatively modern car, the chances are you can unlock it from a distance, sometimes without doing anything but approaching it.

The keyless function means that a driver need only be in the vicinity of the car for the central locking system to be able to open the doors and start the engine.

Of course, as with all technology, there are pitfalls and problems associated with it – things that thieves are doing their best to exploit.

Thefts of cars with this new feature have been on the up, but you needn’t be the latest in the line of people left exposed.

Firstly, it’s important to understand how the keyless system works. In plain words, there’s a computer chip inside your key, one that has a unique code synced with your car’s security system.

Inside your car is another chip containing the same technology and code. When the codes match each other, it instructs the car to open the doors.

Now, most keys require you to be within 30 centimetres of your vehicle, making it difficult for people to take your car before you get to it.

However, if you’re parking your car in a public lot – take for example within a shopping mall – thieves can amplify the radio signal from the key. It’s a relatively simple and effective way of stealing cars, and one that thieves continue to get better at.

According to Swedish site ViBilägare, there are even those who survey residential areas in the hope of finding cars with this feature. With their technology, they can capture the signal from the car key inside the house, and then unlock the car and take it.

Once the car has started, the key is no longer needed. If there’s plenty of fuel in the tank, this means they can get well away from the scene of the crime, sometimes before anyone even notices their vehicle is missing.

At a later stage, these stolen cars are then dismantled and re-encoded with new keys.

How to stop it happening

German car organization ADAC tested the methods used by thieves when it comes to amplifying the signals from the ignition key. 22 car models from dozens of manufacturers were put through the test, and every single ‘thief’ was able to unlock the car and drive away.

However, by placing the key in aluminium foil, you can create a barrier preventing electric signals and radio waves from passing.

According to the police, if the ignition key is wrapped in foil, it’s significantly harder for thieves to capture the signal and take your car.

If you want to make sure it works, try approaching your car whilst your key is wrapped in foil and see if your car still opens.

So long as the key is sealed, no signal can escape and unlock your car.

Were you aware this type of car theft had increased? Did you know about the simple tricks to foil car thieves?