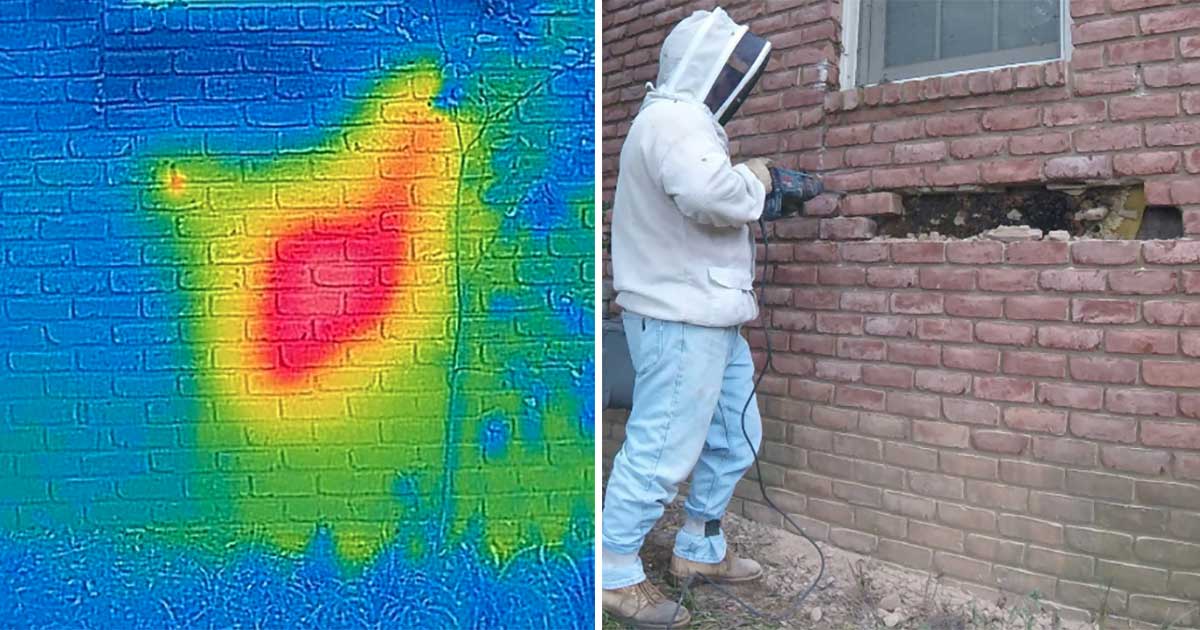 In a perfect world, humans and animals would enjoy an existence wherein in they could complement each other and never suffer negative effects.

Of course, we don’t live in a perfect world, and often do we need to call experts when the worlds between humans and nature collide. That was the case when a homeowner in Tennessee began to hear strange noises in his home. What perplexed him most was that they appeared to be coming from inside a brick wall …

In late September, the homeowner decided to turn to expert David L. Glover for help with his uninvited, unexpected guests.

David’s been doing his job for a good many years, but even for him it would turn out to be a special call-out indeed.

“Every once in a while I get a call that makes me cringe,” David wrote on his Facebook page, The Bartlett Bee Whisperer.

You see, David is an expert in moving colonies of bees from where they’ve settled in and around people’s homes.

Right about now looks like a good time to explain a bit about the importance of our buzzing friends. After all, bees are the pollinators that keep our planet alive; they’re indirectly responsible for feeding as much as 90% of the world’s population.

That said, even though they might not be as angry or aggressive as wasps, they’ll still defend their nest to the last in an emergency.

Unfortunately, these hard-working insects have a tendency to sometimes build their abodes around human constructs, often leading to complications and problems down the line. In this case, they’d set up base inside a brick wall, making it necessary for David Glover to come out and attempt to relocate them.

As David himself explained, it was far from a simple mission.

“I prefer to be minimally invasive when removing honey bees from buildings. I don’t like taking out bricks. Will the mortar chip out, or will the bricks crumble?” he wrote.

After using a heat monitor to locate the source of the noise, David realized he was dealing with a large hive indeed.

Well, the large red spot is the brood area of the hive. The thin red line on the left is the weep hole entrance.

In order to ensure he wasn’t met with a giant wave of hostile bees, David blew smoke into the wall to calm them down.

Then he began to carefully remove the bricks, stone by stone, with great respect for the structural integrity of the hive.

After a while, part of the colony could be seen … though it turned out to be only the beginning.

Two rows of bricks out.

The more bricks David pulled away, the more bees wax could be seen. While David understood just how large bee colonies could grow, he was left speechless at the sight before him.

This was far removed from what he’d been expecting when he’d first taken the job.

“This is one of the largest single pieces of comb I’ve ever seen!” David wrote.

This is what I mean by AWESOME. The comb wasn't overly-attached to the bricks AND this is one of the largest single…

Slowly but surely, David turned his attentions to the hive itself.

Fortunately, the whole procedure went well, with both the colony and the bees wax surviving intact.

They were then transported to a local beekeeper, where they can now live undisturbed and continue to make their honey!

These bees were extremely cooperative to be queenless.

Despite nine years in the profession, David was amazed that the bees could construct such a majestic colony.

In addition, they did so within a brick wall! What incredible creatures they are.

“As much as I dreaded removing the bricks, the final view of the hive was AWESOME! The homeowner was more than pleased that we were able to remove and relocate the bees and their hive,” Dave wrote.

At the bottom of the front comb were five of the thirteen capped queen cells in this hive.

What a fantastic spectacle. Bees really are cool little insects – so inventive and skilled!

Please share this article with your friends so they can not only learn a little bit about bees, but also gain a new respect for just how important they are to humans as a whole!