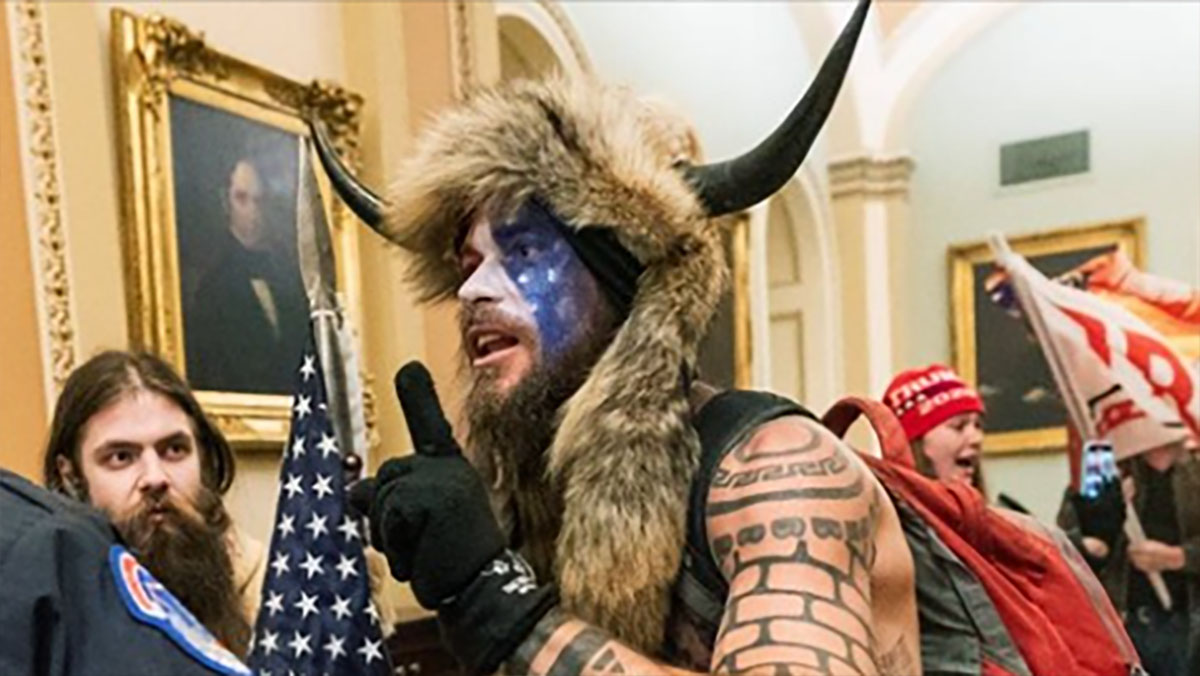 Wearing a horned headdress with a painted face, he dominated images on social media after hundreds of protesters broke into the Capitol building last week.

He was later identified at Arizona resident Jacob Anthony Chansley, a.k.a. Jake Angeli.

The 33-year-old was arrested on Saturday after handing himself into the FBI and was charged with knowingly entering or remaining in any restricted building or grounds without lawful authority, and with violent entry and disorderly conduct on Capitol grounds.

Chansley who also refers to himself as the ‘QAnon Shaman’, was “identified as the man seen in media coverage who entered the Capitol building dressed in horns, a bearskin headdress, red, white and blue face paint, shirtless, and tan pants,” according to a statement from the Department of Justice (DOJ).

“This individual carried a spear, approximately 6 feet in length, with an American flag tied just below the blade,” according to the statement.

During his first court appearance, he made no statement about the charges against him. He did address the judge saying he might be able to get a friend to hire a private attorney for him, according to ABC News.

His attorney, Gerald Williams, said Monday that Chansley hasn’t been able to eat since his arrest Saturday because of a restricted diet.

Magistrate Judge Deborah Fine advised Williams to collaborate with the U.S. Marshal’s office to resolve the problem, adding that Chansley “needs to eat.”

Outside the courthouse, his mother Martha Chansley told reporters that her son “gets very sick if he doesn’t eat organic food,” the Arizona Republic reported.

His mom added that she hasn’t spoken to her son and “needs to speak to him” telling reporters she had to go but appreciated prayers during this time, according to a video posted on the news site.

According to News4 Tucson Martha said her son wasn’t part of the violence adding: “My son is a great patriot, a veteran, a person who loves this country.”

Chansley hasn’t yet entered a plea on charges of entering a restricted building without lawful authority, violent entry and disorderly conduct.

Do you think Chansley should be given a special diet while in custody? Feel free to leave your views in our comments section and don’t forget to share this article.