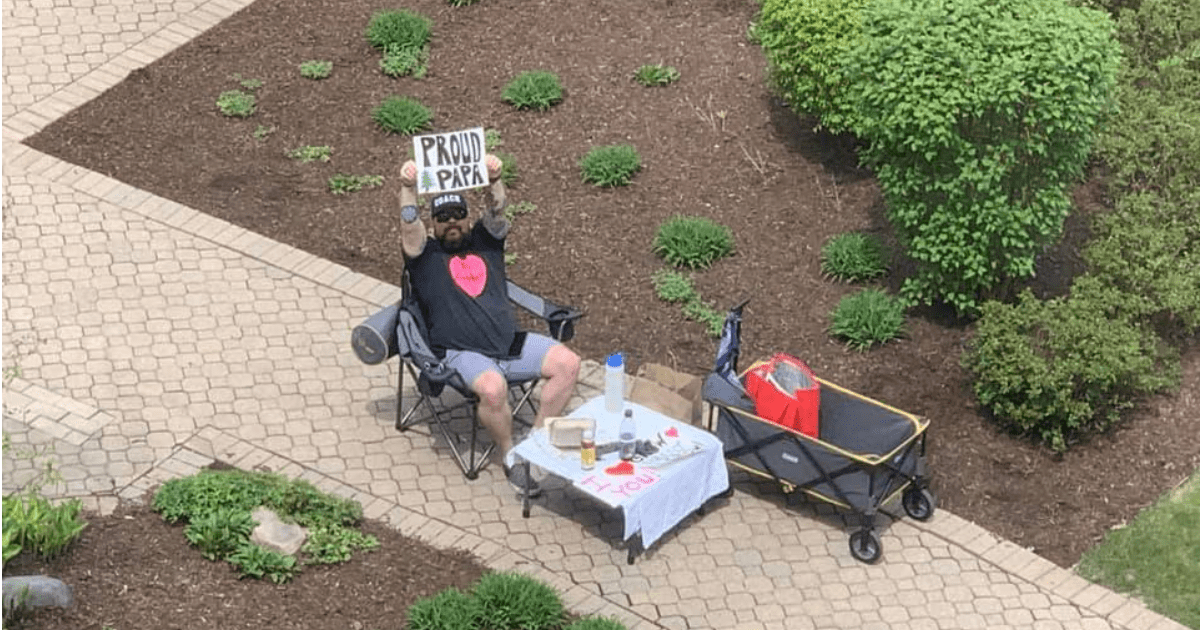 Nothing about the world’s current situation is normal, so when Bob Conlin’s wife, Shona Moeller had to go to the hospital for bed rest before the birth of the couple’s son, Conlin wanted to create some sense of normalcy.

“Shona and I have been married almost three years and date night is something we always did anyway. And it seemed like this would be a way to keep the tradition going and still connect and be with each other,” he told CBS News.

After Moeller had been at the hospital for some time, he surprised her with a “date night.”

Moeller thought it was just going to be a Zoom call, but instead he ordered food and had it sent to her room. He then set up a table outside her window so the two could enjoy their meal “together.”

“I wanted her to feel special and loved,” Conlin said. “She’s in there by herself and she can’t even leave her room.”

“In this time where I’m by myself, every gesture feels so monumental and lovely and sweet,” Moeller told Good Morning America. “It felt like he had traveled the world to come see me because it meant so much.”

Ever since Conlin has made sure to show up underneath Shona’s window to make sure she knows she’s not alone.

On March 23rd, while the couple was preparing their son’s nursery Shona’s water broke prematurely. She spent several weeks on bed rest at home, but on April 13, she was admitted to AMITA Health Adventist Medical Center in Hinsdale, Illinois.

Currently, the outlook is much better than several weeks ago when doctors told the couple there was only a 1 percent chance their son, who they plan to name Forest, would survive.

“Had you asked me at 20 weeks, I would have said there’s no chance to deliver a healthy baby boy,” Dr. Monique Brotman, Moeller’s doctor said. “Now at 28 weeks the mortality risk jumps down to probably 5 percent.”

Even though the hospital doesn’t currently allow visitors due to COVID-19, Conlin will be allowed in the delivery room for the birth of their first child.

Until then, Conlin will continue showing his support outside of the hospital.

“He’s just been a beacon of support,” Moeller said. “He has such a big heart.”

Best wishes to the couple. We can’t wait for you two to meet Forest!