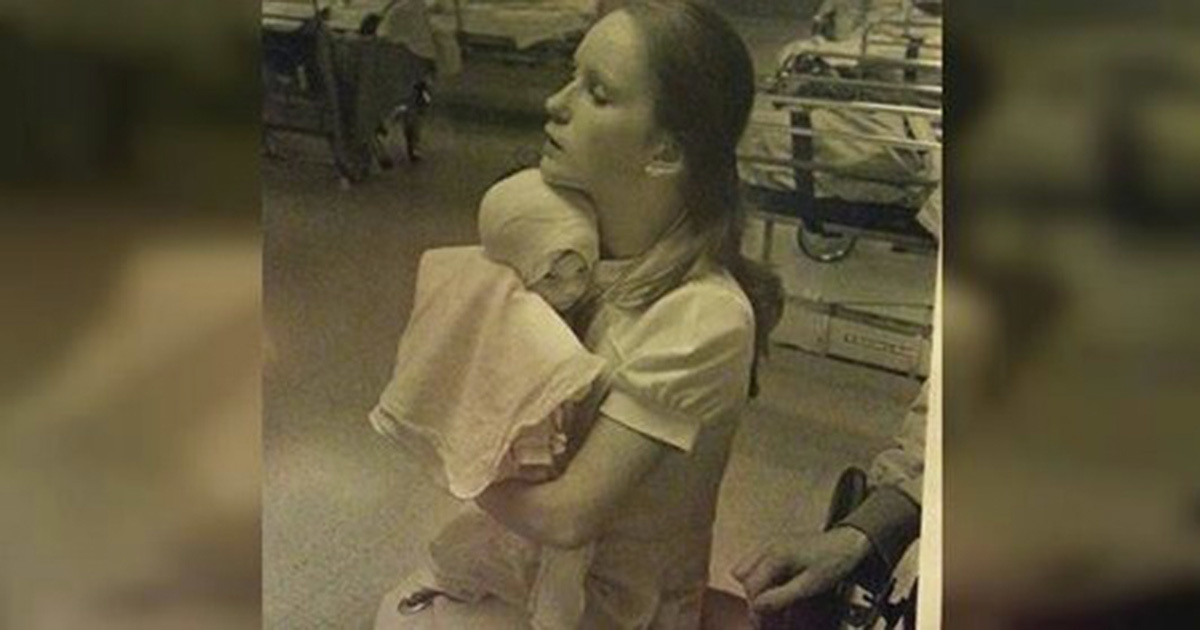 For decades, Amanda Scarpinati preciously held on to an old, faded out, black and white photo. It featured her, as a little baby, held by a young nurse. The photo was taken in 1977 when Amanda had to be taken to a hospital in the New York area after a serious accident. At just 3 months, she rolled off the sofa onto a scalding hot humidifier, suffering severe burns. The black and white photo reveals the little baby’s head wrapped in a thick gauze, and the nurse looking down lovingly at her. For the following years, Amanda underwent several surgeries, and was bullied by his classmates as she was disfigured. When in her darkest moments, she often picked up that photo and looked at it. It gave her comfort– proved that at some point in her life there was someone who really cared about her. Amanda searched for years for the nurse who’s loving expression in the photo inspired her to not give up. She tried everything for 20 years, and ultimately turned to social media. What happened next is so heartwarming — I was both fascinated and deeply touched by this simple, yet beautiful story.

It was in 1977 when Amanda Scarpinati, at just 3-months old, was rushed by ambulance to the Albany Medical Center in New York with third degree burns. She had rolled off a couch and landed on a hot humidifier.

At the hospital she was attended to by a young nurse. This black and white image shows the nurse holding Amanda in her arms and looking warmly down at her.

Amanda recovered well, but her childhood wasn’t easy: she’d been severely burned during the traumatic event and was disfigured.

“Growing up as a child, disfigured by the burns, I was bullied and picked on, tormented,” Scarpinati told the AP news agency. “I’d look at those pictures and talk to her, even though I didn’t know who she was. I took comfort looking at this woman who seemed so sincere, caring for me.”

Amanda was hoping that one day she would find the nurse who gave her warmth and comfort during those rough times. After 20 years of searching, with no luck, she eventually turned to social media. She shared the black and white picture on her Facebook page and wrote: “This was from 1977. I would love to know her name and possibly get a chance to talk to her and meet her. Please share as you never know who it could reach.”

Her post spread like wildfire and the very next day after she received the message she’d been longing for. A woman named Angela Leary, who worked as a nurse at the hospital that same year, recognized in the photo a former colleague: Susan Berger.

Berger was 21 at the time and had just finished college. The young nurse had also saved the picture and never forgot the tiny girl who’d fought so bravely against such severe burns.

“I remember her,” Berger said before they met face to face. “She was very peaceful. Usually when babies come out of surgery, they’re sleeping or crying. She was just so calm and trusting. It was amazing.”

Shortly afterward, the two had an emotional reunion, 38 years after their first encounter.

“I don’t know how many nurses would be lucky enough to have something like this happen, to have someone remember you all that time,” Berger said. “I feel privileged to be the one to represent all the nurses who cared for her over the years.”

I was deeply moved by this beautiful story, especially considering everything that Amanda went through. Spread this ‘love story’ if you agree that nurses, despite the difficult conditions of the work that they do, are doing a fantastic job for everyone struggling and having a tough time in life. You are wonderful!