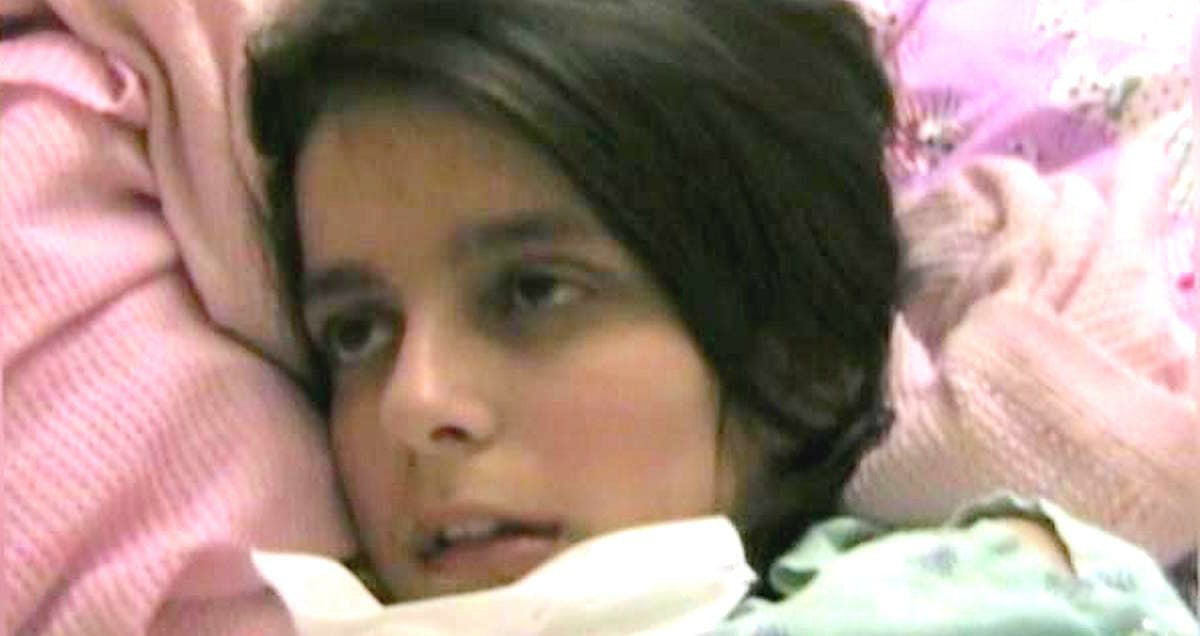 Victoria Arlen was born a triplet, along with her two brothers.

As a little girl, she loved to dance and was extremely talented at sports. All in all, she was a hopeful, energetic youngster.

However, when she was just 11, Victoria experienced worrying flu-like symptoms. She fainted several times and contracted pneumonia.

Two weeks later, she was paralysed from the waist down.

Her body shut off, bit by bit. A severe inflammation of the brain and spinal cord destroyed her whole life.

Her family could only stand and watch as Victoria completely lost the ability to talk, eat or move freely.

But her incredible story was far from over. What happened four years later would shock her family and physicians alike.

In 2006, when Victoria was 11, she gradually slipped into a coma having initially exhibited flu-like symptoms.

She had no control of her arms, couldn’t swallow properly and couldn’t find the right words when she wanted to talk.

It was as if someone had slowly flicked the off-switch on the circuit board that controlled her brain. She was ebbing away.

Then, everything went dark.

Victoria spent almost four years ‘locked’ inside her own body.

The doctors explained to her family that she was in a vegetative state. She was fed through a tube to keep her alive.

Her parents were told early on that it was highly unlikely she would recover.

“We lost her,” her mother, Jacqueline said.

What nobody knew was that Victoria could hear her loved ones beside her hospital bed.

Two years after slipping into the coma, she ‘woke up’ again mentally, but could not move her body. She could hear conversations around her and wanted to react, but her body would not obey her commands.

Victoria had no way of telling people what was happening to her.

By this time, doctors had discovered the unusual disease that caused the inflammation in Victoria’s spinal cord and brain.

She heard doctors tell her family that she was effectively brain-dead. She would remain in a vegetative state for the rest of her life.

“But my parents believed in me. They set up a hospital room in our house in New Hampshire, and took care of me. My three brothers — I’m a triplet and we have an older brother — talked to me and kept me in the know about what was going on outside of my room. They empowered me to fight and get stronger. They didn’t know I could hear them, but I could,” Victoria says, as per ESPN.

In 2010, Victoria was completely out of her vegetative state.

In started in December 2009, when she was able to make eye contact with her mother. From there she gradually began to come back to life. She was able to move a finger, then over time progressed to waving her hand. Eventually, she was able to form words, and the words then became sentences.

She started eating pudding by herself, then migrated onto her first steak in four years. Victoria became able to hold her first mobile phone, and learned what it meant to ‘poke’ someone on Facebook.

But in spite of the incredible improvements there remained one thing she couldn’t do: move her legs.

Victoria was told that the swelling to her brain and spinal cord had caused permanent damage. She would be paralysed from her waist down forever.

Each specialist told her the same: “You have to get used to sitting in a wheelchair.”

Bullied for her wheelchair

But Victoria boasts willpower like few others. She fought to overcome the impossible odds.

When doctors told her she would never walk, she refused to believe them. She knew that she wasn’t destined to spend her entire life in a chair.

Despite her winning attitude, though, it was difficult for Victoria to make any progress on that front. When she returned to high school in a wheelchair, she was bullied for it by some.

She had looked forward to going back to school, but after her first day there she never wanted to return.

Victoria came home, totally crushed, on the brink of tears. That day, her parents promised they would do anything to help their daughter recover the confidence to go again.

They held that promise, and never lost hope.

And hope was all Victoria had – reason spoke against her being able to walk again.

One particular quote characterized her struggle through this time: “Optimism is the faith that leads to achievement. Nothing can be done without hope and confidence.”

Having grown up near a lake and learned to swim at an early age, Victoria was no stranger to water. She had joined a swim team and taken part in competitions when she was just 10.

While recovering from her disease, Victoria believed she would never be able to swim again. She thought it impossible without the use of her legs.

But her brothers thought differently. In 2010, they threw her into the family pool. She was terrified at first, but this was the push she needed.

She says she got back the “jump” in her life. When swimming, Victoria was free from the chair, and to her own surprise she remained a strong swimmer.

What’s more, the water gave not only freedom, but confidence.

In the summer of 2012, at 17, Victoria was part of the US team that competed in the Paralympic Olympic Games. She took home three silver medals and one gold in the 100 meter freestyle. She also set a new world record in the latter event.

When she returned home from London, much of the world knew who she was. Victoria was invited to speak as a lecturer, and people began to recognise her in the grocery store.

She began to tell her story to television reporters and magazines; she became an inspiration for millions around the world.

There was, however, one thing that still bothered her: That wheelchair.

In 2013, Victoria moved to San Diego to participate in the Project Walk program, which helps paralysed people to stand on their own two legs again.

“My mother and I temporarily relocated to San Diego and lived with family so I could train every day. We realized this was the place that could help me, but we didn’t want to live hundreds of miles away from my brothers and dad. So, keeping their promise, my family decided to open the first Project Walk franchise on the East Coast. This way, I could train every day and achieve my goal, while others in my hometown could regain the hope they needed,” Victoria says.

Specialists at the hospital were still sceptical over Victoria’s capacity to walk.

A doctor told her parents he wouldn’t “mortgage his house on it”. They responded by doing exactly that, so that they could afford to open a Project Walk Boston.

She was held in a harness above a treadmill, with two coaches helping her to move her legs.

By then, it had been six years since she had ‘woken up’. He legs had been declared dead by multiple doctors, again and again.

Still, Victoria got up every single day and trained six hours to reach her goal.

Slowly, she began to regain movement in her legs. She started to be able to walk with the assistance of crutches.

Five months later, on March 3, 2016, she got rid of the crutches completely and put one foot in front of the other independently. She hasn’t stopped since then.

“That’s not to say every day is perfect. Walking is still challenging and I still have significant impairment. I wear leg braces, follow a training program for two-to-three hours per day and on the days when my legs feel more paralyzed, I have my chair or crutches on standby. But my struggle is now less visible,” she explains.

Only her coach and her close family know the true extent of the damage, and the effort it takes for her to continue progressing each day.

“But it’s all worth it. It’s been 10 years since I was able to look someone in the eye instead of staring at everyone’s butts all day.” When Victoria first stood up from her wheelchair, she didn’t know what to think.

She was unsure how people would react to her.

“But then I realized this is my journey and nobody else’s and maybe it can give hope to people who need it most.”

Today, Victoria has found her new identity after a turbulent 10-year journey.

She is a Paralympic gold medalist, a program leader for the ESPN sports channel and, most of all, a survivor.

Victoria is often seen as a walking, talking miracle, and an inspiration for all. She, however, is careful to point out one thing:

“I didn’t do this on my own, and I am grateful for everyone who has helped me to this point. Each day, I become more comfortable with my new reality. I thought taking those steps on March 3 would be my finish line. But really, they were only the beginning.”

What an incredible journey this strong, brave and inspiring woman has embarked on!

The least we can do is share her story so that all of our friends and family are also given the chance to be inspired by her battle!

“Optimism is the faith that leads to achievement. Nothing can be done without hope and confidence.”

We wish you the best of luck in the future, Victoria.