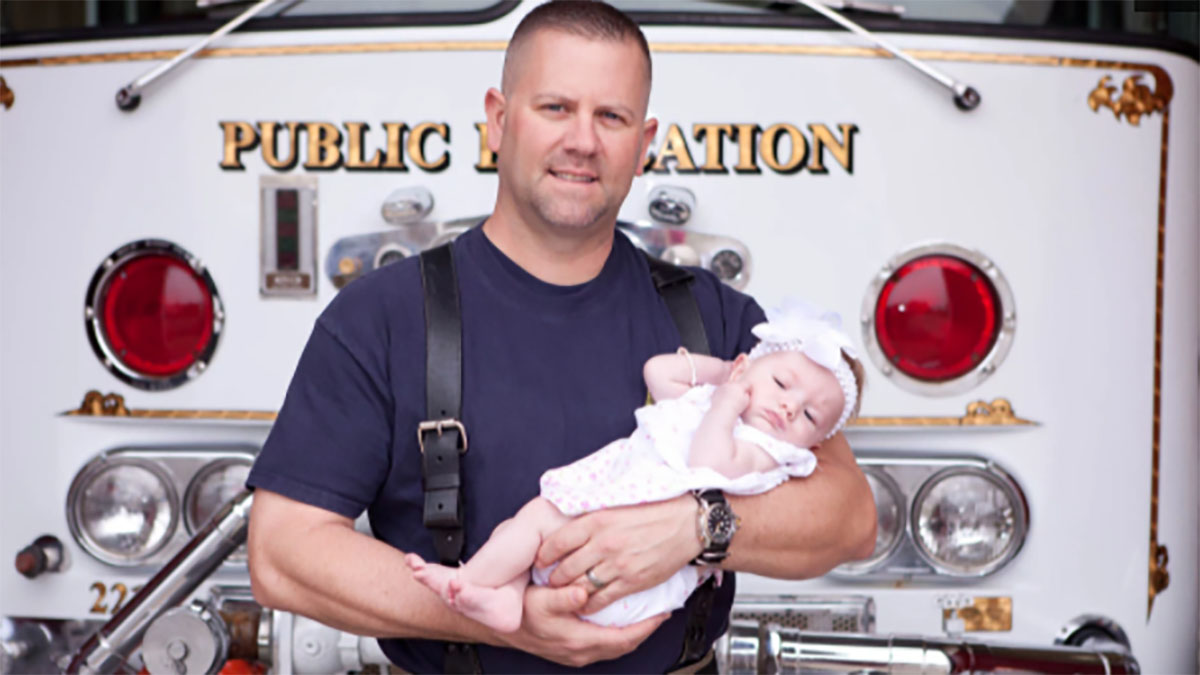 When firefighter Marc Hadden was called out to a woman in trouble he had no idea the path he was about to be set on.

The experienced firefighter had been on many call outs but this 911 call out was a first for him after a woman called for help complaining with abdominal pain.

The dad of two from Myrtle Beach, South Carolina, found himself delivering a baby for the first time.

“You can talk about how cool it would be to deliver a baby, until it actually happens,” Marc told Inside Edition.

Marc and his wife Beth, a teacher, had two sons and wanted to add a daughter to the mix until doctors gave them the news that put a stop to their family plans.

“My wife was basically told to wrap it up, that any further pregnancies could cause complications for her and the potential baby,” he told Inside Edition.

They had considered adoption but the cost was too high.

Little did he know that a routine call out to help deliver a baby would turn out to be the best day of their lives.

Marc arrived at the scene on November 14, 2011 and soon realized the woman’s stomach pains were in fact contractions but there wasn’t enough time to get her to the hospital.

The firefighter helped deliver the baby girl and the mom named her Gracie. He recalls the special moment and how involved he was in the baby’s first moments.

“I was tasked with everything to do with Gracie… I helped her take her first breath,” he added.

When Marc called his wife and told her he’d just delivered a baby girl Beth joked: “Can we keep her?”

Little did they know that just 48 hours later their dream would become a reality.

The couple soon learned that the mom was a single mom already struggling to raise a teenage son. Beth felt for the woman and went to visit her the next day in hospital.

“My heart just went out to this woman,” said Beth, 39, who works as an instructional coach at the local elementary school.

“I brought her a little prayer book and asked if I could get anything for her,” she told People.

As the two women sat and got to know each other a doctor came in and told the baby’s mother they were ready to move forward with the adoption. The women seemed distraught at the idea that a stranger would be taking her daughter at which point Beth spoke up.

“Suddenly the opportunity was there for me to say that Marc and I had been praying about adoption for years,” she told People. “And she looked over at me and said, ‘I want you to adopt my baby.’

“She had the nurse bring her in and I was able to hold Gracie for the first time. I called Marc and said, ‘I think we just had a baby.’”

Just hours after Marc had helped the woman safely deliver her baby girl he and his wife had signed temporary custody papers and were bringing her home. They called her Rebecca Grace but her nickname is Gracie.

They described the moment as like “winning the lottery,” but they weren’t prepared for a baby girl so soon. Thankfully the community came forward and helped with the mountain of supplies and clothing needed for a newborn.

Marc said he couldn’t open his door because of the baby supplies that friends, family and coworkers dropped off at their door.

Five years later and there is no doubt the Hadden’s life has changed.

“I love my boys more than life itself but Gracie has me wrapped around her fingers. There’s no doubt about it.”

“We have this bond that I think supersedes even other father daughter relationships. We’re as thick as thieves.”

It was fate that called Marc to deliver Gracie that day; such a beautiful story and I’m so happy Gracie ended up becoming part of this beautiful family.

Please pass on the joy and share this story with everyone you know.