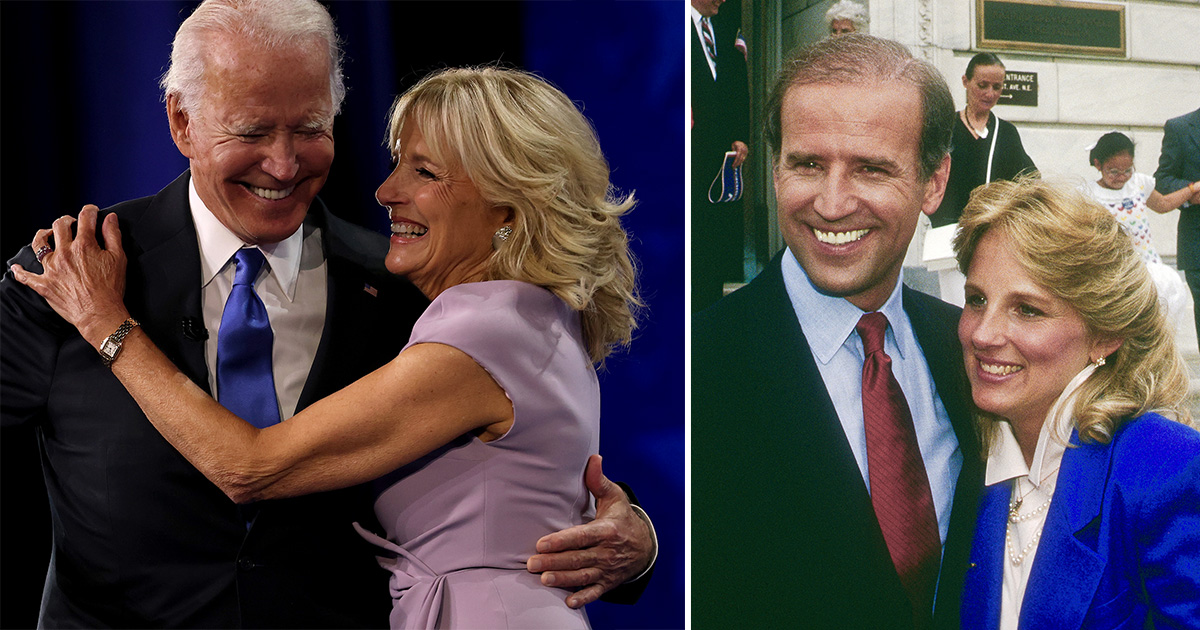 Joe Biden was this week sworn in as the 46th President of the United States. By his side, he will have Vice President Kamala Harris, as well as an untold number of White House staffers to help him in his every day life.

But most importantly, Joe Biden will have his wife, First Lady Jill Biden. They’ve been married for 39 years, and through their life together they’ve cherished amazing moments, as well as enduring several tragedies.

So how did they meet? And why did Jill Biden decline Joe’s proposal four times? This is the love story of Joe and Jill Biden.

We’ll start with Jill Biden. Who is she?

Jill was born Jill Tracy Jacobs in New Jersey in 1951. Most of her childhood was spent in the suburbs of Philadelphia, and as the oldest of five siblings, she was a real prankster. Funnily enough, she seems to have carried that with her to this day.

During a rally in 2008, Jill put a plastic rat on the podium where Joe was about to speak, and later that night, she put the same rat on Joe’s pillow.

Jill Biden went to Brandywine Junior College, where she studied fashion merchandising. Following one season at the college, she transferred to the University of Delaware to major in English. ver since, she’s dedicated her life to working as a teacher in both public high schools and community colleges. She also had a stint teaching history to teenagers at a psychiatric hospital.

Jill Biden earned two master’s degrees in reading and English. In 2007, she earned a doctorate in educational leadership.

Around the same time as earning her masters degree, she also attained something else in the form of the love of her life, Joe Biden, though it wasn’t her first marriage. In 1970, she married Bill Stevenson, but the couple separated in 1974. The following year, she met newly-made U.S Senator Joe.

In 1972, tragedy struck the family when Biden’s wife and daughter Naomi passed away following a car accident where a tractor-trailer slammed into their station wagon. During the Yale Commencement in 2015, Biden spoke about the heartbreaking incident.

“Six weeks after my election [as a U.S Senator of Delaware], my whole world was altered forever,” he said. “While I was in Washington hiring staff, I got a phone call. My wife and three children were Christmas shopping, a tractor-trailer broadsided them and killed my wife and killed my daughter. And they weren’t sure that my [two] sons would live.”

Joe Biden was sworn in as a U.S Senator in the hospital where his young boys were being treated following the accident.

“The incredible bond I have with my children is the gift I’m not sure I would have had, had I not been through what I went through … But by focusing on my sons, I found my redemption.”

Biden’s sons pulled through, and three years later, he’d meet Jill Biden for the first time. Joe Biden’s brother had set him up on a date with her.

At first sight, Jill wasn’t really sure it was going to work at all.

“I was a senior, and I had been dating guys in jeans and clogs and T-shirts, he came to the door and he had a sport coat and loafers, and I thought, ‘God, this is never going to work, not in a million years,'” Jill Biden told Vouge. “He was nine years older than I am! But we went out to see A Man and a Woman at the movie theater in Philadelphia, and we really hit it off. When we came home, he shook my hand good night. I went upstairs and called my mother at 1:00 a.m. and said: ‘Mom, I finally met a gentleman.'”

The two grew fond of each other, though at first, Joe and Jill pretty much maintained an illusion that their relationship was just for “fun”.

“She was just starting her own career,” Joe Biden wrote in his 2007 memoir Promises to Keep. “I think it was easier for her in the beginning of our courtship when I wasn’t thinking about marriage. We both just liked having fun with somebody again, and she wanted to keep it that way.”

However, things started to get serious before long. Joe and Jill fell in love, and the now-U.S President wanted to take the next step.

In his memoir, Biden explains that he didn’t introduce Jill to his two boys, Beau and Hunter, right away. But once they all met, they “hit it off” and Jill started to be a part of the family during major holidays, including Thanksgiving and Christmas.

Joe Biden was in love again. But it was actually his boys that suggested marriage for the first time. It was an ordinary morning when the boys were aged 7 and 6 respectively, and Joe was in the middle of shaving. He recalled the wonderful moment in his book, a passage featured in The Washington Post.

“Finally, Hunter spoke up: “Beau thinks we should get married.”
“What do you mean, guys? Beau?” Joe replied.
“Well,” Beau said, “we think we should marry Jill. What do you think, Dad?“
“I think that’s a pretty good idea,” I told them. I’ll never forget how good I felt at that moment.

Taking the leap into marriage is a big thing. Joe Biden wanted to do it, but the first proposal didn’t go quite the way he wanted it to, neither did the proposals following.

Jill says that it had nothing to do with her not wanting to get married. She merely had his children, Beau and Hunter in mind.

“I said, ‘Not yet. Not yet. Not yet.’ Because by that time, of course, I had fallen in love with the boys, and I really felt that this marriage had to work,” she told Vogue. “Because they had lost their mom, and I couldn’t have them lose another mother. So I had to be 100 percent sure.”

Joe says it came to the point where he gave her an ultimatum.

“‘Look, this is the last time I’m asking you,'” Joe recalled himself saying. “‘I don’t care when we get married. But I want a commitment.’ And she said okay. But it took that!”

On the fifth proposal, Jill Biden said yes. On June 17, 1977, the two got married in New York City at the United Nations chapel. The ceremony was intimate, with only 40 of their family members and closest friends in attendance. By Joe and Jill’s side at the alter stood sons Beau and Hunter, and the reception was held at the Sign of the Dove restaurant.

Both Joe and Jill had been through a lot at that point. For that reason, their union wasn’t just simply about getting married.

Rather, it was about Jill becoming a part of a larger family. For Beau and Hunter, this was especially important.

“The way they thought of it, the four of us were getting married,” the President wrote.

It truly is a wonderful thing, marriage, and the way that Biden’s sons saw it really makes me tear up. It’s a simple, but oh-so beautiful gesture!

Joe and Jill Biden, alongside Beau and Hunter, went on to embark on their honeymoon. And in 1981, the family welcomed a new addition in daughter Ashley.

Jill decided to take some time off teaching to focus on raising both their newborn daughter, and her stepsons. However, she was soon back in school teaching, which is truly her biggest passion in life.

As much as their love story is wonderful, Jill actually had a tough time in the beginning.

She arrived into a family that was used to always touching each other and being affectionate. It was something new for her that took some time to get used to.

“When we started to date, Joe and his family were very touching and loving—always touching the boys and running their hands through their hair—and it took me a minute to kind of get used to that,” Jill Biden explained.

Working as the First Lady

“And Joe said, ‘I just grew up differently; that’s all.’ My mother and father didn’t touch us constantly. I’m more affectionate now. I just sort of … slid into his way of being.”

Joe and Jill Biden have been through plenty, and even though her husband became the US Vice President in 2008, she continued grading papers at Northern Virginia Community College, as well as going to White House receptions. According to Politico, her Secret Service agents even dressed like college students carrying backpacks while she was working.

Jill Biden was able to effectively hold down two jobs, and one individual who was impressed with her work ethic was former First Lady Michelle Obama.

Jill has never been a person who craves attention or limelight.

Mary Doody, a former assistant dean at Delaware Technical Community College, recalled in an interview with CNBC that she always kept her identity low-key, even when husband Joe served as a Delaware Senator.

“At Delaware Tech, they simply did not know that she was Senator Biden’s wife,” Doody said. “She kept it under wraps. And when she got her doctorate she got it under ‘Jacobs’; she didn’t use Biden, because she has just always wanted to be her own person and for the students to know her as a teacher and not as the wife of a senator. She doesn’t need that affirmation. It’s just who she is.”

So what happens now, with Joe Biden having been sworn in as the 46th President of the United States? Well, Jill will continue teaching both English and writing at the college where she works. By doing so, she will become the first First Lady to still hold a professional career.

Advisers initially thought her crazy for doing so, but Jill and Joe were clear. The most important thing is for them to be happy and satisfied while they’re undertaking two of the most demanding jobs there are.

“I just wanted to do the thing I love best,” she wrote in her 2019 memoir, Where the Light Enters.

Her husband’s response? “Of course you should.”

Jill Biden and Joe Biden’s story really is something special. We wish them both all the best in the future!

Please, share this story with friends and family if you were touched by their enduring love story.