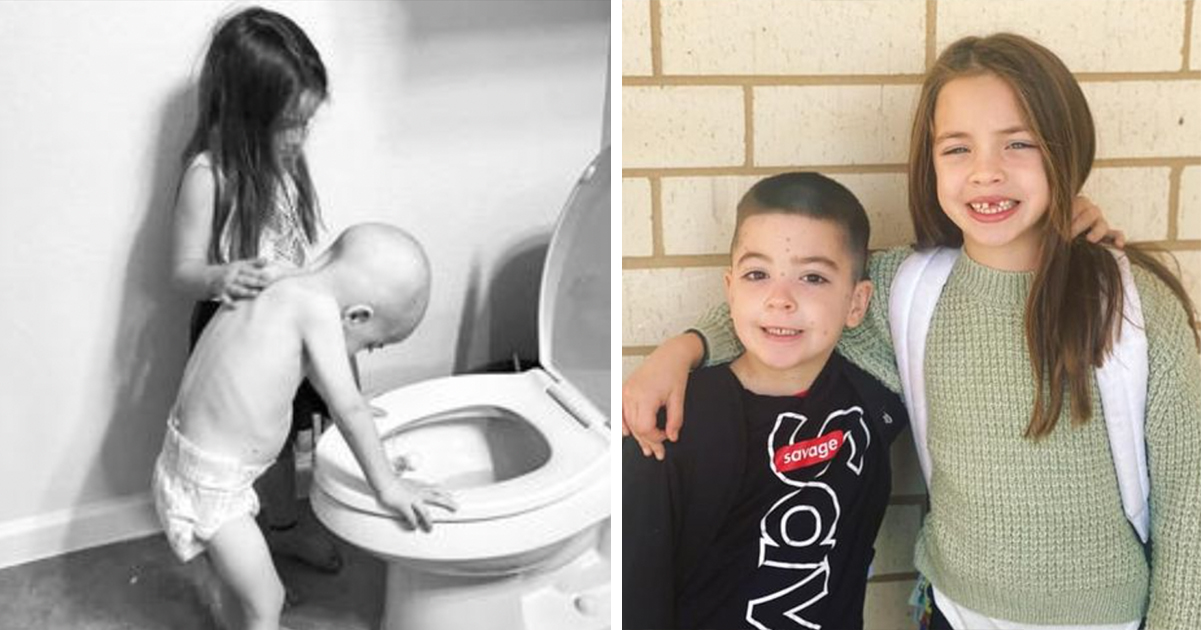 Cancer, sadly, is something a great many of us will have to contend with at some point in our lives.

Though we might not ourselves be affected by the terrible disease, the chances are high that someone we love – or, at least, someone we’re close to – will be.

Here at Newsner, we’ve covered all manner of cancer-related stories, some sad, some inspiring, some triumphant. The story of 2-year-old Beckett, however, was one that moved us more than any other.

You may remember the little boy in the harrowing picture above.

Beckett’s mother, Kaitlin Burge, posted an imagie to her social media in 2019 wherein her son, Beckett, then two, was seen while being comforted by his elder sister during chemotherapy treatment.

According to reports, Beckett was diagnosed with acute lymphoblastic leukemia on April 25, 2018 and began treatment immediately.

His then-four-year-old sister, Aubrey, had to watch as her baby brother struggled to summon the strength to even walk, let alone play.

According to Bright Side, Kaitlin told how Beckett spent 35 days in hospital being treated for cancer, during which time Aubrey wasn’t able to see him. She knew he was very sick, and that doctors were helping him, but it was all a bit much for her to wrap her head around.

“I watched my only son go through so much and still smile. I watched my sweet Aubrey push through a difficult time in her life and become so independent,” Kaitlin explained.

“She saw her best friend/brother in a state no sibling should ever have to experience.”

After two years of determined struggle and fight, Beckett has beaten his cancer and is currently attending school.

Kaitlin said: “He is feeling great, he is done with treatment, and is back to school, currently in the first grade.”

The now-six-year-old Beckett and his inspirational elder sister have a bond forged by a truly unimaginable battle, and we’re sure she’s delighted that he has a clean bill of health!

It’s inspiring stories like Beckett’s that can really put everyday struggles into perspective for the rest of us.

Though it can be difficult to keep in mind, it always helps to remember that tough times are, like good times, temporary – there is an end, even if you can’t see it, and most often better things are waiting just around the corner.

We can’t express enough how happy we are that Beckett was able to come through his battle with cancer and emerge healthy on the other side. Cancer truly is a horrible illness; the sooner we rid our world of it altogether, the better!

We’re sure you agree that cancer has no place in this world, let alone where innocent children are concerned.

Please, share this article on Facebook if you want to wish Beckett and his family well. Meanwhile, leave a comment in the box if you want to send thoughts and prayers to all those suffering with this terrible sickness.