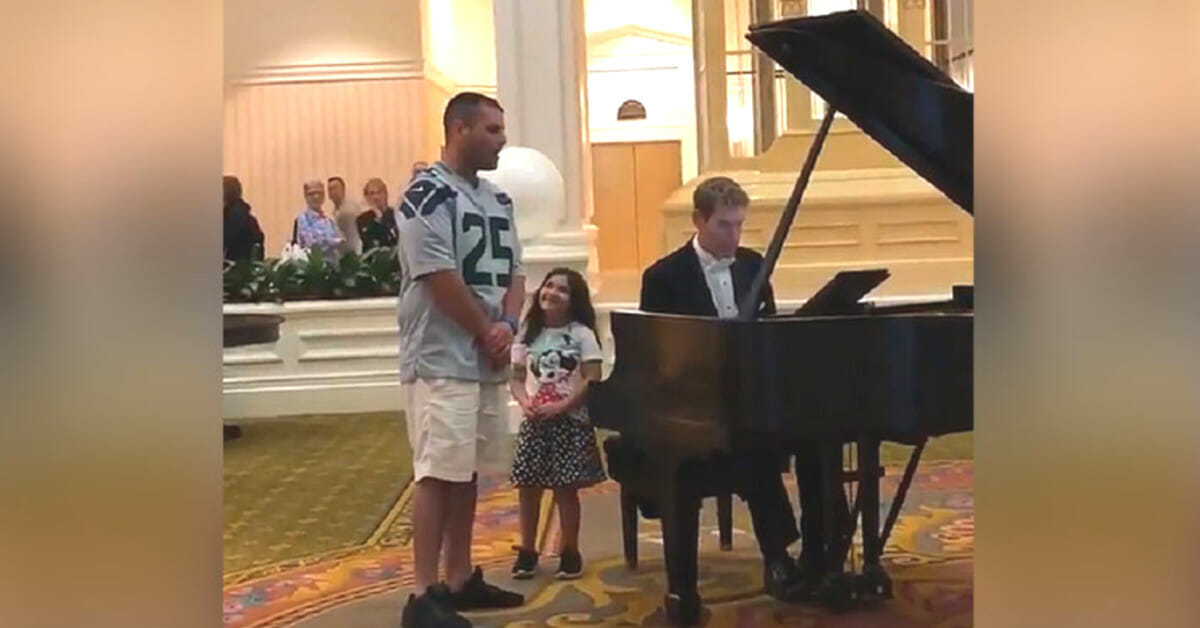 As we get older, most of us become immune to the charm of amusement parks. Sure, we’ll still get excited by going on rides, and a tiny part of us remembers that magic we used to feel when we were younger, but for the most part amusement parks are the domain of children.

It’s why parks concentrate on little ones as their target audience: they know that if they can hook the kids, the adults have no choice but to follow.

That was exactly the case for one dad, who ended up becoming a viral sensation after a truly unexpected encounter. Of course, it was his daughter who was to blame/credit, after encouraging him to lend his voice in a truly special way …

We all know and love Disney World. There’s a reason it’s become one of the most popular theme parks in the world, and on any given day you can witness thousands of children experiencing their wildest fantasies coming true.

Justin Gigliello and his family were enjoying a day at the park when they passed by a pianist at the Grand Floridian after lunch.

Justin was with his six-year-old daughter, Lyla, and it was her who was struck by a sudden idea. She said her daddy knew how to play the piano too.

Justin shyly waved off the suggestion, saying he was more into singing (he works as a vocal coach and music teacher). He was happy to continue walking, but Lyla had other ideas. She managed to convince the pianist to play, and encouraged her dad to create a duet with him.

It wasn’t long before Justin found himself belting out “Ava Maria”.

What followed was a scene worthy of viral fame, and all the more impressive considering Justin isn’t some recognized star. On the contrary, he’s a part-time firefighter when he’s not teaching music! Some people stopped to watch his impromptu performance, others pulled out their phones and began to film.

Lyla told the local press: “He sang it out loud and almost everyone took a video of him.”

At the end of the song, Justin received a hearty round of applause. His wife’s video was uploaded to Facebook, where it garnered thousands of likes, comments and shares.

“It’s beyond what I ever could have dreamed,” Justin said.

Watch the magic in the video below:

We’re so happy Justin was encouraged to channel his inner-talent and perform the way he did. And it’s all thanks to the lofty ambition of his daughter! If only more of us were brave enough to put ourselves out there and show off our ability.