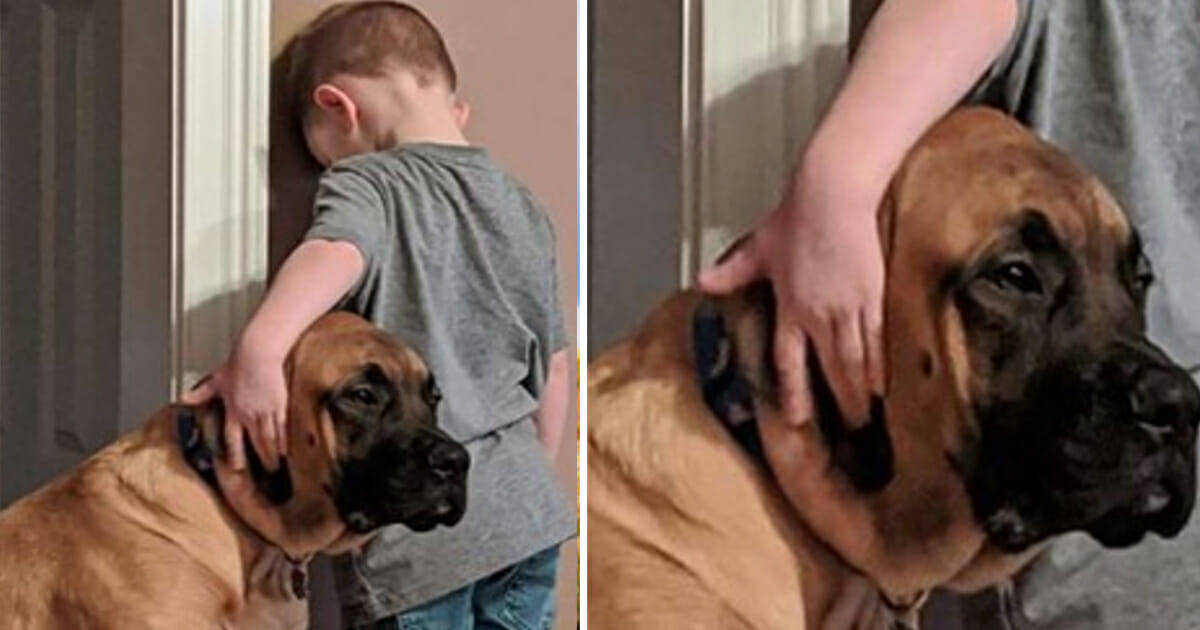 It’s long been said that dogs are a man’s best friend. Anyone who’s ever owned a dog can probably testify to the theory; they truly are the best companions one could ask for.

If however, for whatever reason, you’re still in doubt, check out the delightful friendship showcased by three-year-old Peyton and his four-legged friend.

The toddler had reportedly been sent to serve a ‘time-out’ by his mom, Jillian Marie Smith, having landed himself in trouble for fighting with his three-year-old sister.

Rather than go to his room, Peyton took the option of a time-out as punishment, meaning he had go to a certain spot and place his head against the wall.

Assuredly going against Jillian’s intentions, however, that’s when Dash, the family’s English mastiff, decided to show the boy some solidarity. The dog walked over to the wall and joined Peyton!

Jillian, though no doubt keen to drive home a lesson, couldn’t help but react with a smile. She took her camera out to capture the heart-warming moment.

Posting the adorable picture on Facebook, the mum wrote: “When you’re in time-out but your best pal won’t let you serve your time alone.”

Needless to say, the photo proved a hit online. Jillian’s post thus far has over 40,000 shares on Facebook.

“I couldn’t be mad long because it was just so cute how Peyton wrapped his arm around Dash,” she confessed to The Dodo. “When Peyton had to go to time-out, I think Dash knew he needed his buddy.”

When Peyton’s time-out was done, he and Dash went back to being their usual toddler-doggy duo in freedom. It certainly looks like Peyton has made a friend for life.

I simply can’t get enough of dogs and the love they consistently show. The picture of Peyton and Dash brought a warm smile to my face.

Share this article to brighten someone else’s day today!