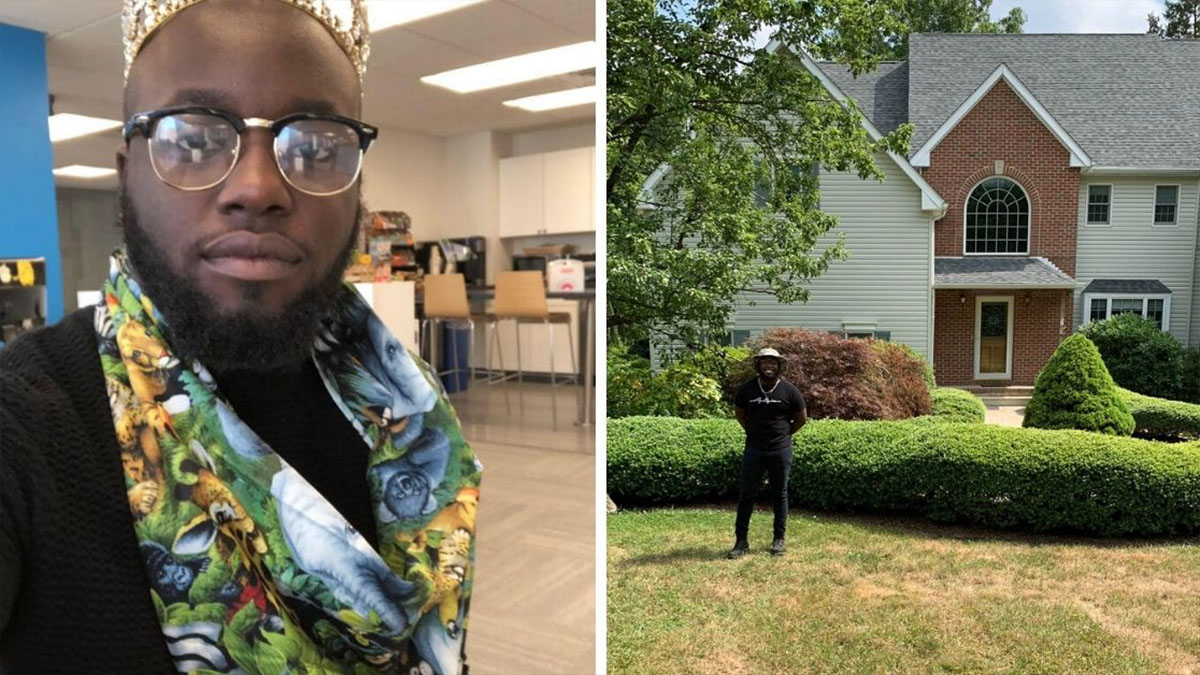 Buying your first home is an achievement for so many and worth celebrating, but for some it’s an accomplishment beyond their wildest dreams.

Chris Atoki is just 24 years old and has taken his first step on the property ladder because just four years ago he was homeless.

At 18 years old the Philadelphia resident found himself homeless with less than a dollar to his name.

The then teenager had endured a grueling daily routine that meant waking up at 7am every day and going to class until 3 pm, then catching a couple of hours of sleep before working a 12-hour shift at a warehouse from 5 pm.

He needed the job to pay his mother’s rent. He managed to keep up with everything until his manager announced he was going to be cutting shifts, and Chris’ was one of them.

He still thought he could manage and was even looking forward to the extra sleep he would get, but two weeks later his employer let him go – because he wasn’t working enough hours.

“Here I am 18 years old. Only job I had was filling trucks and I’m still going to school because that’s what I was taught you have to do to make it,” Chris said. “The problem is with no income and no parental help I lost even more.”

Without a job he had to drop out of school and after an argument with his mom he found himself kicked out and on the streets. He tried to stay with his grandma but that didn’t work out, then turned to his girlfriend for a place to stay but her dad objected.

“So I had to stay in my car,” he wrote on Thread. ” I remember the day. I parked in front of Walmart. Freezing cold. Less than a dollar in my account. I think it was like $0.83 or something. No family. No friends. No money. Hungry. Felt like giving up. Cried. Tried to sleep.”

“I really don’t know how to explain it but I told myself that I would fight for myself as long as I live. Maybe someone can explain it better but either way I felt like I was born again. Like a different person. I was going to grab life by the horns,” he wrote.

So he went to the library and applied for every job he saw until he was offered a job at a mattress company.

Despite a new job, he still found himself sleeping in his car and using a gym shower every day, so decided he needed to go back to school and gain the qualifications necessary to move up the ladder.

After talking to the CEO of the company he was able to keep his job and attend online classes while he was at work.

“It wasn’t much, but if we didn’t talk I guarantee I wouldn’t be where I am now today. So I didn’t have internet at my apartment or work so I used my hotspot on my phone to attend the classes while I was working. It sucked but once again I’m doing this for me.”

Chris graduated college and started work as a teaching assistant hoping to inspire other youngsters to follow their dreams no matter what obstacles were in their way.

Today he has a well-paid job in the technology industry, a son, and a home he can call his own.

“My goal is to show people that no matter the circumstances you can overcome it. I’m a 24-year-old black man with tattoos and was homeless just 4 years ago. To now owning a $350k home on 1.24 acres. If I can do it. You definitely can. I’m proud of myself.”

Chris’ story is an inspiration to anyone who feels like life has dealt them a rough hand. I’m so glad Chris has now got the security he deserves.