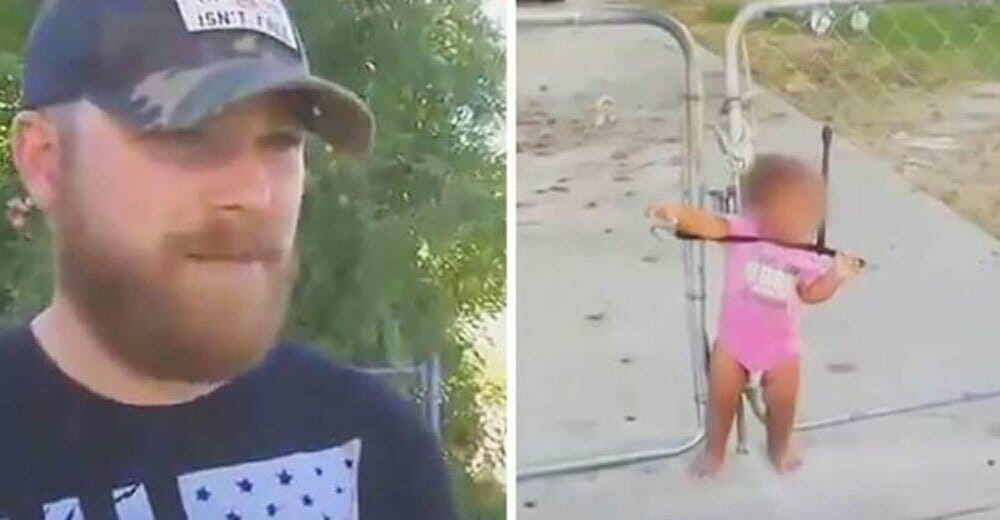 No matter the circumstances, no matter your situation, you never subject a child to any form of abuse.

It’s a simple enough rule – one that 99% of us are perfectly capable of adhering to – and yet there remain those whose grasp on the fundamental laws of nature is somewhat loose.

When Matt Knight was mowing his lawn one day in Spokane, Washington, he heard cries coming from a nearby house. On closer inspection he spotted something so appallingly disgraceful that we can only hope those responsible have since been brought to justice…

Spokane, Washington. Matt Knight was mowing his lawn when a noise caught his attention. To Knight it sounded like an infant crying, so, as most adults would, he decided to investigate the source of the noise.

What he found was a toddler tied to a fence, her arms tightly secured by bungee cords so that she couldn’t move.

Alarmed, Knight went to her rescue, whilst taking photos to serve as evidence for the police.

According to Knight, the toddler’s mother only came out of the house after he had stood for a time, shouting to get their attention. When he quizzed her as to what was going on, she merely led the young girl back into the house.

Reports state that residents of the neighborhood had lodged several complaints regarding similar incidents occurring on the property.

Watch the video below to see Knight’s shocking video:

How the girl’s parents were able to get away with this is beyond me. What vile human being does this to a small child?