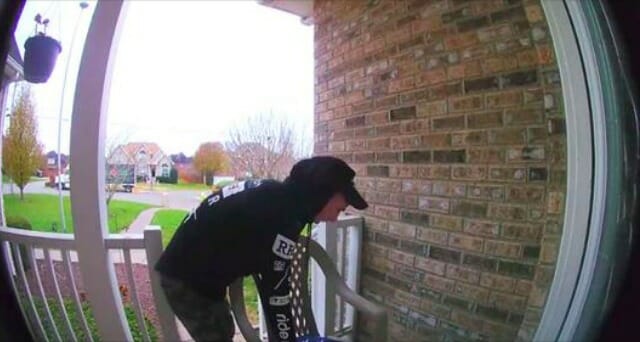 Crimes tend to go up during the dark, winter season and it isn’t unwise to be on higher alert at this time of year.

When Erin Fezell looked out her front door one day, she became suspicious — even though it was broad daylight.

She curiously watched through her surveillance camera as a stranger approached her porch — a man in a black hooded sweatshirt. At first, she was a bit concerned — what did the man want?

But the stranger’s intentions would soon become clear — and wonderfully so.

The young man walked up Erin’s front porch steps, holding something in his hands. At first, Erin couldn’t quite make out what it was — all she could see was what looked like a triangular cloth with white stars on it.

What would he do with it?

Erin curiously watched on. What the camera then caught made her heart melt.

He reached over to a white plastic chair on her porch — and laid the mysterious object on it.

He then simply left — and Erin rushed out to see what it was.

Strong winds had been blowing in her area, and it turned out that her American flag had blown off her pole, writes Fox 17 News.

The young man showed great respect for the flag by folding it up nicely and placing it on the chair — instead of allowing it to lay on the dirty ground.

Erin later recounted the events on Facebook. The mysterious stranger turned out to be her neighbor’s nephew. Erin referred to the boy as a true “gentleman” — and rightly so!

“Talk about admirable,” she wrote. “I’m not sure who this is, but I truly thank you. You’re a remarkable human and I am honored that you know flag etiquette (better than I do). He folded it correctly then placed it on a chair as to not allow it to lay on the ground. I’m so honored. It’s not often that the current generation gets recognized for doing something so patriotic. I appreciate and applaud you, sir!”

Watch the entire sequence as the young man shows his respect for his flag and his country.

Please share if you agree this gentleman deserves applause for his simple but wonderful deed!