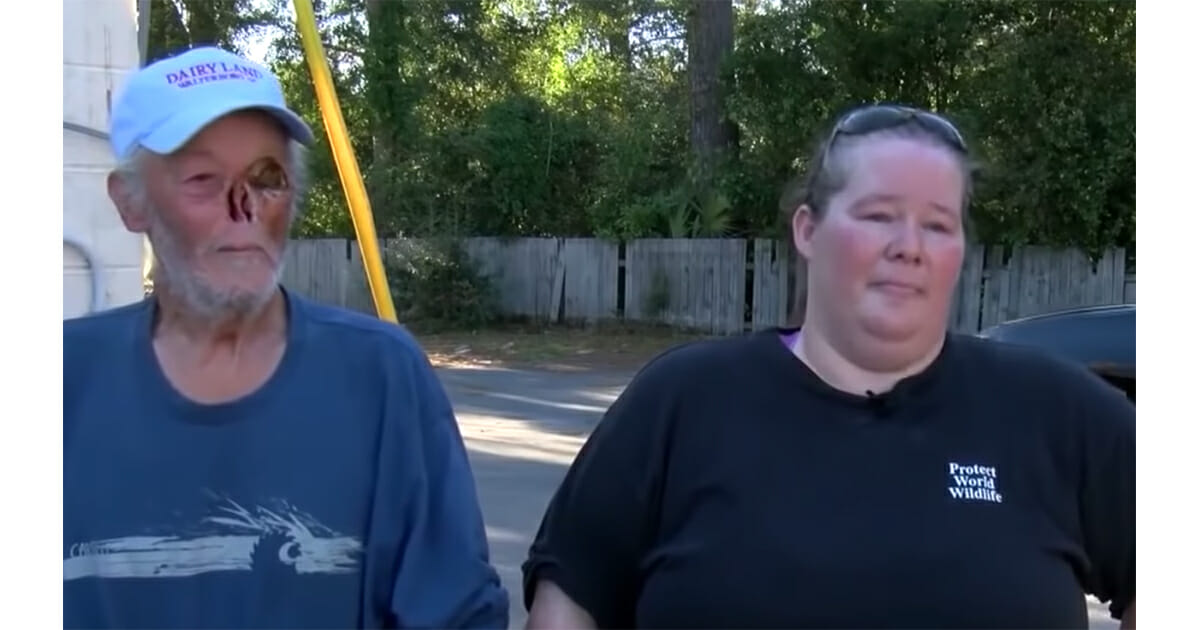 If you’ve ever had to watch someone battle cancer, you’ll have a very real appreciation for what a terrible illness it is.

Which is why those fortunate enough to come out the other side with their lives should be commended for their courage and determination, no matter how they might be affected physically.

Sadly, for Kirby Evans that wasn’t the reality. The 65-year-old is a skin cancer survivor who has fought an incredibly tough battle – the cancerous basal cell carcinoma in his face had to be removed, and the only option was to take away his left eye and nose completely …

As a result of Kirby’s procedures, he’s been left with a somewhat striking appearance. Due the fact that he has a small, fixed income, he can’t afford to pay for reconstructive surgery, and so is left with holes where his nose and left eye used to be.

The 65-year-old can’t even wear an eyepatch, as the skin around his eye is so sensitive that the patch would rub it raw. He’s had a difficult time learning to live with his new face, but tackled the problem with the same resilience that saw him fight off the cancer.

That was until recently, when he was reduced to tears by an incredibly rude store manager in South Carolina.

Kirby had entered a local convenience store to grab a donut and a drink. It was there that he was asked a brutally blunt question.

He paid for his meal and sat outside on a bench, only to have the store manager approach him.

According to Kirby himself, said manager ‘grabbed him by his shirt and pulled him into her office.’ She told him that his appearance was “scaring away” customers, demanding that he cover up his face or leave the area altogether.

His daughter, Brandy Evans, explained: “She told him ‘If he was going to eat in here, he would have to cover his face. He left and went home in tears to tell me what happened.”

Kirby himself was left distraught.

“It hurt deep inside,” the man said to WCSC. “I’ve never been treated like that. Never.”

Kirby’s daughter was left furious about the situation. She wrote a lengthy, heartfelt letter on Facebook, one that quickly went viral by way of garnering over eight thousand shares. It wasn’t long before the entire city of Walterboro had heard about the story.

“My father is the strongest man I know but, as he told me what happened to him, I watched tears roll out of his eye,” his daughter wrote.

“It hurt me to see him hurt like this, especially over something he cannot help. (…) You discriminated against my father for the way he looks.”

The manager of the store even responded to the post herself, claiming that she hadn’t tried to hurt him and that she had no choice but to ask him to cover up or leave, since he was “running her customers off.”

In response, one of her employees resigned on the spot and the manager herself hasn’t worked since the incident in fear of public backlash.

There is a brighter note to the story, however. Via the power of social media, people were made aware of Kirby’s issue and banded together in an attempt to raise money for reconstructive surgery.

In just four days, more than $74,000 was crowdfunded, with Brandy hoping the money will be enough to restore some normality to her father’s appearance.

“I’m telling you what, I didn’t know there’s that many people out there that cared,” Kirby said. “But there are. They’re out there. Everywhere.”

No one deserves to be treated like this, especially not after facing what Kirby has. We hope and pray he gets all the help he wants!

If you think Kirby deserves praise instead of condemnation, share this article to pay tribute!

You should never, ever judge a person based purely on their looks. Never forget that.