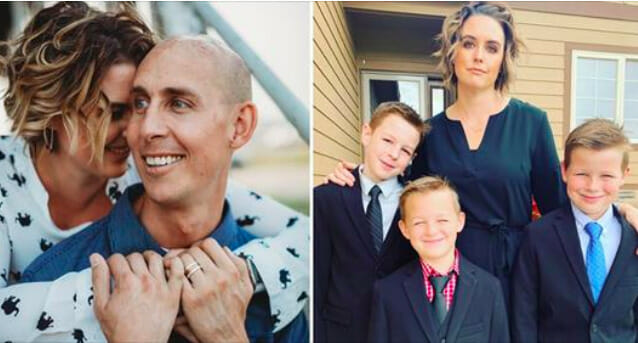 Life is all about the unknown. We may plan, prepare and try to predict our futures — but in a split second, everything can change.

This is something the Shipton family know all too well.

The family of five were devastated when father Jason Shipton, a US Marine, was diagnosed with a malignant brain tumor. The prognosis was even more devastating: he was given just years to live.

But the sadness and tragedy of it all was so beautifully overcome with the strength and sheer spirit of this incredible family.

Read their journey below.

It was 2004 when Amanda met her future husband Jason. Both Amanda and Jason were aware of the challenges that their union would face — Jason was a marine with the US Marine Corps, so they knew he could be asked to leave at any time — and for uncertain periods of time.

Despite this knowledge, nothing could stand in the way of their love and devotion, and they were driven deeper and deeper into their affections. The couple soon got engaged, and just 6 short weeks later, they married.

All this — just before Jason had to say goodbye and head off for a second second deployment with the Marine Corps.

“I have fought the good fight, I have finished the race, I have kept the faith.”‭‭2 Timothy‬ ‭4:7‬ ‭Last night my…

For Better or Worse

For 10 years, the couple stayed strong, despite many instances of separation and the real risk of Jason not returning home at any given time.

“We both knew that he would face combat and that not everyone that left was coming home,” Amanda told Casper Star Tribune.

But for Amanda, Jason was her “best friend” and “the love of my life,” and nothing could stand in the way of that.

They had two sons, then in 2011, just after learning that they were pregnant with their third son, they received devastating news: Jason was diagnosed with a brain tumor. He given just a few years to live.

The Fight Goes On

Still, the Shiptons proved to be real fighters, refusing to give in to hopelessness. Five years later, Jason was still alive.

“We kind of had passed that five-year mark and were just very hopeful that maybe he was that small percentage that it wouldn’t come back,” Amanda said. “But we always knew that the odds of it coming back were very high.”

Unfortunately, the odds were not in their favor, and the cancer did come back. Still, the devoted couple they kept their spirits high, with Jason’s good humor in particular never wavering.

“He never really stressed out, he never got anxious, he was never angry,” Amanda said.

We have a busy day! An MRI this morning and a round of chemo this afternoon! We will have the results from the MRI in a…

On October 28, 2018, at just 37 years old, Jason lost his fight to cancer and Amanda and her 3 boys — Caiden, Hudson and Sawyer — said goodbye to their one and only true hero.

“His fight was good and he has finished his race,” she wrote on Facebook. “Now we must continue on ours. One day at a time. One step at a time.”

This week we laid to rest our hero, our daddy, our best friend and love of my life. As my son broke down that night…

She took to Facebook again recently to share further words to describe the family’s current state of mind.

“This week we laid to rest our hero, our daddy, our best friend and love of my life.

As my son broke down that night and he said to me, “Mom, I just don’t know how I’m supposed to be anymore.” They were such profound words from such a young heart. I had no words of wisdom, only a “Me either”.

All I can tell my boys and my own heart is God is still right here, and near to us on this rough road. I don’t know what it’s going to look like. I don’t know when it all won’t hurt so bad. I don’t even know where to start. But I do know God will help us write this chapter. He is here. He is near. And if that’s all we know right now, that’s enough to lean into and trust in.”

These powerful words from such a young widow leave our hearts mourning with the Shipton family.

Please share the Shipton’s story to honor this hero’s memory and pay your condolences to this young family — and remember to live one day at a time and cherish what you have today — as it can always be gone tomorrow.