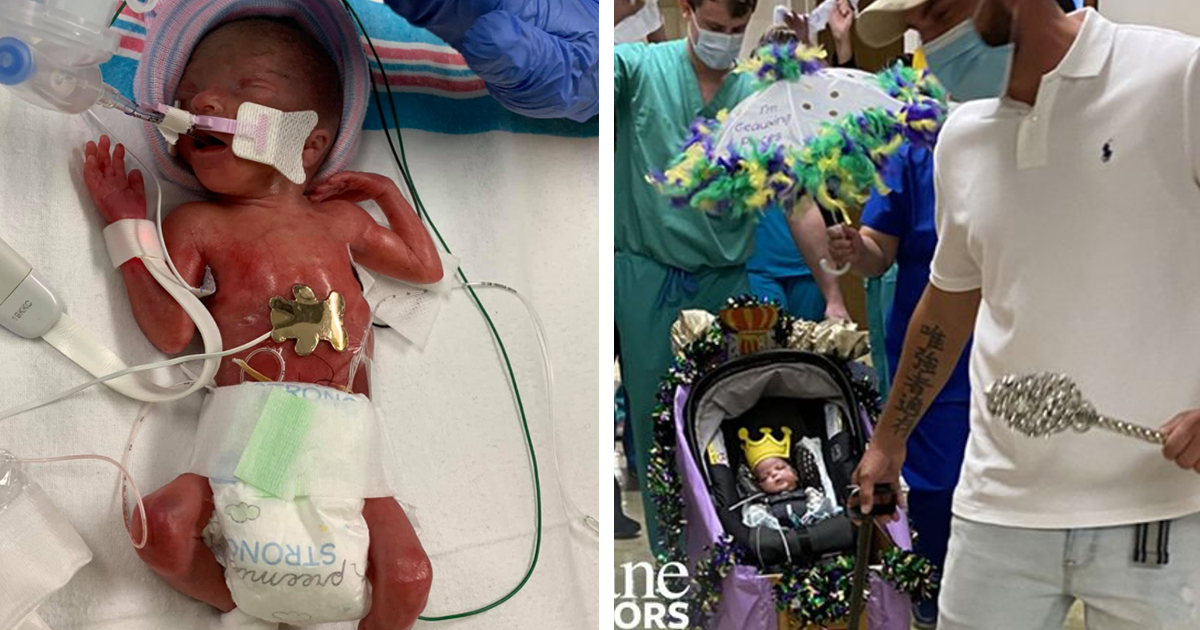 A baby born weighing just 1-pound at birth is finally able to go home after spending more than four months at Tulane Lakeside Hospital in Louisiana.

According to Good Morning America, Russell Appold Jr. came into the world 22 weeks premature on May 22. The baby’s mother, Natasha Williams, was warned by doctors at the time that he had a slim chance of surviving.

Incredibly, though, Russell has proven himself every ounce the fighter. With the help of expert medical professionals in the neonatal intensive care unit, the newborn has gone from strength to strength.

All told, Russell spent 133 days fighting to grow bigger and stronger. Now, his family are finally able to take him home.

“If it wasn’t for them (staff at the hospital) and God, I don’t think he would be here,” mom Natasha told GMA.

“They are so sweet and became our family.”

Before falling pregnant with micro-premie Russell, Natasha, who is a mom to two other children, had been pregnant three times. On each of those three occasions, however, the babies had no heartbeats.

As a result, she was naturally anxious when she fell pregnant with Russell. The situation was hardly helped when, at 15 weeks, her cervix began to open up. It was only emergency surgery that prevented her from going into labor.

A mere seven weeks after that, however, she went into labor again. This time, it was all Natasha and her partner could do to pray to God for help.

Russell, who was scheduled to be born on September 22, came into the world on May 22. He weighed just 1-pound.

Yet despite facing overwhelming odds, staff at Tulane Lakeside Hospital got to work. They administered breathing tubes and tended to excess blood on his brain, as well as treating his jaundice and combating several other issues.

Fast forward four months and Russell has come out the other side.

In a card addressed to Russell’s medical team, Natasha wrote: “As he grows, we will tell him stories of the dedicated nurses and doctors and staff members at Tulane Lakeside Hospital who helped a 22-week-old baby get to the point of coming home.”

On October 1, now weighing in excess of eight pounds, Russell was able to go home.

“He was so small he could fit in my hand,” Russell Appold Sr. said. “But now he’s a chunky baby.”

God works in mysterious ways, but the thanks in this situation must also go to the fantastic medical team who undoubtedly saved Russell’s life!

I don’t know about you, but stories like this one simply fill my heart with joy. Faith, combined with the wonders of modern science, really can make miracles happen.

Share this article to wish little Russell well as he grows up, and to send love and support to his family.