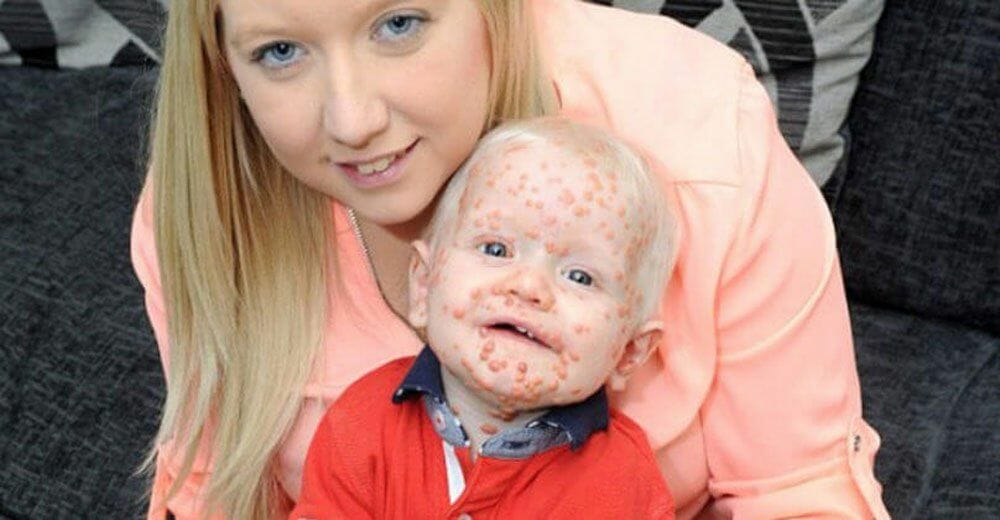 It can be irritating, uncomfortable and a little scary, but chickenpox isn’t extremely dangerous for the vast majority of children.

As a result, 26-year-old mom Stephanie Webster wasn’t particularly worried when her son Oscar developed a red rash on his body.

When she took him to the doctors, though, Steph was handed an altogether different diagnosis. It was one that shocked her to the core.

When Oscar was born, his parents noticed little red dots on his body.

By the time he was ten-months-old, the red dots had become more prominent; a rash that refused to go away and spread across his body and face.

In the beginning, his parents believed it to be an ordinary rash, or possibly even chickenpox.

“At first we didn’t realise there was anything wrong, we thought it was just something normal like neonatal rash – but a midwife saw him and realised there might be a problem,” his mother said, as per The Daily Mail.

“Since then, the spots have got progressively worse and worse.”

When the patches began to increase in number, and continued getting redder, dad Daniel and mom Steph took their little boy to the doctors.

They were desperate to know what could be causing his condition.

In the end, the boy was diagnosed with Langerhans cell hypertrophy; a cancer-like disease that attacks cells of the immune system.

Each year, approximately 1 in 100,000 children are born in the UK with Langerhans’ cell histiocytosis (LCS).

The affliction can begin as a single skin ulcer – the fact that Oscar was born with spots is almost unheard of.

The young boy has been treated with steroids and chemotherapy, but the spots have continued to baffle doctors by remaining. According to Great Ormond Street Hospital, the disease has a 90% survival rate in children, though Oscar’s parents are left wondering how his condition will develop.

Sadly, Oscar’s appearance often causes people to stay well away from him for fear it might be contagious.

“People always ask if he’s got chickenpox, and they often stare at him and point him out in the street – people don’t want to come near him because they think they might catch it,” Stephanie says.

However, his parents do their best to ignore the negativity.

Stephanie says: “It does sometimes upset me, but if you let every little thing upset you you’d never leave the house, so we just get on with it.”

Instead, the family wants to educate others on this unusual condition. It’s their hope that people will come to learn their little boy isn’t dangerous in any way.

The condition means that Oscar has a host of other problems to contend with as well, including an enlarged liver and spleen. His immune system is weakened by the disease because his blood cells and bone marrow aren’t working as they should.

It’s feared that the spots around Oscar’s eyes could prohibit his sight if they continue to grow.

“He’s got spots all over his body – even on his tongue and his eyeballs – which makes me worry about what’s going on inside,” Stephanie explains.

It’s difficult for the family as currently they’ve had very little in the way of meaningful answers as to what has caused the problem and how they can change it for the better.

So little is known about the disease that doctors are at a loss with how best to help Oscar improve moving forward.

And yet he remains his family’s biggest ray of light! Despite his condition, Oscar is a happy child – he has never let his appearance get him down yet!

“As long as he’s happy and healthy, we don’t care about how he looks on the outside. We just want to find some answers,” his mom says.

Unfortunately, his parents have a hard time convincing others that Oscar isn’t carrying a contagious virus, so he doesn’t have that many friends.

Together, we’re going to do our best to change that. Share this message and let’s help raise awareness of this disease!