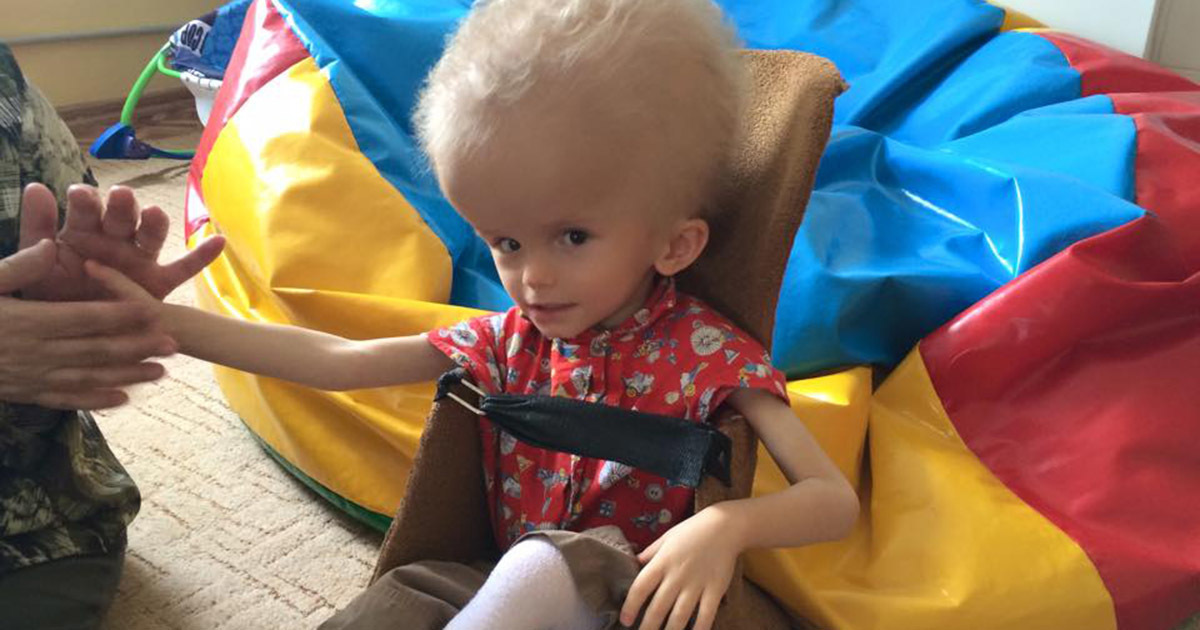 This is Dima Kalekin from Ukraine.

He doesn’t remember his biological parents.

At birth, Dima was diagnosed with hydrocephalus, or “water on the brain.” And when his parents saw him for the first time, they made a heartless choice.

They left the hospital without him and never looked back.

Dima was forced to begin life in a orphanage for disabled children in Krematorsk in eastern Ukraine, writes the Ukrainian newspaper Fakty i Kommentarii.

Four years later, Dima still couldn’t do simple thinks like eat with utensils or walk. The orphanage staff doubted that he’d develop normally in the future. But they were surprised he had survived for so long and could even say a few words.

But it wouldn’t be the last time that Dima would surprise the world.

When war broke out in eastern Ukraine in early 2014, Dima suddenly faced a new danger: the orphanage was in the middle of a disputed area.

So along with all of the other kids at the orphanage, Dima was forced to evacuate and seek safety elsewhere.

For a full week, the children and staff were forced to go from place to place without any water, food, or medicine.

Finally, a group of separatists noticed that some of the children were close to death, so they brought the children to the Ukrainian authorities.

The children ended up in a hospital in Charkiv, the country’s second largest city. When doctors saw Dima for the first time, they had to hold back tears. Trying to escape the war had really taken a toll on him.

The doctors didn’t think Dima stood a chance of surviving in the war-torn country. And they were so desperate that they contacted a priest to pray for a family to adopt the boy, writes Hefty.

The priest’s prayers were soon answered. First, Dima and his friends ended up in a new orphanage. And a few weeks later, a couple named Ernest and Ruth Chaves arrived from Vermont in the United States. They had heard about the war and wanted to adopt a child from the war-torn region.

As soon as they saw Dima, Ernest and Ruth knew they wanted to adopt him.

They decided to adopt Dima, and the little boy’s life changed again—this time for the better.

Ernest and Ruth had already adopted seven children and were used to the parenting role. Plus, they had a lot of experience with all the necessary paperwork, which allowed Dima to join them in Vermont relatively quickly.

Two months after his adoptive parents visited the orphanage in Ukraine, Dima traveled with them to his new home in the United States to join all his new siblings.

Life with his new family was by far the best thing that ever happend to the little boy. He made progress as soon as he arrived in Vermont. Just a few days after he got to his new home, his parents discovered that he was able to eat with a spoon!

A year later, the boy who left Ukraine on the edge of death was like a whole new person.

Now, Zebediah can talk. He can understand both Ukrainian and English. And he can walk.

American doctors have examined Zebediah’s brain and are convinced that it hadn’t suffered much damage from the disease. They say that chances are good that he’ll develop normally.

What inspiring fighter! Zebediah has a long way to go and will undergo several operations, but he’s already shown the whole world his invincible strength and willingness to live!

I think Zebediah’s future looks bright and I wish him and his family all the best! Share if you do,too!