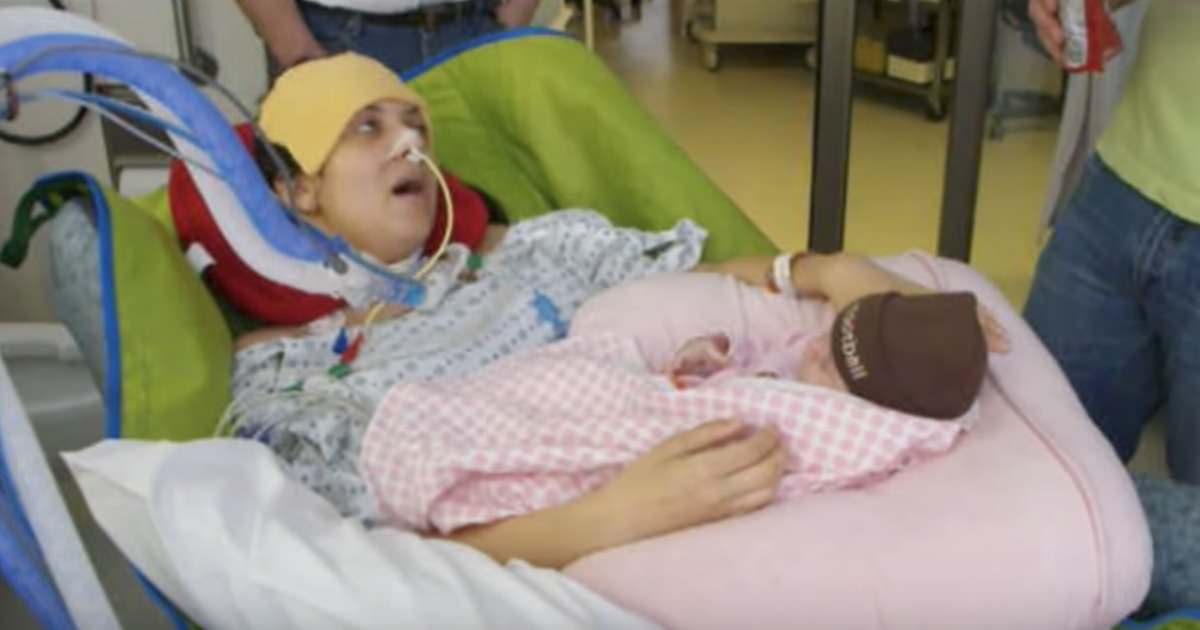 Holly Gerlach from Edmonton, Canada had dreamed of becoming a mom since she was a little girl. Then at the age of 26, she realized her dream. Holly gave birth to a daughter named Casey. The delivery went well and the new mom was delighted to bring her beloved daughter home from the hospital.

But what she didn’t know was that her happy life would take a sudden and dramatic turn—just a few weeks after giving birth.

It all began when Holly felt severe neck pain and weakness in her legs.

Her condition quickly deteriorated and she went to the hospital.

When doctors examined Holly, they realized how bad the situation was: the new mom was paralyzed from the neck down.

She was diagnosed with Guillain-Barré syndrome (GBS). The rare disease is characterized by paralysis in the arms and legs, which increases over the course of a few days or weeks.

According to doctors, Holly’s delivery had probably triggered the disease.

The disease afflicts about one person in 100,000, according to the US National Institute of Health.

Symptoms can go away by themselves, but in most cases, treatment is needed, and in extreme cases, intensive care is required.

Holly, for example, was paralyzed and needed a respirator to breathe. All anyone could do was wait for her to get better, but she obviously was in a lot of pain.

At one point, Holly whispered, “I’m in so much pain,” into a nurse’s ear—something that worried doctors.

But fortunately, Holly had something that gave her the strength to keep fighting: her newborn daughter.

Holly did her best to try to meet her daughter every day, even though it exhausted her.

Although the disease had paralyzed every muscle below her neck, Holly never gave up. With the help of a lift, she was able to get out of bed and sit on a chair.

She could barely speak, but she tried to mimic the words of relatives and healthcare professionals to communicate.

Holly met her daughter every day, even though the thought that she couldn’t be the mother she wanted to be crushed her.

After weeks of breathing through a respirator, something extraordinary happened that gave Holly the hope she so desperately needed—she could breathe on her own again

Soon, the paralysis in her hands began to fade.

After 70 days, Holly left intensive care. She could talk again and sit up in a wheelchair.

Holly grew stronger every day. After 78 days, she started physiotherapy, where the most important thing was to train her legs. On day 87, Holly stood up for the first time in three months.

… Pick up her now four-month-old baby and hold her in her arms!

After 94 days, Holly was able to walk again with the support of a walker.

And finally, on day 126, she was allowed to return home.

Holly had to relearn how to do many basic actions, including brushing her hair and teeth, writing, eating with utensils, and walkin without a walker.

But if that weren’t enough, check out what she managed to do a year later…

Now, Holly is in better shape than ever!

She lives her life to the fullest, something that felt impossible when the disease held her in its grip.

With her willpower and inner strength, Holly was able to overcome a disease that almost took her life.

It it weren’t for a mother’s love for her daughter and the support from her loved ones, Holly’s story might not have ended well.

And the healthcare staff also deserves a gold star, because without them, Holly wouldn’t be where she is today.

I hope Holly has many happy years to come with her daughter and her family. Like and share if you do, too!