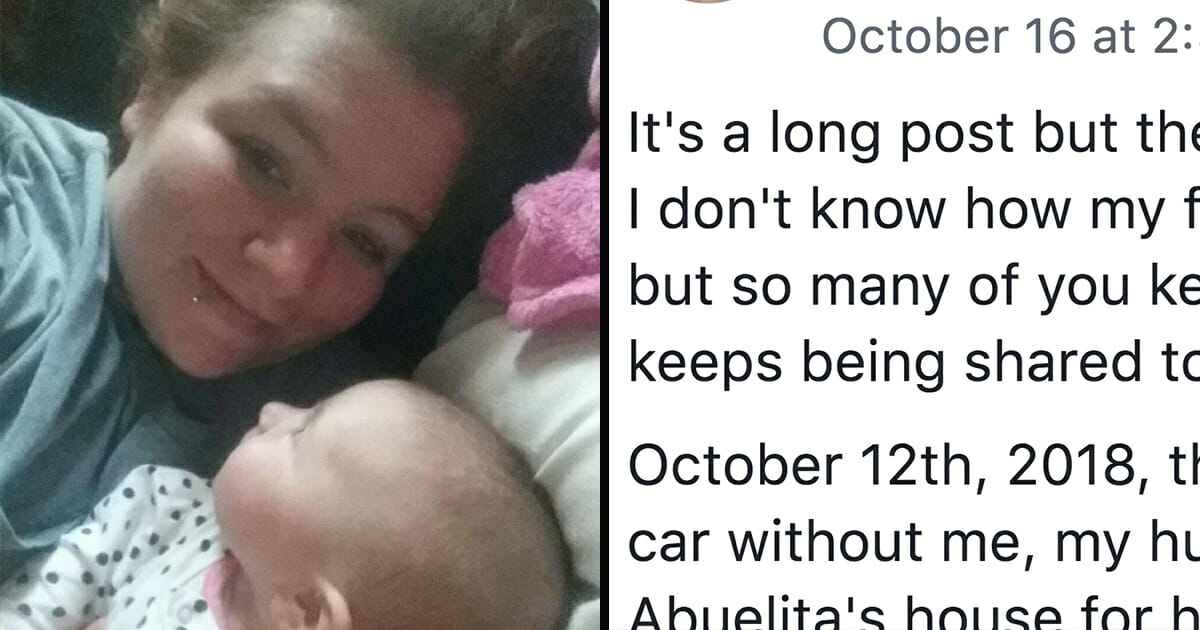 Having raised children of my own, I simply can’t imagine how I would survive if one of them was to pass before me. Losing my partner in the same incident would certainly be too much to bear.

Which is why I can’t begin to even comprehend what Jessica Lybrand must be feeling after a drunk driver hit and killed her baby, Elliana, and her husband, Zachary Lybrand.

It was the day of Jessica’s 21st birthday, and it seemed no different to any other. She and her partner had planned a little bit of a celebration, with Elliana set to go to her grandmother’s house for the night. It was to be her first night away from her mom since birth.

Jessica could never have known what was to unfold …

The 21-year-old mom was finishing her preparations for the day when she decided to try and contact her husband. He’d gone to drop Elliana off, but she couldn’t reach him when she tried.

It transpired that Zachary and Elliana had been hit by a drunk driver. 29-year-old Jack Satterfield was driving a tractor-trailer while under the influence and his vehicle collided with the one Zachary was driving, killing him and Elliana instantly, according to Fox 43.

Shortly afterwards, the car burst into flames, burning Zachary and Elliana beyond recognition. Elliana was just 16-months-old at the time, Zachary 24 years.

Jessica Lybrand has since taken to Facebook to write an emotionally charge post raising yet further awareness on the dangers of DUI.

“I don’t know how to even begin to explain how badly I want to hold my babies but I can’t,” she wrote.

“They are in pieces, down to the bone with nothing left to hold. I just want them back. I still don’t think this is real.

“They are suppose (sic) to come home. Go out to my birthday dinner. Instead I have to somehow get the courage to bury my babies and make so many heart breaking decisions RIGHT NOW.”

It's a long post but their stories deserves to be told.I don't know how my fingers are even strong enough to start…

She later continued: “I can’t talk to anyone yet but all that these articles need to know is written here so please share. Share my babies stories, LET THEM BE A REASON THAT PEOPLE MIGHT CONSIDER JUST A LITTLE MORE.

“TAKE A SECOND AND THINK TWICE. JUST DON’T DRINK AND DRIVE. EVEN IF ITS JUST ONE LIFE, HONOR THEIR LEGACY AND DON’T PUT INNOCENT LIVES IN DANGER. Because I lost all of my family and I’m left without my purpose for living and unable to go to them because i know it would break their hearts.”

Jessica’s set up a GoFundMe page to help cover the funeral costs for both Zachary and Elliana.

Our prayers and thoughts are with Jessica and her family at this incomprehensibly difficult time. We wish for a world where things like this don’t happen, but it’s all we can do to help raise awareness in a bid to prevent them occurring in the future.

If you want to send prayers to Jessica, help us by SHARING this article on Facebook and getting her message out there.

There’s nothing we can do to bring Zachary and Elliana back, but we can honor their legacies by spreading Jessica’s warning!