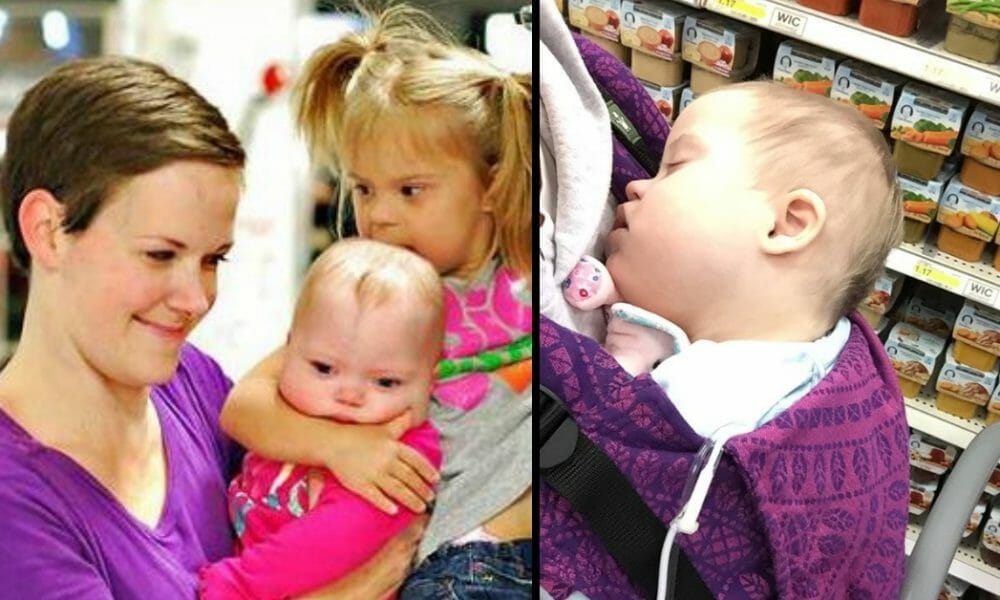 At the very least, it can be extremely annoying when strangers feel they have the right to delve into the lives of others; to comment and make unwanted, unneeded assertions.

If you haven’t walked in a person’s shoes, if you don’t know exactly what they’re going through and the circumstances of their daily lives, is it right for you to open your mouth and give an opinion?

Mom Kelly Dirkes is, sadly, used to getting ‘advice’ from strangers.

She and her husband have adopted two children with Down’s syndrome, and many a stranger has approached her before and tried to offer their thoughts.

In one instance, a short time ago, Kelly was carrying her young daughter in a baby carrier while shopping at the store. As she browsed the shelves, Kelly was stopped by a woman who had something to say about her little girl.

The woman told her that her child would be “spoiled”, and would “never learn to be independent” if her mom continued to carry her.

Kelly was stunned; she had no idea how to answer. She wanted nothing more than to put the woman in her place right there and then. Instead, she took a deep breath, calmed herself down, kissed her daughter on the head and remembered that decisions made in anger are rarely the best way forward.

When she got home, Kelly sat down and wrote an open letter to the woman. Her words are so powerful that we believe everyone should see them.

“Dear Woman in Target-“ it begins.

“I’ve heard it before, you know. That I “spoil that baby”. You were convinced that she’d never learn to be “independent”. I smiled at you, kissed her head, and continued my shopping.

If you only knew how she spent the first ten months of her life utterly alone inside a sterile metal crib, with nothing to comfort her other than sucking her fingers.

If you only knew what her face looked like the moment her orphanage caregiver handed her to me to cradle for the very first time–fleeting moments of serenity commingled with sheer terror. No one had ever held her that way before, and she had no idea what she was supposed to do.

If you only knew that she would lay in her crib after waking and never cry–because up until now, no one would respond.

If you only knew that anxiety was a standard part of her day, along with banging her head on her crib rails and rocking herself for sensory input and comfort.

If you only knew that that baby in the carrier is heartbreakingly “independent” –and how we will spend minutes, hours, days, weeks, months, and years trying to override the part of her brain that screams “trauma” and “not safe”.

If you only knew that that baby now whimpers when she’s put down instead of when she is picked up.

If you only knew that that baby “sings” at the top of her lungs in the mornings and after her nap, because she knows that her chatter will bring someone to lift her out of her crib and change her diaper.

If you only knew that that baby rocks to sleep in her Mama’s or her Papa’s arms instead of rocking herself.

If you only knew that that baby made everyone cry the day she reached out for comfort, totally unprompted.

“Spoiling that baby” is the most important job I will ever have, and it is a privilege. I will carry her for a little while longer–or as long as she’ll let me–because she is learning that she is safe. That she belongs. That she is loved.

If you only knew…”

Often people don’t have proper insight into another person’s thoughts, dreams, hopes, fears and background, and yet they’re so quick to judge anyway.

Once again, we feel a need to remind people to never judge another without first going a mile in their shoes.

Do you applaud Kelly’s response to this utterly insensitive woman? If so, share this article on Facebook to show your support.