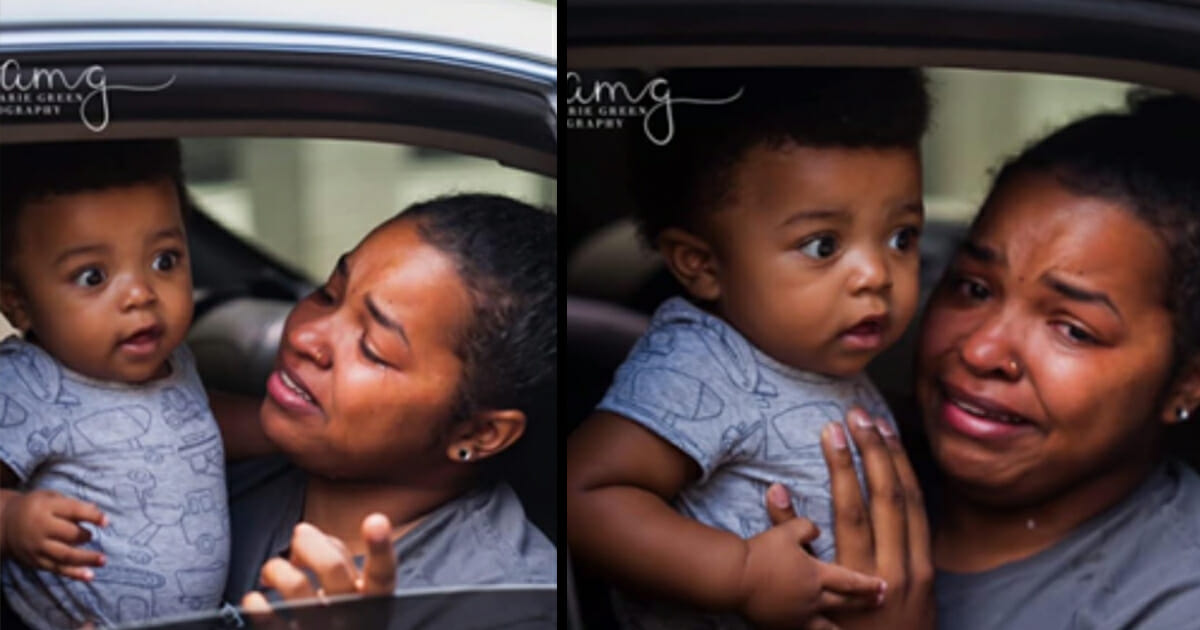 The murder of George Floyd by four Minneapolis police officers last month has sparked protests around the world.

People are rightly supporting the Black Lives Matter movement and all it stands for, protesting the abuse and prejudice people still have to live with based purely on the color of their skin.

One such protestor is D’Asia Hervey of Chicago. The 24-year-old wasn’t sure if she should attend a demonstration held in the wake of Floyd’s death, but after speaking with her mother, Stephanie Woodall-Wilson, she was persuaded to go.

Resulting photographs taken at the protest, showing D’Asia and her almost 8-month-old son, Matthew Hervey, have gone viral, and they speak volumes over the important of the movement at hand.

Photographer Amber Marie Green was also at the protest D’Asia attended. She explained to CafeMom that she felt it her “duty to capture this part of history.”

As per reports, Green was snapping photos of the protest when her attention was drawn to a young mom in one of the cars passing by.

In that car were D’Asia and her 8-month-old son. D’Asia’s mother, Stephanie, was driving. They were part of a vehicle convoy showing its support for the Black Lives Matter movement. The family later got out of their car and joined the protest on foot for three hours.

Stephanie explained: “I happened to notice that there were people taking pictures, so I said, ‘D’Asia, go ahead and let them see you and Matthew because this about your future and his and you’re going to see what it’s like for mothers — because she’s a new mom — to worry about their adult children, or their young child, or your son. You need to understand why I worry so much.'”

As fate would have it, Green was right by the car, camera in hand, when D’Asia held little Matthew up to the window.

“I saw a mother holding her son while weeping,” Green told CafeMom. “She kept encouraging him to look at the protesters.”

“I didn’t even see her,” D’Asia said. “I saw her take the picture but I didn’t even notice she was taking a picture of me.”

D’Asia was reduced to tears as she saw people of every ethnicity gathered in support of the important cause. She held her son up and explained to him what was happening.

“I told him to look at what everybody was doing for his future,” she told Today.com. “And then, my mom was like, ‘Look, Matthew, this is for you — this is so people can understand that you are not a threat when you’re walking down the street.'”

Given that Green and D’Asia hadn’t met before, Green had no way of knowing who it was she had photographed in the car. She uploaded the image to Facebook, where it immediately proved a viral hit.

Thus far, more than 152,000 people have shared Green’s photo, and the two women are now friends.

“She reached via Facebook messenger saying (jokingly) take the photos down because she looks a mess,” Green said. Green found out through their conversation that Woodall-Wilson, Hervey, and her son are homeless.

“I’m more passionate now to help them,” she explains.

“You have to get up and go. Get up and make your voice heard.”

Indeed, change is needed now more than ever. The days where people can be prejudiced against purely based on the color of their skin are OVER!

Share this article to help spread these wonderful photographs further.