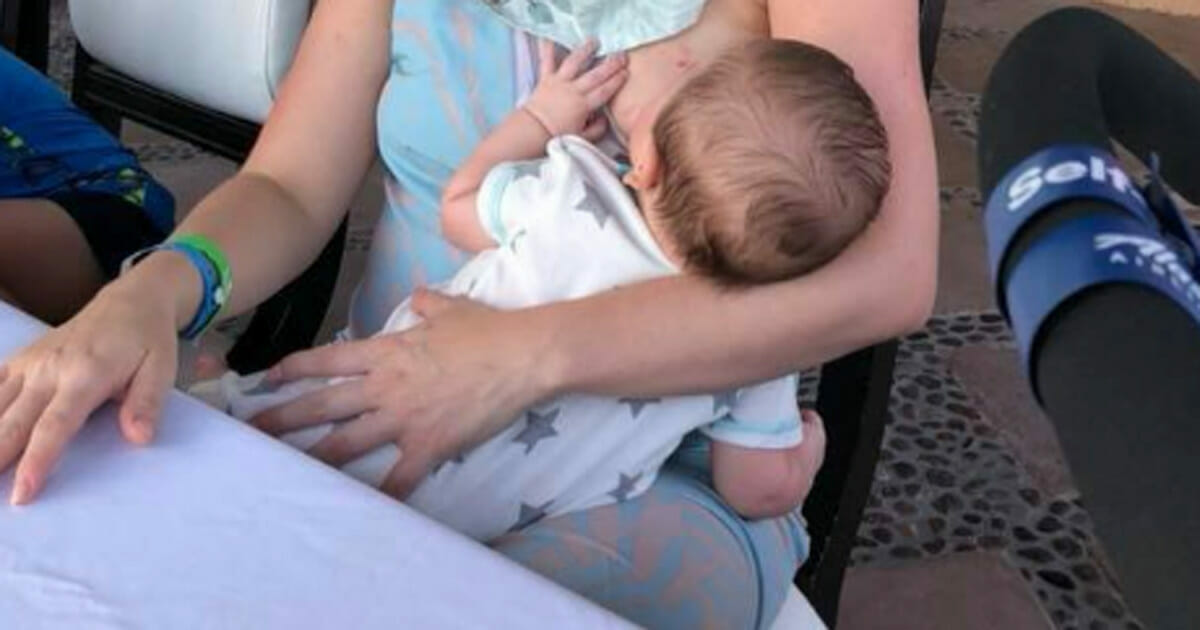 The idea of moms breastfeeding in public is one that continues to be the cause of hot debate.

It’s a topic that generally divides the masses. Some believe breastfeeding is a natural process, and thus something women should be allowed to do anywhere. Others, however, opine that it’s tantamount to indecent exposure, and so try to root it out wherever they find it.

When mom of three Melanie Dudley was feeding her baby at a restaurant, she was approached and told to cover up.

That people still get offended by a mother breastfeeding her young child in public is something I can’t really fathom. What’s more, it’s a shame that the internet seems to be drowning in videos of mom’s being shouted at by strangers for doing so.

Melanie Dudley, a mom of three, was sitting in a restaurant in San Cabo Lucas, Mexico, enjoying a calm day with her family. Outside, the weather was hot and humid, with temperatures reaching more than 90 degrees Fahrenheit. When her youngest, aged just four months, became hungry, Melanie took out enough of her breast to feed him, taking care not to show everything.

However, she soon found out not everyone in the restaurant thought this acceptable. A stranger approached Melanie and asked her to cover herself. Melanie listened to his concerns and responded accordingly, though perhaps not in the way he was expecting.

“I did have the cover on, but it was so hot. It was like, 95 degrees, and my little baby was sweating,” the Texas mom told Today.

Of course, Melanie thought the people around her would understand. On the contrary, though, a man asked her to promptly cover up.

She did exactly that – as seen in the picture below …

A friend’s daughter-in-law was told to “cover up” while feeding her baby, so she did!? I’ve never met her, but I think…

Another woman at the restaurant took a photo of Melanie and uploaded it to Facebook after obtaining Melanie’s consent.

It’s no exaggeration to say that the image spread like wildfire online. At the time of writing, the picture has some 227,000 shares and 138,000 likes. The photo isn’t just being celebrated by mothers worldwide, but thousands of others have weighed in with their thoughts.

“Well done”, “absolutely right”, “fantastic”, are just some of the 20,000 comments on the picture. I, for one, totally agree; Melanie’s response was great!

Melanie did so well to silence a man who told her to cover herself.