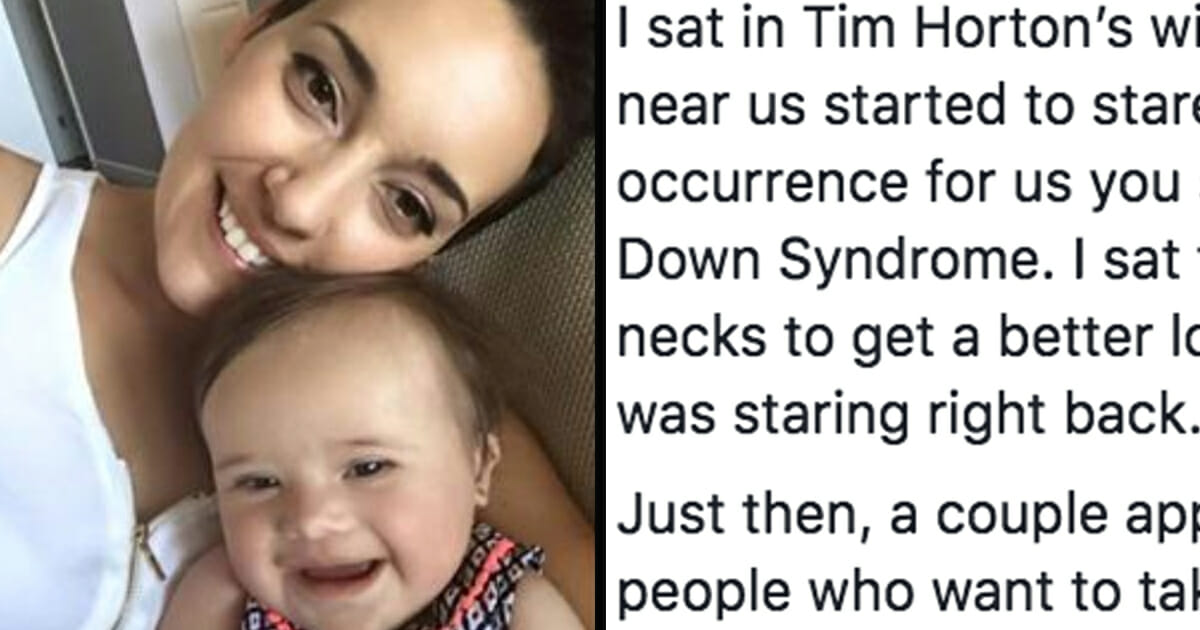 It’s a sad truth that most parents of children with disabilities have to become accustomed to people staring in public.

Of course, just because a mom or dad is accustomed to it doesn’t mean they have to be OK with it. It’s no doubt difficult to say nothing when you feel judging eyes cast on your child simply because they look or behave slightly differently.

Pamela De Almedia knows all about that. Her daughter Sophia has Down syndrome, but she’s still a precious soul who wants to be just like the other kids. Unfortunately, Pamela had started to notice her little girl getting odd looks and different treatment when in public …

Pamela began a blog, in which she discussed how she’s not ready to accept people staring at her daughter, nor whispering behind their hands when they think Sophia can’t hear them. She wrote that it’s got to the point where her other daughter has realized it, too.

On her blog, Slice of Life, Pamela revealed one experience that really got to her. She was left crying in the coffee shop afterwards because of it.

“Two ladies sitting near us started to stare and whisper. This is a pretty frequent occurrence for us you see; because my daughter Sophia was born with Down Syndrome. I sat there and watched these two women crane their necks to get a better look at her; completely oblivious to the fact that I was staring right back. Today it bothered me. It really bothered me.”

Pamela was angry, and at that very moment an older couple approached them. She braced herself, expecting more gawping.

Only, the couple weren’t there to pass comment. The man didn’t say a word to Pamela – he didn’t stare or whisper, he simply gave Sophia a high five and then shook her hand.

It transpired that the man had something profound to tell Pamela. Tears came to his eyes as he turned and spoke.

“I have a story I would really like to share with you. But I am afraid I won’t get through it without choking up,” he said.

Pamela wrote: “He told me that he had watched the news last night. There was an interview with a mother who had recently given birth to a child with a major disability. She was on the news defending her decision to keep her baby. She was defending her choice NOT to terminate despite her doctors encouraging her to do so.”

The man proceeded to tell Pamela that a parent can never know just how much of an impact their child might have in the world.

“He looked at me just before he turned to walk away and said, ‘You are a beautiful person. Your daughter is beautiful. Congratulations!'”

After the couple left them, it was Pamela’s turn to shed tears. He was the first stranger to congratulate her on the birth of Sophia.

As she says: “He was the first complete stranger to recognize her WORTH. Her VALUE. Her BEAUTY.”In a world where my daughter’s life is whispered about, where she is stared at, this man saw her IMPORTANCE. What a wonderful reminder that every human being, no matter how small, has true worth and value. Let’s encourage ourselves and those around us to recognize everyone’s unique beauty every day.”

For Pamela, it was no doubt an experience she’ll cherish forever. What a kind-hearted soul that man is; we hope he’s aware of the positive impact he’s had on Pamela’s life.