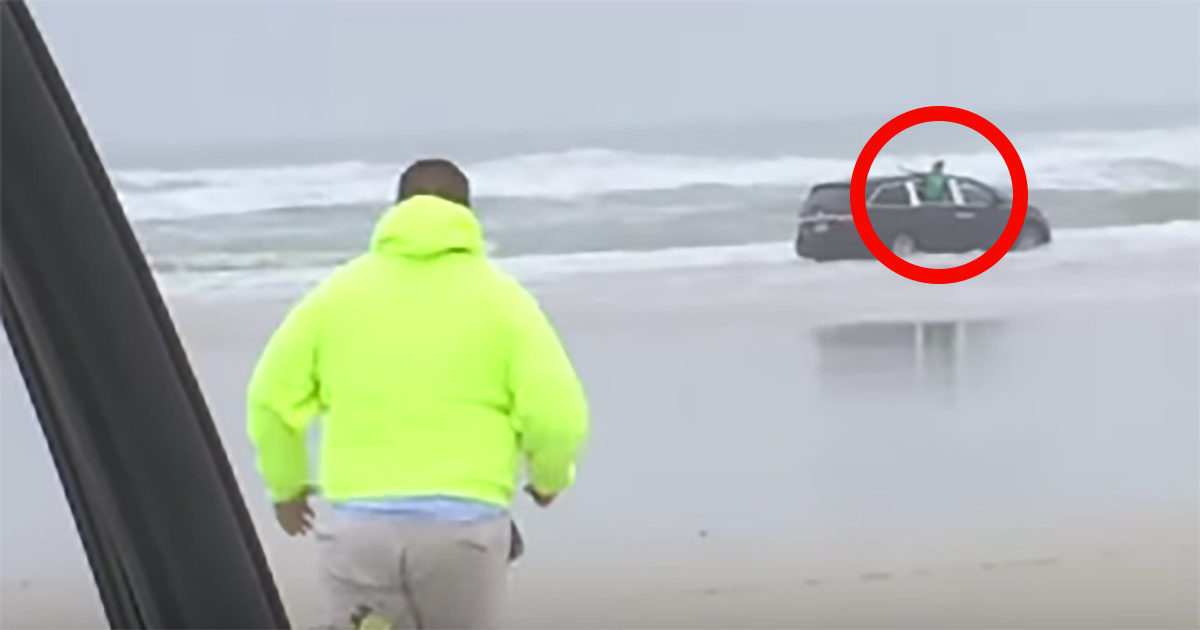 Tim Tesseneer was driving along Daytona Beach in Florida with his family when he suddenly saw something strange.

A minivan was driving straight toward the ocean.

Tim’s wife picked up her camera to film the unusual sight.

Then seconds later, there was a desperate scream for help.

The scream seemed to come from a young child.

So without hesitating, Tim jumped out of his car and ran toward the car.

But he never could have prepared himself for what he would find inside.

There were two children in the back seat and they crying out for help. “Help us! Help us! Our mom’s trying to kill us!” they screamed.

Their mother was in the driver’s seat and it was obvious she wasn’t herself.

“She looked back at us with this awful, blank stare. I’ve been using the word ‘possessed.’ I hate to use that, but that’s what it looked like,” Tim told ABC News.

By that time, another passerby joined Tim in trying to reason with the mother and get the kids out of the car.

Then finally, they managed to get an arm through a window in the back seat and open the door.

From the road, onlookers were relieved to see the men carry two children out of the car.

But as the minivan moved deeper into the ocean, Tim knew something they didn’t: there was still a baby sitting in the back seat of the car.

Soon, rescue workers had arrived on the scene.

At the same time, the mother-of-three calmly walked out of the car as her minivan floated out to sea with her baby still inside.

Fortunately, a rescue worker was able to get in the car and save the baby — and just in time.

A second later, a large wave pounded the minivan and it was underwater.

It seems the mother, who was also pregnant at the time, had been in the care of a mental health facility the day before but had checked herself out.

Her sister took her keys so she couldn’t go anywhere and called the police to warn them about her condition. But the police didn’t have the authority to do anything and the woman got hold of her keys.

And it was then that she drove her minivan straight into the ocean with her three kids sitting in the back seat.

If Tim and the other heroes hadn’t sensed something was wrong and acted immediately, the story could have turned out differently.

After the incident, the children were put in state custody while the mother underwent a psychiatric examination.

Later that year, it was determined that the mother had had a mental breakdown but was no longer a threat to her children.

We’re so glad these heroes acted immediately and saved these poor children.

Share if you also think these heroes should be honored for his brave courage!