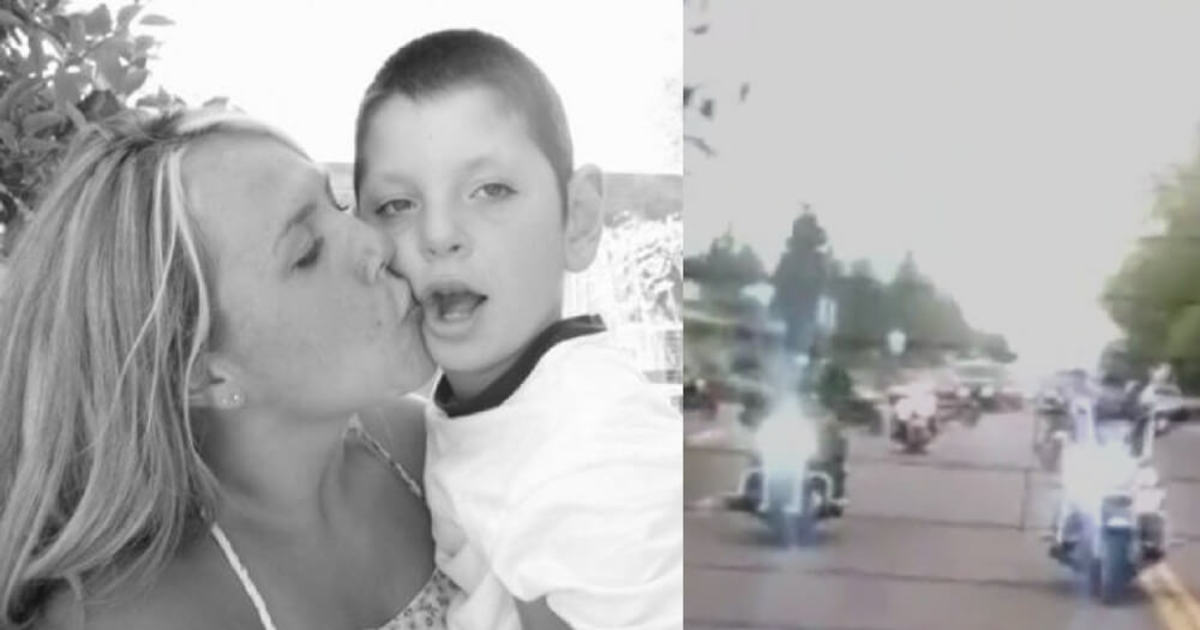 It would be naive to think you could go through life without experiencing any grief.

But at the same time, you can never prepare yourself for how it feels when you have to say goodbye to a loved one—especially if it’s your own child.

In this kind of situation, you need to all the support you can get from loved ones—and beyond.

And sometimes, entire communities and organizations show their support in a way that really hits you right in your heart.

Teegan Keith Sakaguchi grew up in Idaho Falls, Idaho and was in many ways like any other boy.

The difference was that he had difficulty walking and talking because of his weak muscles.

Immediately after birth, Teegan was diagnosed with Propionic Acedemia (PPA). It’s a hereditary, congenital metabolic disease that leaves the body without the enzymes to break down protein.

And because Teeagan couldn’t get protein, he became weaker every year.

But the boy never lost the joy of life, and his great passion was motorcycles.

Teegan’s mother, Aubrey Ashley, and her ex-husband both worked at a Harley-Davidson store, so Teegan grew up around bikes.

But Aubrey, who was a single mother with two children, soon had to give up her job at the store.

When her second son, Cohen, was born in 2012 with the same condition as Teegan, she chose to take care of her boys full-time.

Teegan participation into studies and conferences contributed to several medical advances in fighting his unusual disease. And because of this, his younger brother, Cohen, was able to become the first patient with this disease to receive a successful liver transplant.

Since then, Cohen has had no problem digesting protein, and thanks to his big brother, the treatment of this disease looks bright in the future.

Unfortunately, doctors couldn’t do as much to save Teegan.

On May 1, he passed away after years of battling the unusual disease.

However, Teegan’s joy and courageous stand against the disease inspired many during his journey. And he became a role model for almost everyone who got the chance to meet him.

With the help of several donors, Teegan’s mother’s best friend, Jacquelyne Amber, managed to collect almost $4,000 to help with the funeral expenses.

Amber wrote some kind words on GoFundMe describing how her best friend’s son was during his time here on earth.

“Despite this compromised life Teegan was given with large challenges, Teegan was the happiest and strongest litle boy. He fought this battle and disorder, day in and day out his entire life with a smile on his face and a laugh that could light up anyone’s bad day,” Amber wrote.

The funeral also clearly showed the effect Teegan had on people.

On the day of Teegan’s memorial service, bikers followed the funeral procession all the way to the ceremony.

Teegan’s mom, Aubrey, could hardly believe her eyes, and when she looked closer, she saw more and more bikers arriving.

More than 30 men and women waited outside the funeral, ready to escort the mourning mother and her family.

Several local bikers from several clubs in Idaho were there to show their support.

Teegan must have been smiling up there in heaven. And his mother was touched to see saw all kinds people on their motorcycles.

“Teegan always had a love for bikes, and I’m sure to feel that wind in your hair would be the best feeling for him,” Aubrey Ashley said. “I couldn’t have asked for a better honor for him.”

Bikers might seem tough and hard on the outside, but they often have hearts of gold and want to support those who have it tough in society.

Never judge a book after the cover. There are many people out there who are ready to stand up and help members of their community get through the tough times.

Please share this story on Facebook so that more people can hear about the kindnes of these awesome bikers!