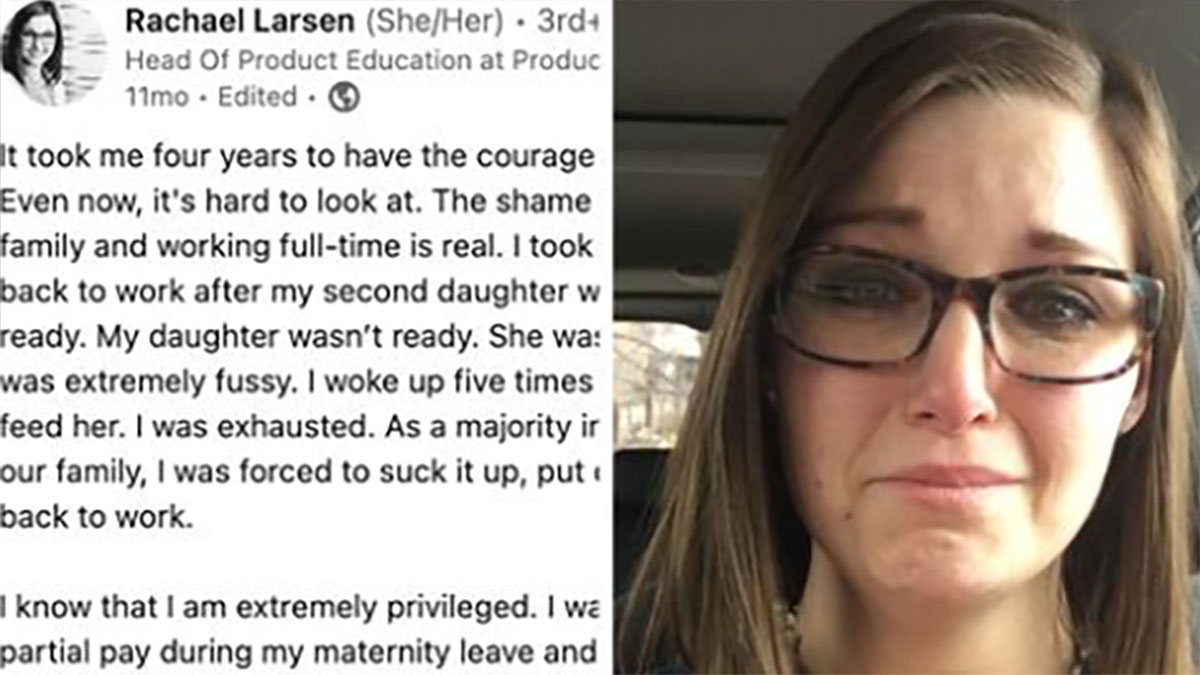 Anyone who has had a baby in the U.S. knows that when it comes to returning to work there are tough decisions to be made.

Many mothers don’t have a choice whether they return to work but with the average amount of maternity leave being 10 weeks in the U.S., leaving your baby and returning to work is not only physically and mentally exhausting for a new mom, but also heartbreaking.

A 2019 study of which of the richest countries in the world were the most family friendly put the U.S. at the bottom of the list for being the only one that offered no national paid leave for moms.

Rachael Larson knew all about this after going back to work when her first child was just 8 weeks old. She told Bored Panda that at the time, going back to work felt like a good idea. She enjoyed getting a break from “the grueling work of caring for a newborn who wants to eat every two hours and cries non-stop.”

But when Rachael had her second child she considered herself lucky to be able to take 12 weeks off, however, when it came time to return to work Rachael knew that neither she nor her baby were ready to return.

She loved her job but felt like she needed more time at home and was only returning to work after 12 weeks because her family needed the income.

‘Forced to suck it up, put a smile on’

“As a majority income source for our family, I was forced to suck it up, put on a smile, and get back to work,” she wrote.

Rachael took a selfie on her first day back at the office after having her second child. She never shared that selfie or her story until 4 years later when she decided to share on LinkedIn.

She said it had taken her so long to share because new moms returning to work so soon after having their babies often feel like they have to put a brave face on and just get on with it.

She admits that even after four years she still finds it hard to look at the picture of her distraught face, desperately trying to hold back the tears.

In the post she explained that she knows she is “extremely privileged” for getting any paid time off work, but she feels “shame around raising a family and working full-time.”

She explained that she wasn’t ready to return to work; her daughter was “extremely fussy” adding “I woke up five times the night before to feed her. I was exhausted.”

She ended her post with a call for more support for working moms writing, “We need to do more to support parents and families. It may have taken me four years after I knew I wouldn’t have another baby to share this photo. But I’m glad that I have the courage to speak my truth now.”

Rachael’s post was met with so many comments from moms who knew exactly how she felt.

Mom Katarina P. wrote, “I was ‘lucky’ to have 3 months maternity leave with my last 2, but really, who are we kidding? At 3 months old, babies are just barely starting to learn to sleep through the night, which means a mother is returning to work sleep-deprived. Not just ‘didn’t sleep well’; I mean where you maybe got a few hours of sleep (interrupted sleep) every night for the past not just 3 months, but also, who sleeps through the night in the latter half of their pregnancy? To put another perspective: Sleep deprivation is also a torture-tactic in some military settings. Yet we expect mothers to return—sleep-deprived— ready to pull up their sleeves & bounce back & be like ‘normal’ when nothing about their experience there is normal.”

Marta Tubielewicz (Nestorowska) commented, “Maternity leave in US was one of the greatest cultural shocks I had to deal with. When I was pregnant with my first child, being here in US, in Poland the new maternity law was just established giving women 8 months to 2 year paid time with their children. Fathers were also given paternity leave. I didn’t take a picture on my first day back to work after maternity leave, but it was one of the hardest days in my life…without any exaggeration! Thank you for sharing!”

Expecting a mother to return to work a few weeks after they’ve had a baby is barbaric and yet in 2022 the richest country in the world still expects this from new moms.

Do you think laws should change to allow all moms more time to heal, recover and bond with their babies before returning to work and how long do you think they should be entitled to?