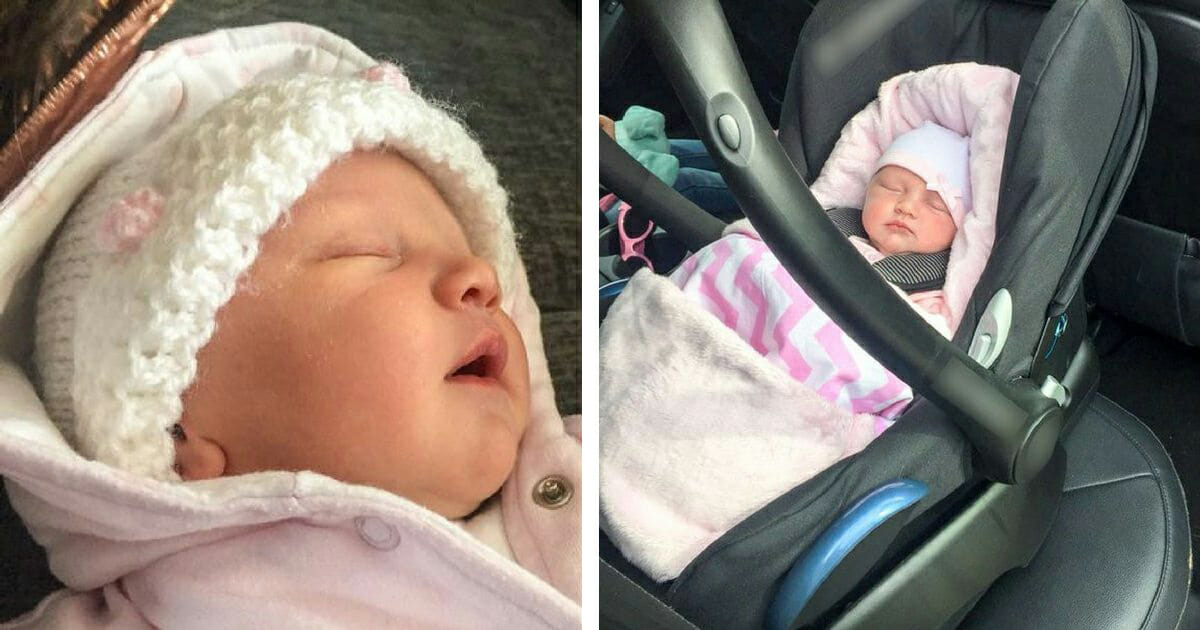 There can be few things worse than watching your baby fighting for their life.

Unfortunately, that was exactly what befell Scottish mother Kirsti Clark, 28, and her husband Christopher Clark, 29, on April 4 last year. The pair had decided to take their daughters out of the day – three-year-old Malena and three-week-old Harper – but the trip would later spiral into a nightmare.

They had a long journey home due to rush-hour traffic, but after laying Harper down on her play mat when they got in, they knew something was wrong. Harper’s lips had turned blue, her jaw was clenched shut and white foam was frothing from her mouth and nose. After their terrifying ordeal, Kirsti has a warning for all parents …

April 4 should have been an idealistic family outing for Kirsti and Christopher. The pair set out at 2:30 for an afternoon of shopping with their two young daughters.

At around 6:30 they left for home. The journey took 1 hour and 45 minutes, with Harper strapped into her car seat as usual. When they got in, the three-week-old spent another 15 minutes in her seat as Kirsti and Christopher put Malena to bed.

When the couple took Harper from her car seat, though, they spotted terrifying symptoms and immediately raced her to hospital.

“When we got home it was way past Malena’s bedtime so brought Harper in in her car seat and she stayed in there for 15 minutes as we got Malena into bed,” Kirsti said, as per the Daily Record.

“My husband got Harper out and put her on his knee but she looked like she couldn’t get comfy so he laid her down on her mat and she was kicking about.

“I told him her lips looked blue and then he pointed out how red her cheeks were. He picked her up and I could tell straight away from his face that something was wrong.”

Despite Kirsti’s fears that she would lose her baby, medics at the hospital were able to resuscitate Harper. They warned the parents that babies that spend more than an hour in a car seat are at risk of suffering from oxygen deprivation. It turned out Harper had suffered a seizure as a result of her oxygen levels plummeting. When the baby had been laid upon the floor, the sudden increase of oxygen caused her to fit.

Now, Kirsti is doing her best to warn other parents over what she believes to be a relatively hidden danger: “When the consultant told us it was the car seat I couldn’t believe it. I thought ‘there’s no way’. I couldn’t understand why nobody had ever told us.

“We had obviously heard about not keeping babies in car seats overnight because it causes curvature of the spine but not about anything like this.

“When my wee girl was a baby we did four-hour drives down to visit family in Cornwall and we had never had any problems at all.

“The doctors did tell us in hospital that it is usually a concern with premature babies but Harper is a big girl. She was 8lb 5oz when she was born and she’s 8lb 9oz now.

“After we got my head around that being the reason, Christopher and I felt so angry at ourselves – we felt like we did this to our baby. It was horrendous.

“But we’ve spoken to so many people and they had never heard about it either and then some people have conflicting opinions on the time.

“That’s why we knew we had to share what happened to Harper because parents need to know. Just two hours in a car seat and we could have lost her, it’s terrifying.

“I would tell every parent to just really carefully watch their babies and if they don’t absolutely need to be in the car seat take them out because it is not worth what we had to go through.

“Watch your baby and know your baby. If something doesn’t seem quite right take them straight to hospital.”

Fortunately, Harper was able to make a full recovery and is perfectly healthy, but the situation could have been so much worse had things played out differently. Thankfully, Kirsti and Christopher acted quickly as soon as they realised something was wrong, and the medics at the hospital were able to save the day.

Did you know about the danger to babies from staying in a car seat for too long? Share this story and spread the word to family and friends. It could save a young life!