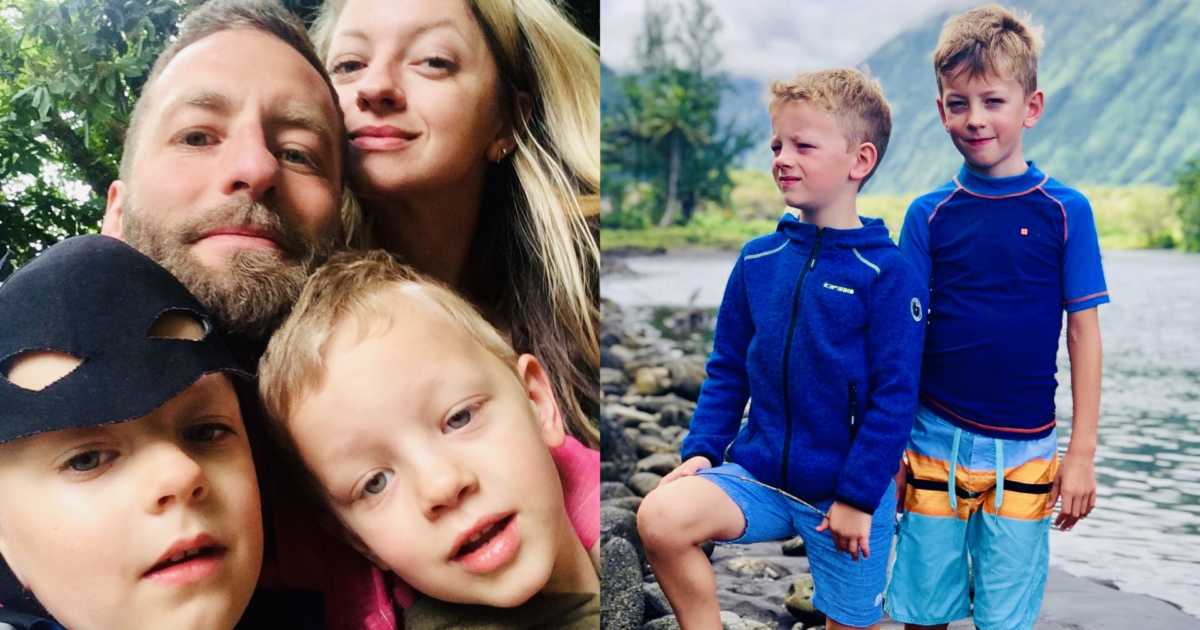 As a parent, you’re sometimes guilty of taking your children for granted. I know, it shouldn’t happen, but sometimes it just does.

We get so caught up in life and its demands on us – whether that be work or other things – we forget that it’s the simple things that matter so much … such as making memories.

Losing a child is every parent’s worse fear and the heartbreak it must cause is unimaginable to those of us who still have our precious babies.

Dr. Jessica Brandes, from Oregon, went through this unimaginable experience when her 8-year-old son, Wiley, passed away in his sleep back in 2019.

In August 2019, Jessica Brandes was at home with her two sons, Wiley and Oliver. Everything was as usual that summer morning – except that Wiley seemed to be sleeping a little longer than usual. Jessica didn’t think too much of it; she just thought that her boy needed a little extra rest.

In a heartbreaking post on Linkedin, the Oregon-based naturopathic doctor tells us what happened when her whole world was shattered in pieces.

Newsner has spoken with Jessica and she has given us her consent to republish her post. Please read it!

“I am a mother to 8-year-old twin boys, Oliver and Wiley. I am bound to this identity the same as I am wife, doctor, daughter, female. Things that are unchangeable in my mind.

Our son, Wiley, recently died. Our culture is trained to give people space around an event like this. It’s considered rude to ask what happened and why and so the only words left are ‘I’m so sorry.’ We are grieving intensely, but one of the best things we can do is share our story with you. If you can handle it, please ask us about our son’s life and his death. We heal in small bits while talking about it. If you haven’t had a chance to meet with us in person, then read his story here.

In general, he was happy and healthy and had been to his pediatrician, eye doctor and dentist all within one month of his death. He was smart, artistic, ambitious and funny, an incredible dancer, excellent taste in music and movies. He had the most gorgeous blue eyes; was tall with huge feet and seemed to be outgrowing everything within 2 weeks. He was mature and understood complex world concepts like religions and different forms of politics. He had been to 10 countries and had lived in London for 18 months of his life. He had driven a car and kissed girls and fell in love with one. He never knew heartbreak and while we will forever know that pain, I think it’s incredible that he loved and never experienced the pain of romantic rejection.

The only clue we have for explaining his death began 9 months ago. We were traveling and he was sleeping in a strange bed in an Airbnb. My mother-in-law and I heard a significant thud and rushed into the room to see what had happened. He had fallen out of the bed and was actively having a tonic-clonic seizure. To our knowledge, this was the first of its kind and certainly the first one we had ever witnessed. He recovered, as most people do from a seizure with no memory of the event whatsoever and we immediately visited his pediatrician who subsequently ordered an EEG.

Wiley was diagnosed with Rolandic Epilepsy. This specific form of nocturnal epilepsy is a ‘childhood’ form and ‘benign.’ We consulted with 2 neurologists in the US and in the UK. These highly trained physicians told us he’d suffer no cognitive deficits, that he would outgrow his condition and that his prognosis was incredibly good. When we asked about medication, they all said no. The side effects would be worse than the condition we were treating. Since he was incredibly unlikely to have his life disrupted by this epilepsy, there was no reason to alter his life with side effects. His seizures were related to his sleep cycle and we vowed to keep his quantity of sleep as regular as possible so as not to trigger seizure activity.

We educated him on his condition, we told his babysitters and other parents when he had a sleep over. We were aware of status epilepticus and informed them all to call 999 or 911 in the event a seizure lasted more than 5 minutes. We had a seizure action plan filed at his school. We had never witnessed another seizure again.

9 months later, Wiley seemed to be sleeping quite late. I looked in on him and saw a peacefully sleeping child cozy in his bed after a long day of summer fun. He was not sick. There was no indication he was even slightly unwell. He went to bed tired and happy, well-fed having eaten his favorite meal and was sleeping next to his best friend.

I found him later in the morning after I became suspicious that ‘sleeping in’ had lasted too long. Oliver had been playing on an iPad next to Wiley and I found it strange that Wiley had not woken up and started playing as well. He was under a blanket and his feet appeared mottled. That was the moment. The moment I knew what was coming next. My eyes tracked up his legs as I pulled the blanket back and I traced the deep purple color of lividity. This extreme color change indicated to me my son had been dead for at least 8 hours. I felt for a pulse and somehow felt surprised by the cold skin I touched. There was no emergency, no opportunity for intervention where I could have changed the outcome. He was gone and I knew events would move very quickly. I started to call 911, but hung up because there was a more important call I needed to make.

I called my husband at work. We have a rule. We never call unless it’s incredibly urgent. A text will suffice if it isn’t. So, when one of us calls, the other answers—no matter what. He did answer and I simply told him, ‘Wiley’s dead.’ I couldn’t sugar coat this and I didn’t have time to explain. I needed him to come home, and I told him I still needed to call 911. When I finished that, I knew I had approximately 4 minutes to explain to Oliver that his best friend had died, and 15 people were about to swarm our home. I asked him to pick a location where he would feel safe. Then, sirens.

The first responders came rushing up the driveway with gear and equipment and I begged them to slow down. Nothing could be done, there was no rush and I didn’t want to scare Oliver. I also didn’t want Wiley to be an educational experience, so I asked them to disturb him as little as possible while doing their job. None of us in the room expected anything different, but none of us wanted it to be true. They confirmed our son’s death using cardiac leads and slowly returned their equipment back to their truck because even an entire truck of life-saving measures couldn’t be used to save this one.

Police arrived because any unexpected death of a minor is a potential criminal event. They barricaded our son’s room and guarded our property until their investigation was complete. This was the moment my husband arrived home; driven by a co-worker who did not know our family, but who quietly participated. He came bursting through the front door and headed for our children’s room, but was stopped by police and abruptly turned his attention to the scared, lonely boy outside. The process took 2.5 hours. 2.5 hours passed incredibly slowly while we begged for the ability to hold our son’s hand, body, touch his hair. We were finally granted this opportunity, but our time was limited. It was not the way a parent should have to see their child, but it was all we had. We held his hand and fixed his hair and kissed his head until our time ran out.

J.R. walked our son out of the house with the Medical Examiner and then one by one, the cars all drove away just as quickly as they had arrived leaving J.R., Oliver and I standing in our driveway in a completely different world then the one we had woken up to.

We believe Wiley died of a phenomenon called SUDEP (Sudden Unexplained Death of Epilepsy). If you think of brains as being the computers of the body, Wiley’s just turned off. No known trigger, no warning. It just shut down and without a brain, there is nothing. Wiley’s cause of death will take approximately 4 months to officially declare. There is no proof of SUDEP and so everything else even remotely possible must be ruled out. I take solace in the fact that it was peaceful. Wiley was warm and happy and asleep in his favorite place next to someone who loved him. If I were to design my own death, it would be exactly that.

The weeks that followed were and continue to be a dizzy blur of people, apologies, food and flowers. Our family of 4 now has to learn to be a family of 3. We’ve lost our son, and Oliver has lost his twin and his perpetual best friend since before birth. We’re going to work on this new life—how to live it as best we can. We are navigating uncharted waters and we will be for the foreseeable future. When you see us, don’t be afraid to mention Wiley. We love him and always will and we are doing our best to hold on to the amazing and expansive space he occupied here on this Earth.

If we’ve learned anything at all, it’s that life is fragile, and time really can be so cruelly short. We wish a lot of things were different, but mostly, we wish we’d had more time. If you are a parent and have any capacity to spend more time with your kids, do. When it ends, there’s just photos and leftover things and time is no longer available to you. It is priceless and should not be squandered. Take your vacation days and sabbaticals and go be with them. You will not regret the emails you forgot to send. From now on, if you email or text me and my reply takes longer than expected, know that I am with the people I love sharing my time, creating my new identity, and I encourage you to do the same.”

Thank you for sharing your story, Jessica.

And thank you for not being afraid to introduce us to your son. Thank you for sharing your sadness, joy and love with the rest of the world. Thank you for your honesty. Thank you for teaching me that it’s ok & welcomed to speak about someone who has passed away without having to feel like I’m embarking on a taboo subject. You are still very much a mom of twins, one is just still tethered to his roots, while the other has already grown his angel wings. Please share!