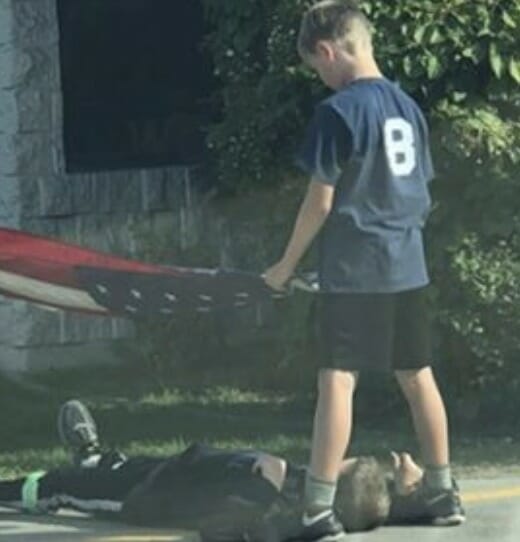 Though a country’s flag may be a trivial token to some, there are still those who look upon them as beacons of hope and security, with passion in their hearts.

Arguably there’s nowhere this is more evident that in the United States of America, where students in schools up and down the country raise and lower the flag routinely.

Which is why parent Amanda Reallan knew she had to get a photo when she turned up to Hayden Meadows Elementary School to pick up her children one evening. Whilst waiting for the kids, she spotted three other students taking down the American flag … her image and it’s accompanying caption have since gone viral.

As per Inside Edition, Amanda Reallan was left stunned when she ventured to Hayden Meadows Elementary School to pick up her children.

She was impressed by the way three students went about their duties when it came to lowering the school’s flag, folding it and making sure it was stored appropriately.

In particular, their attention to detail left an impression. Two boys worked at folding the flag, with the third boy literally lying underneath it to save it from hitting the ground if it was accidentally dropped.

Reallan knew she had to get a photo. The resulting image proved a huge hit online.

?? ❤️Viewer Amanda witnessed this outside Hayden Meadows Elementary School and said the following:"Wow! I just…

“Wow! I just watched the most amazing act of Patriotism! Was waiting to pick up my children from school when three boys took down the flag,” she wrote.

According to reports, custodian and Air Force veteran Mac McCarty selected the boys for the job at Hayden Meadows. He thereafter trained them in how to take proper care of the American flag.

“I’m a 20 year veteran of the United States Air Force, my father was a Marine, my grandfather was a Navy man,” McCarthy told KHQ.

As for the boys themselves, Naylan Tuttle, Jack LeBreck and Casey Dolan revealed to KHQ what they’ve learned from looking after the flag.

“This is our nation’s flag, this is our school’s flag, it’s how we represent our country,” Jack said.

Their parents can certainly be proud of them. If they attend all aspects of their lives with the same meticulous care as the flag, they’re definitely on the right track.

Share this article if you love the United States of America!