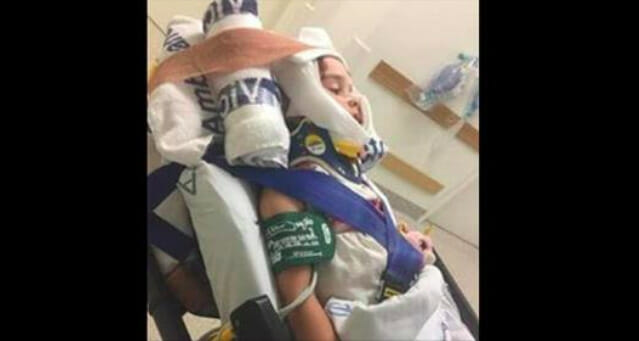 There are some moments as parents that we feel we could take a deep breath and just relax. Our kids might be quietly reading a book, playing with their toys in the living room, or just laying safely on their bunk beds…

Or is this really the case?

Mother Elizabeth Louise heard in horror as her 7-year-old Tanya screamed out in pain while they were attending a friend’s birthday party recently. But the mother could never have imagined that the cause of her daughter’s cries would be a ceiling fan.

Elizabeth and her daughter Tanya were enjoying their time at a birthday party one day when the unimaginable happened.

Tanya was upstairs in her friend’s room, laying down on the bunk bed, when another guest innocently turned the ceiling fan on.

Moments later, Tanya stood on the bed, not realizing the fan was on. That’s when it suddenly slammed into her, severely slashing her face.

Elizabeth frantically called for an ambulance and they were rushed to the emergency room. On their way, the 7-year-old turned to her mom and said: “I don’t want to look ugly.”

Upon examination, doctors discovered that the accident had created a massive wound on Tanya’s face and caused nerve damage. She will now be forced into plastic surgery, and is unable to smile or feel anything on the affected side of her face.

“I’m heartbroken for her knowing she will have a massive scar across her face,” Elizabeth told Kidspot. “Hopefully (this) can be fixed but we won’t know if it is for a couple months.”

The mom later shared photos of her daughter’s terrible injuries on Facebook in hope of warning other parents about the dangers of combining ceiling fans with bunk beds.

The post has since spread like wildfire, with hundred expressing their sympathy for Tanya’s horrifying predicament and wishing her a speedy recovery.

At the sound of her seven-year-old daughter's piercing scream, Elizabeth raced inside to see Tanya clutching her face with blood pouring down her cheek. WARNING: Confronting images

“My little princess is out of surgery and feeling good,” she wrote in an updated comment on Facebook. “She is one brave girl definitely braver than mummy. All she wanted to do when she woke was to colour in and eat pancakes.”

Elizabeth added her plea to all parents: “Please please don’t have bunk beds near a ceiling fan.”

I never saw ceiling fans as dangerous at all! This was a real eye opener! Please share with all the parents you know in case they have bunk beds and a ceiling fan at home. This terrifying but very avoidable accident has to be prevented.