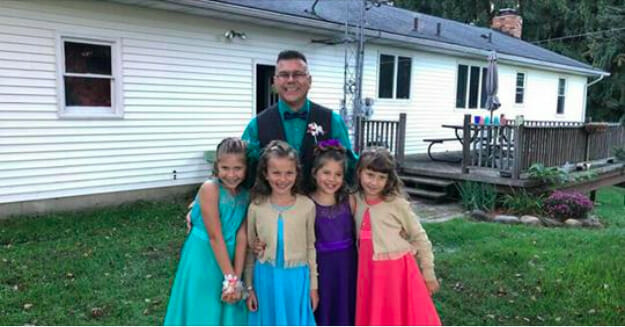 Family is most precious — and anyone who’s ever lost someone unexpectedly knows this better than anyone.

Unfortunately, this was the case for mother of 5, Shelly, from Davison, Michigan.

Her loving husband, Luke Reece, was well known in their community for being a great dad and hard worker — so when he passed away suddenly at just 32 years old after getting blood clots, the town was in shock.

But no one was more shocked than Shelly and her five children, and they tragically wondered how they could possibly continue living without him.

Luke was a warm, loving father and hard-working member of the community. His sudden passing shocked everyone, and things would surely never be the same for Shelly and her five children.

When members of the community heard out about Luke’s sudden illness, many rushed to the hospital to see him, knowing his death was imminent. One such member was one of their daughter’s former teacher, Steven Culbert, who visited Luke on several occasions to help support the family during this most difficult time.

Eventually, as Luke’s condition rapidly declined, Steven visited him one last time with a special request: that Luke would give him permission to take his two daughters, alongside Steven’s own two girls, to the upcoming Daddy-Daughter school dance.

But amidst the unspeakable sadness that followed Luke’s death came moments of hope thanks to the kindness of so many. And when the day came for Steven to fulfill his promise, Shelly was profoundly moved.

“Wow! There are not enough words to express my gratitude to this humble giving teacher and friend and everyone involved to make this a night to remember. He has wrapped his arms around my girls and made sure they know he is there for them since Luke’s passing,” she wrote, adding.

“He has always been a teacher and role model children could look up to, he goes above and beyond for all his students. He visited us while Luke was in the hospital, and while there he asked the girls to be his and his girls’ special dates for the daddy-daughter dance.”

A Day to Remember

Shelly describes the events of the big day.

“He, among many other giving people, made sure this was a day to remember. The morning started out with him taking them to breakfast with his sweet family, off to the park to play, then to Stonegate where he got their hair and nails done, of course, hit their favorite-McDonalds.

Later he traveled out to North Branch where the girls were in their Aunt Laura’s wedding. We got them in their dresses picked out for them and their corsages all bought by other parents. They were surprised when their ride was a limo (thank you, Mr. Matt, for driving) to the dance, all four girls were so tickled and excited.

They even ended up getting ice cream after the dance.”

The girls got to enjoy and smile whole-heartedly for an entire day thanks to Steven’s wonderful plan.

“They had so much fun and after an emotional day at Aunt Laura and Uncle Will’s wedding, this made their night. They have not stopped talking about it and love the necklaces they received.

I can’t thank you enough Mr. Culbert and everyone else that made this day happen. Thank you to his little girls for sharing your daddy.”

The night of course, ended with the Daddy-Daughter dance in which Steven was the perfect gentleman and the little girls could dance the night away.

It’s so moving when members of the community step in to do their part when tragedy hits a family. Steven Culbert is nothing short of a hero — his small act of compassion sure went a long way in the eyes of these little girls. We wish the Reese family all the best in the world and hope to see more Stevens out there!