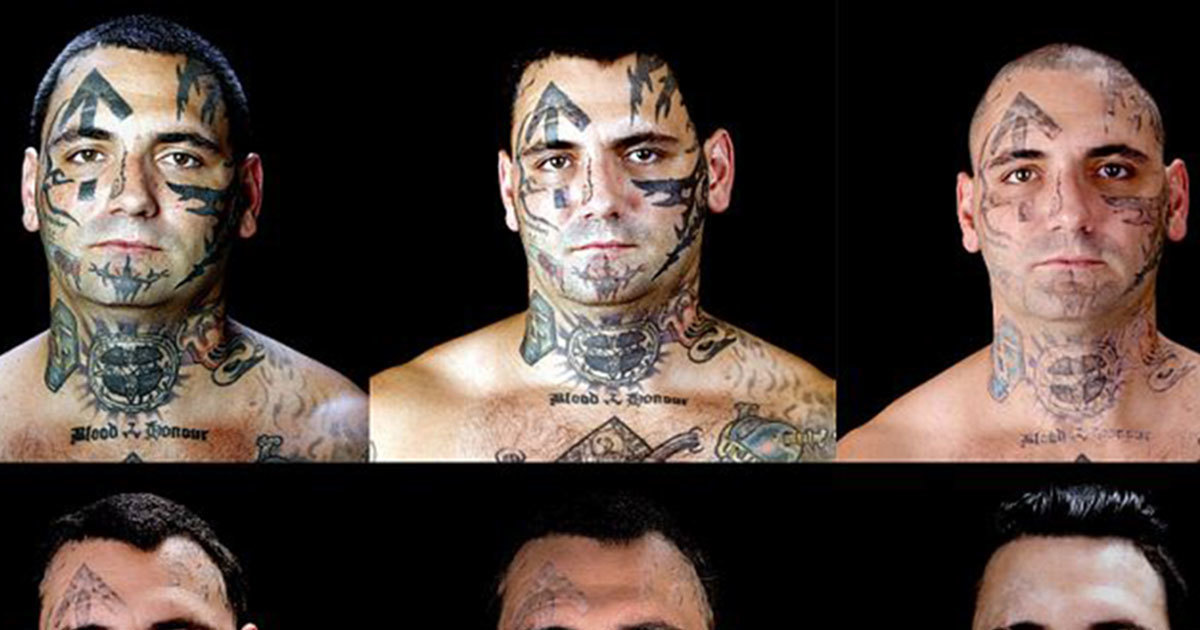 Bryon Widner was only 14 when he became a skinhead. He wanted to impress a family member and so began a 16-year stretch in that racist and violence-filled world.

Bryon’s life was ruled by white power and right-wing extremism, and he went on to co-found a white supremacist organization in Indiana called Vinlanders Social Club.

The group quickly became known for its violence, and at one point was one of the fastest growing white supremacist organizations in the United States.

One of Bryon’s relatives was involved in the white power movement and got Bryon started on the track. Bryon soon had his face tattooed with right-wing extremist symbols and started a life marked by drugs, violence, and incarceration.

But Bryon says that he realized he didn’t hate anyone. He hated himself and just projected it on others.

Now, Bryon has nightmares about the people he hurt. He’s assaulted countless people and worries about whether anyone he’s harmed has become permenantly disabled.

Bryon’s turnaround came in 2005 when he met his wife, Julie, at a concert. She was also involved in the white supremacist movement, and the two fell hopelessly in love. They got married the next year. Julie had four children from a previous relationship and the couple soon had a son together.

Bryon, who was notorious in white supremacist circles and earned the nickname “Pitbull,” felt it was time to leave his destructive past behind him.

It wasn’t easy getting a job looking the way Bryon did. And it wasn’t easy breaking away from his old life. Bryon was constantly threatened by his former friends.

He also wanted to get rid of his tattoos and be someone that his son could be proud of and not ashamed of.

There were only a few people who could help Bryon, but they were all too expensive. So Bryon began looking into DIY solutions, including pouring corrosive acid on his face.

Bryon’s wife saw how badly he was doing and wanted to help. So she did something that would have been unthinkable in the past.

He has long been a thorn in the side of white power groups, publishing their names and addresses, and warning the public about their activities.

Despite his past grievances, Daryle understood that Julie really needed help and helped her get in contact the Southern Poverty Law Center (SPLC).

Julie got in touch with Joseph Roy, chief investigator of hate and extreme groups at the SPLC, and the person who gave Bryon the nickname “Pitbull.”

Joseph says that it was like “the Osama Bin Laden of the movement ” called him.

SPLC is a charitable organization that has successfully managed to identify and track extremist groups, and even bring them down with expensive lawsuits.

It’s not unusual for defectors to contact the organization and ask for help, but it’s very rare for them to actually change their minds.

But after several conversations with the couple, Roy felt that they were different. So after a few weeks, he decided to go to Michigan to meet with them. And that’s when he decided to do something very unusual.

Roy asked the SPLC to search for a donor who could pay for Bryon to get rid of the tattoos that covered his entire face.

Roy didn’t have high hopes, but Bryon agreed to speak at the SPLC’s annual Skinhead Intelligence Network conference, with police officers from across the country in attendence.

Meanwhile, life became tougher for the family. Bryon had difficulty getting a job, and was still getting threats, which eventually made them have to move.

A few months later, Roy called. A woman wanted to pay for Bryon’s surgery. She had a few conditions, though.

She wanted to remain anonymous, and she wanted Bryon to study and get therapy. This was something Bryon had always dreamed of, so he was obviously overjoyed.

Dr. Bruce Shack, who agreed to perform the operations, knew that Bryon had a lot of tattoos but he was still shocked when he first saw him. It was like his face was a canvas.

A total of 25 operations took almost 16 months to perform. Each one was extremely painful, but Bryon didn’t give up. Dr. Shack and the nurses marveled at Bryon’s determination. Then on October 10, 2010, Dr. Shack performed the last operation.

Dr. Shack said that removing Bryon’s tattoos was one of the biggest privledge’s of his career, but the greatest honor was getting to know Bryon and Julie.

Bryon’s body is still covered with tattoos, but he has covered the ones with hateful messages.

Now, the family has completely left their past behind them, including throwing away all of their old photos. But there is much left to remind them, like Bryon’s tattoos and their son Tyrson, whose name is inspired from their previous faith. But how can they ask a 4-year-old to change his name?

From pure hatred to become a loving father, Bryon’s incredibly difficult journey really moved me. Please share it with your friends. It’s never too late to change.