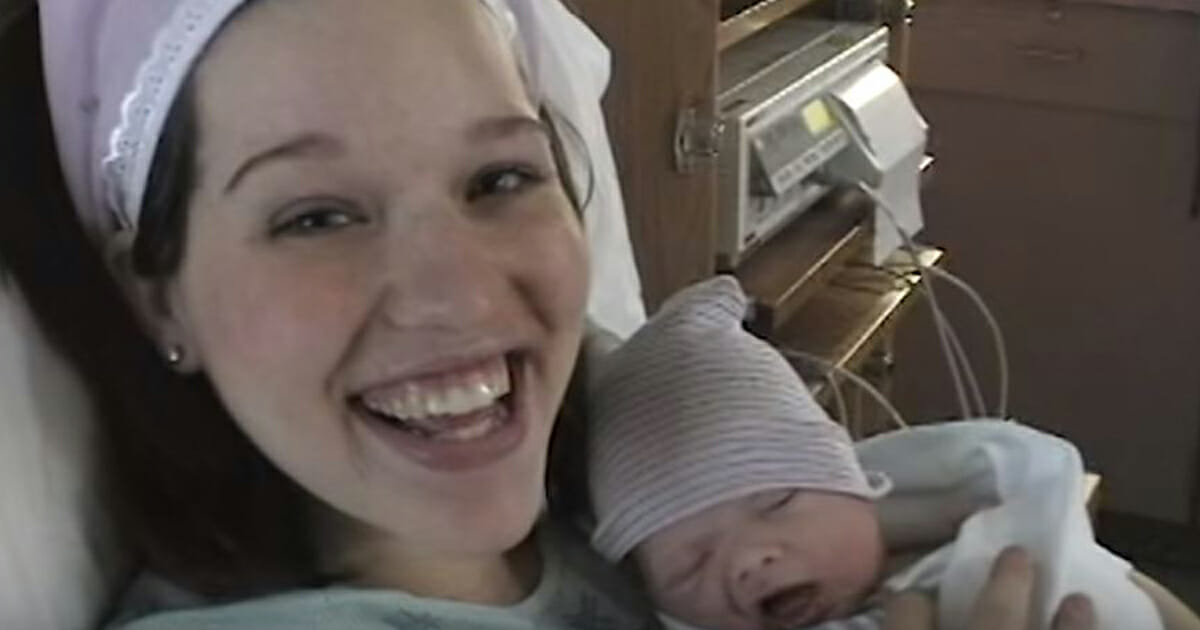 Becoming a parent for the first time is a moment you’ll remember for the rest of your life.

Although you’ll be flooded with all kinds of emotions from joy to fear, overall the experience for most people is one that they hold close to their hearts and wish they could go back to.

That’s what life was like for Kellie Haddock and her husband AJ when they welcomed their son AJ into the world 10 years ago.

But sadly, tragedy was just around the corner.

When Kellie and her husband AJ delivered their first son Eli in 2004, they were ecstatic. New dad AJ lovingly documented every moment in a home video that he planned to build on as Eli and the family grew.

Watching the tender home footage, it’s clear that AJ was besotted with his son. The young family were the picture of happiness that most of us strive towards.

But when Eli was just 14 weeks old, the family were driving on a Florida highway when they were caught in a horrifying car crash.

AJ died on the spot.

Meanwhile, baby Eli suffered a traumatic brain injury. Every minute it took to get him to the hospital was critical, and he and mom Kellie were rushed to the Arnold Palmer Hospital for Children.

“I am riding in a helicopter and I hear the steady whooshing of the blade over my head. I’m strapped down on the gurney and look to my right. I see our tiny baby boy, fighting to cry but not making a sound, pale with wires sticking all over him,” Kellie remembers on her website.

But when they reached the hospital, Kellie was in for even more bad news.

Eli had sustained serious injuries in the crash, and doctors warned Kellie that if he survived, he might never be able to walk or talk.

But incredibly, Eli did survive. And in 2014, Kellie felt that there was something she needed to do.

“It’s now 10 years later, and I want to find the team of heroes that helped saved my son’s life,” she says in her video for The Thank You Project, which has been viewed more than 500 000 times to date.

Together with a production team from Arnold Palmer Hospital, Kellie tracked down 25 of the health care workers who worked tirelessly to save Eli’s life. She wants to thank them in person – but that’s not all.

Kellie has since found love again and is married to a man who has adopted Eli and raised him as his own. Together, the family threw a ‘Thank You’ party to honor the medical team. There, they also got to meet 10 year old Eli.

“Eli’s alive, and he’s walking and talking and he’s showing tons of emotion, and he’s a joy,” Kellie tells Today.

Kellie’s heartfelt thank you not only helped her to move on, but it also brought some much deserved joy to the medical professionals who touched this family’s life, many of whom never hear from patients again once they’ve done their job.

“I’ve never been thanked. It’s not really a job you do for that. You don’t normally see people later,” said one of the nurses in Kellie’s video.

“You can go through a tragedy and still come out OK. There’s time for healing,” says Dr. Shoba Srikantan of the Arnold Palmer Hospital.

Watch the emotional reunion for yourself below, but make sure you have tissues at the ready!

Kellie and Eli's story is truly incredible, and is a real light for anyone going through a tragedy. There are always better times ahead. Please help us spread this emotional story further by sharing it with your loved ones on Facebook, and help us honor ALL medical professionals in the comments below.
Share