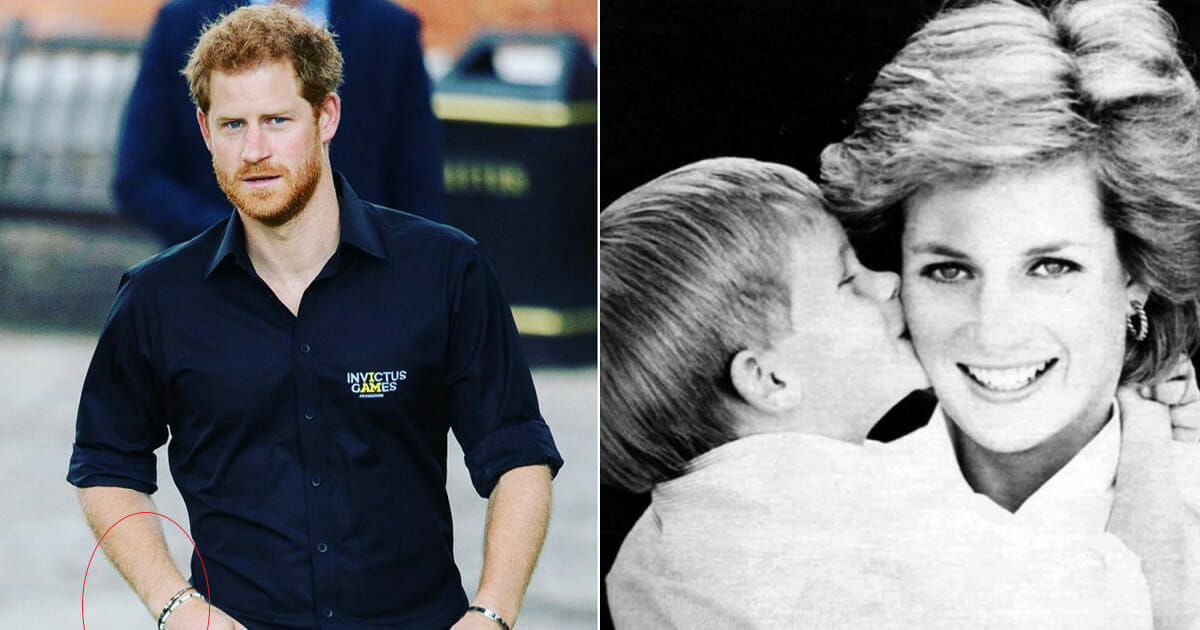 For nearly two decades, Prince Harry has been wearing a special symbol on his wrist, in plain sight for the world. From time to time, it’s raised questions from the British public. The gold bracelet seems to have a special story – it appears to be of great importance to the British prince, who married Meghan Markle earlier this summer.

On the day of the wedding, the accessory made another famous appearance, as we could see in both newspapers and from the TV broadcast.

It turns out the bracelet actually goes back to an emotional time in Prince Harry’s life. It’s related, in fact to the passing of the prince’s late mother, Princess Diana.

When Princess Diana died in the tragic car accident in Paris in 1997, she was adored by the whole world.

Many Brits ventured to Buckingham Palace to show their mourning by laying flowers outside of the walls. Diana’s boys, meanwhile, Prince William, then 15, and Prince Harry, 13, were obviously victims of the emotional chaos that losing a mother entails. Therefore, their father, Prince Charles, took his sons on an important journey.

Prince William, future monarch of the United Kingdom, was born on this day in 1982 at St Mary’s in Paddington, London – becoming the first royal baby to be born in a hospital. Delivered by the Queen’s surgeon gynaecologist George Pinker, William weighed 7lb 1.5oz at birth.

Harry spoke candidly in an interview with Town and Country earlier this year about his first memory from the continent. It was 1997, the same year Diana died.

“I first came [to Africa] in 1997, straight after my mum died,” Harry said. “My dad told my brother and me to pack our bags — we were going to Africa to get away from it all.”

Now, several media sources are reporting that the bracelet is in fact connected to Africa.

Woman & Home writes that it was during his first trip that Harry was given the bracelet, and that he wears it as a tribute to his beloved mother.

The wedding reception was a star-studded occasion of extraordinary glamour that was hosted by Prince Charles, featured music from Sir Elton John and concluded with an impressive fireworks display outside the historic 17th century venue. And Prince Harry and Meghan Markle's wedding reception is also said to have featured a 'naughty' speech from best man Prince William, a thanks from Meghan to the Royal Family for welcoming her in and a 'surprise' from compere James Corden.

In the picture above, you can see Harry wearing the bracelet during his wedding ceremony with Meghan Markle. Markle herself, of course, paid a tribute to Diana by wearing one of the late Princess of Wales’ rings.

Did you notice Meghan wear Diana's ring? Diana famously wore the emerald cut Aquamarine stunner to an auction of her own clothes at Christie’s in 1997. The jewel is part of a set — the other piece is an aquamarine bracelet, where it’s connected by five strands of pearls. She wore both to a gala dinner in Australia in 1996.

What fantastic sons Diana has, who forever aim to continue her legacy.

Please SHARE to show that there are still many people who miss Princess Diana.