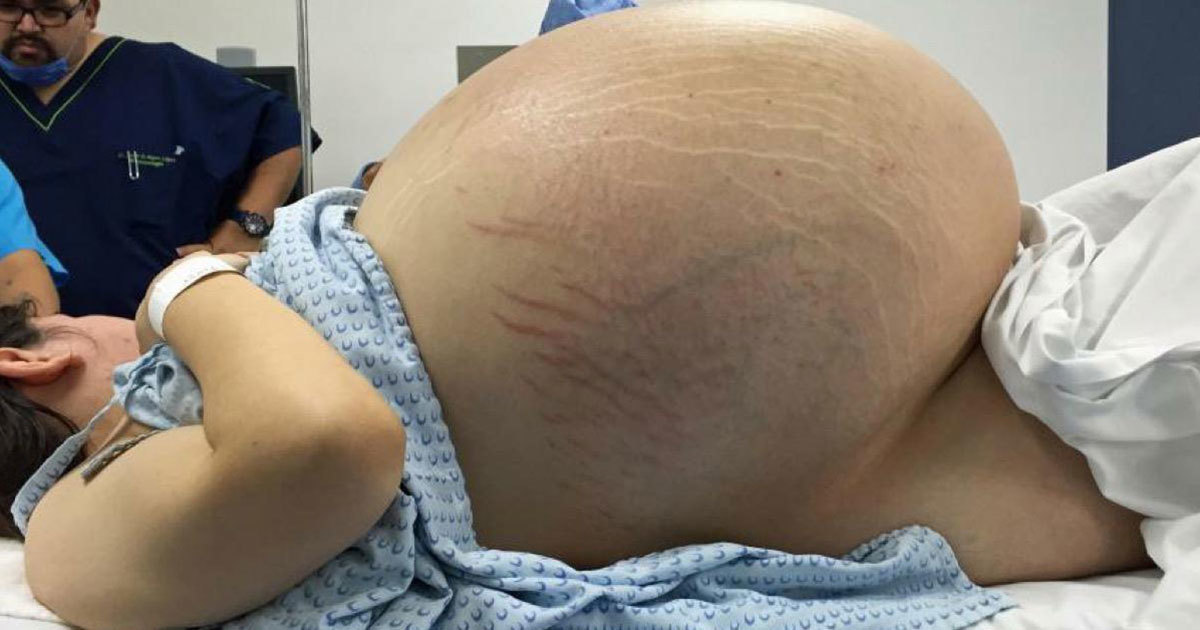 It was inexplicable. A 24-year-old woman from Mexico suffering from weight problems decided to go on a diet – but despite that her arms, legs and face were going down in size, her belly just continued to grow.

The situation got worse and worse. Soon, the woman had trouble walking, eating and even breathing – until she was finally rushed to the General Hospital of Mexico.

NOTE: Strong images below may be distressing to some readers.

At first glance, you would definitely guess that the woman was heavily pregnant.

Her stomach had grown into an enormous sphere – and no one could explain why.

It was a mystery.

Once at the hospital, the 24-year-old woman saw physician Dr. Erik Hanson Viana.

He immediately sent her off for x-rays – and when they came back, they revealed a frightening diagnosis.

The woman had an ovarian cyst that had grown to gigantic proportions.

The cyst was so large that it had already started to crush other organs in the woman’s body.

Her risk of a heart attack was imminent – and an emergency operation was unavoidable.

“This is the biggest cyst I have operated on, it was so large that it took up 95% of the patient’s abdomen,” Dr. Viana told the Daily Mail. “It’s really rare to operate on a cyst this big, it measured half a metre in diameter and the circumference was 157 cm.”

There were two options: either to drain the cyst slowly in liquid and then do a surgery, or a direct surgical removal of the cyst in its entirety.

Although it would leave a large scar and the operation was risky, the woman chose the latter option.

“But to remove it whole is also difficult because the cyst wall is less than one millimetre thin and needs to be prevented from drying out, otherwise it could easily break too,” Dr. Viana told the Daily Mail.

Since up to 20 percent of giant cysts are malignant, a ruptured cyst could lead to potentially tumorous cells leaking into the patient’s body.

But the doctors did an amazing job: the operation was completed without complications, and the cyst was safely removed.

It weighed a whopping 70 lbs, equivalent to about ten (!) newborn babies.

After the surgery, the woman’s stomach immediately shrunk to normal size.

Two days later she was able to leave the hospital… a comfortable 70 lbs lighter.

The 24-year-old was also left with much excess skin, but it was a small price to pay for being able to keep her life!

Six months later, she returned to the hospital for a follow-up.

She was fully recovered: she could stand upright, walk like a normal person – and was living a normal life.

“A big part of what we do is the gratification you feel when you could change a person’s life completely, and knowing they would never forget you, even if they forget to say thank you,” the doctor added.

Had it not been for the doctors’ unprecedented work, this woman’s life could have been lost. Don’t hesitate to share this story to pay tribute to all the amazing doctors and nurses out there who are doing everything in their power to save lives day in and day out!