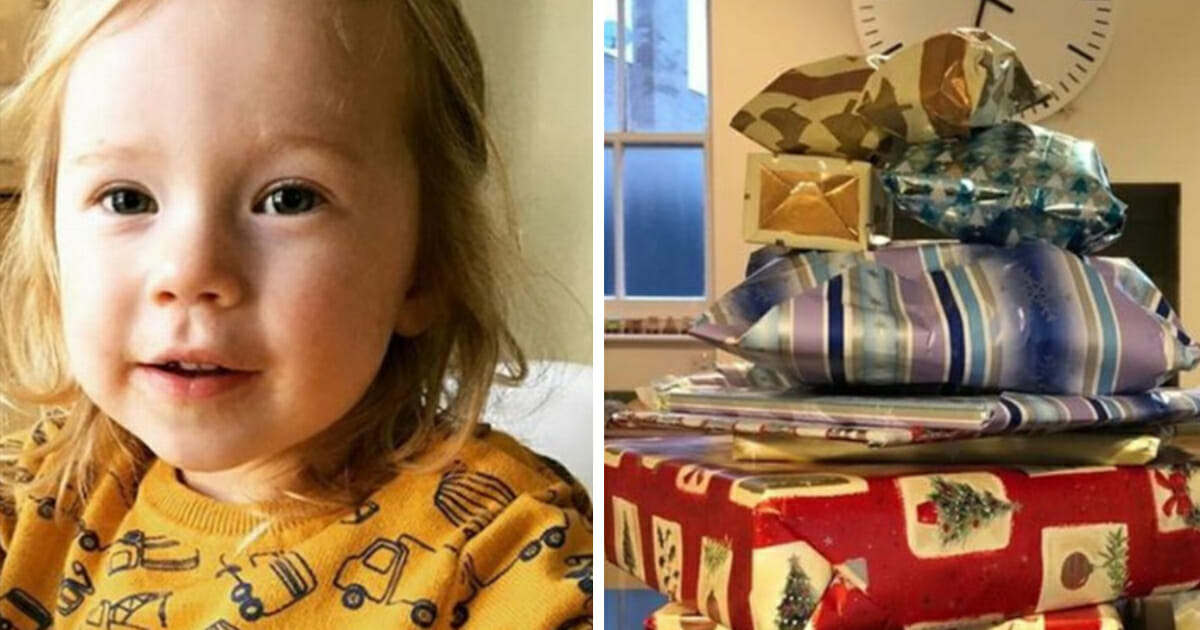 When we’re children, our neighbors are so often adults we respect and trust. They’re the ones we can turn to if we have a problem and our parents aren’t around; the ones that watch us grow up and become adults.

Anyone who says the spirit of friendly neighbors isn’t still alive need only read this story to have their faith restored.

A pensioner from Barry, Vale of Glamorgan, Wales, carried out the ultimate display of Christmas charity when he bought the little girl who lives next door to him presents for the next 14 years …

87-year-old Ken Watson passed away in October this year, but not before he prepared a sack full of wrapped presents for the daughter of neighbor’s Owen and Caroline Williams, 2-year-old Cadi.

Our elderly neighbour passed away recently. His daughter popped round a few moments ago clutching a large plastic sack. In the sack were all the Christmas presents he’d bought for *our* daughter for the next thirteen years. ? pic.twitter.com/6CjiZ99Cor

Dad Owen told the Ladbible: “She called around last night and she was on the doorstep clutching what looked like a rubbish bag and I just put two and two together and I just got 18. I assumed she wanted me to put out some rubbish for her.

“Instantly I said ‘yep, no problem’. Then she said ‘these are the gifts that dad has left for Cadi for Christmas’ and it just blindsided me.

“I went into the kitchen and my wife was on FaceTime to her mum in Ireland and it was like Mary Poppins’ bag – I just kept pulling them out and they kept coming and coming.”

Just after tweeting about the inspiring act, Owen ran a Twitter poll asking people what they should do with the presents: Open them now and rewrap them? Or have a lucky dip until 2032?

What do you all think?

Speaking of Ken, Owen said: “When we first moved in he was up on the top of scaffolding this was September 2015 he had two sections of scaffolding at the front of his house it was a 1920s property – very high, he was on top of a ladder and using it as a pogo stick to jump from one scaffold to another.

“I did a double take and mouthed [to a neighbour] ‘what on Earth do I do?’ and he said ‘I have no idea’ – he was bouncing the ladder. Then he came down to meet me I said hi and we gave him a bottle of wine.

There’s some press interest in this story, so let me tell you a bit about the man:

The first time I met him, he was bouncing a 20ft ladder across the face of his house.
He was on top.
He was 83 at the time.

Now, Owen is calling on people all over the world to make an effort to meet and get to know their own neighbors. He said: “What struck me in the messages I’ve received is how many people don’t actually know their neighbours.

“One thing I would say to that is that our friends and family will always be there for us but they’re not physically there for you. Your neighbours on the other hand are both literally and physically in the next house or just across the road.

“In a time of crisis you can turn to your friends and family by all means but theoretically your neighbours are immediate. They’re the people that would rescue you from a house fire or if all the slates fell off your roof.

“In terms of a Christmas wish I would say, just say hi to your neighbours and there’s no better time to do it. Take a bottle of wine or prosecco.”

We're definitely going to open one every year till 2032, by the way. It'll be our way of remembering an immensely generous gentleman – our new Christmas tradition.

We'll add the pics to this thread for as long as Twitter is still a thing!

That’s certainly a sentiment we can get behind!

What an inspiring move by Ken! Little Cadi is so lucky.