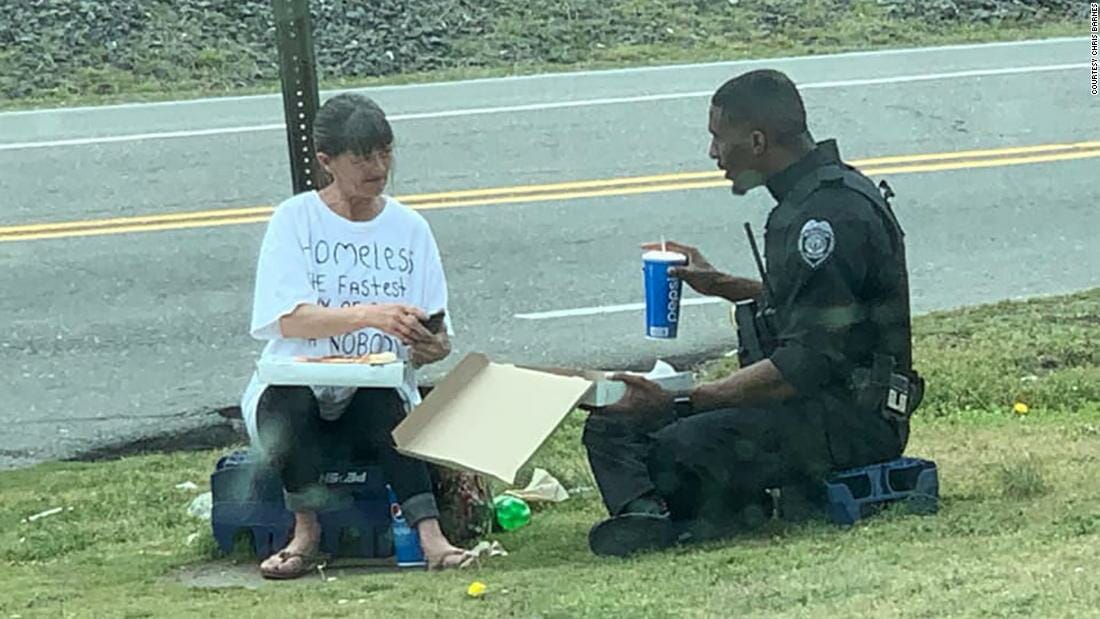 In today’s climate it’s more important than ever to show our support and love for others who might need it.

Officer Michael Rivers is a veteran of the Goldsboro Police Department in North Carolina and he knows the above to be true more than most.

Officer Rivers recently came upon a homeless woman he had never seen before. Since he knows most everyone in his community, this in itself was strange to him. It was her shirt, however, that really caught his eye.

“Homeless. The fastest way of becoming a nobody,” it read, as per CNN.

Officer Rivers had his window down so the pair made eye contact and greeted each other with a simply “Hey”. Rivers kept driving, only to realize that something kept tugging at hime to go back.

Rivers grabbed two pizzas from a nearby pizza shop and sat down on the grass next to the woman. The two shared food and conversation, the latter of which Officer Rivers said he greatly enjoyed.

The homeless woman, who identified herself as Michelle, sat and talked with Officers Rivers for 45 minutes, sharing life stories and positive words.

Little did they know that their encounter was captured by a passerby whose husband shared the photo to Facebook.

Chris Barnes wrote in his Facebook post: “Law enforcement does so much for our community, with a lot of it going unnoticed. We see you Goldsboro P.D. Keep up the good work.”

The post has since garnered nearly 1,000 likes and more than 3,000 shares, with people quick to praise Officer Rivers for his compassion.

As per CNN, Michelle explained to Rivers that she has a 12-year-old daughter in foster care who is battling liver disease. Not only that, but she has a 23-year-old son.

They ultimately finished their lunch and went their separate ways. For Rivers, however, the interaction made him realize how similar he and Michelle were despite their obvious differences.

“Homeless people are just people who are down on their luck,” he said. “It can happen to anybody.”

I don’t know about you, but I think Officer Rivers deserves praise and attention for his wonderful and compassionate actions.

Share this article to wish Michelle all the best in the future, and to remind people that kindness costs nothing and can work wonders.