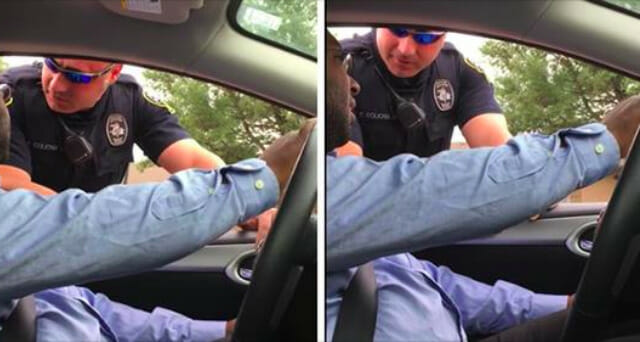 Revealing that you’re pregnant to the father is a big, special moment. Nowadays, it seems that more and more women are coming up with clever and creative ways to make such announcements.

Of course, there’s nothing wrong with doing it in a classic, simple way — taking a pregnancy test and discovering the verdict together.

When Nikk Rock was ready to tell her husband that she was pregnant and that he would be dad, she decided to take a rather unusual route.

After bouncing some ideas around, she finally decided to contact some police friends… and ask for their help.

Then, while on the road one day, they were pulled over by the cops.

When Nikk’s husband realized they were being pulled over, he immediately became nervous. What did they do wrong? His head was spinning.

The policeman approached the car and asked them to pull over. He was so nervous he started playing with all the different radio settings in the car.

The officer stepped forward and asked him to roll down his window.

Nikk’s husband realized that he recognized the officer. But when the he explained why he was pulling them over, Nikk’s husband was just further confused.

According to the officer, they were driving with a baby in the car, but no child seat.

“I gotta be honest. The reason why I stopped you is you have a child in the car with no child seat,” the officer said, pointing to the backseat of the car.

For Nikk’s husband, one part was certainly true — there was, indeed, no child seat in their car. But, as far as Nikk’s husband was concerned… neither was there a child!

The police questioned him again, eventually asking him to turn around and face his wife — who was holding up the positive pregnancy test.

A second policeman walked to the other side of the car and hands a gift bag over to the bewildered father, bidding the couple congratulations.

Nikk’s husband’s face just glowed with joy as he finally understood what was going on. He was going to be a dad!

Watch the event unfold below:

Feel free to share this story with your friends on Facebook if you agree this was a wonderful surprise.